TACLOBAN, Philippines—“I just want to help other people,” says 18 year-old Cristina Babon, a student and athlete from Tacloban City who recently won a gold medal in the region’s running competition. “I lost my uncle in the typhoon,” she explains calmly, “but my family's house was destroyed only partially, so I feel I have a duty to help those who have lost everything.” Cristina is one of more than 60 volunteers assisting UNFPA, the United Nations Population Fund, in providing critical care to pregnant and lactating women affected by typhoon Haiyan. 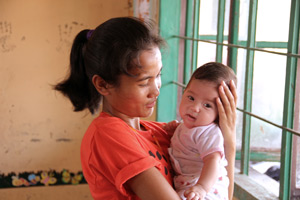 Cristina, a young volunteer with UNFPA in the Philippines, provides a ray of hope for pregnant women, mothers and their newborns amid the devastation left in the wake of super typhoon Haiyan. Photo © UNFPA

The devastation caused by the typhoon in Tacloban City and throughout the Leyte and Samar provinces is unprecedented. One month later, although the debris has been cleared up from most streets in Tacloban, many houses remain roofless or have been reduced to a pile of broken concrete. Although daily life has regained a semblance of normality, there is still no electricity. Entire barangays (traditional villages) were wiped out by a gigantic tidal wave caused by the typhoon—and many communities still live in tents. The typhoon killed more than 5,000 people and affected 15 million, including more than 3.2 million women and girls of reproductive age who are often the most vulnerable.

But the incredible resilience of communities and the volunteer ethos of the Philippines are shining through the destruction. It is estimated that volunteers throughout the country are feeding about 1.4 million survivors every day.

“We need to nurse our fellow Filipinos so they regain the strength to take care of themselves,” said President Benigno Aquino when he recently called for more volunteers at one of the food packing stations in Manila.

Coping with Disaster by Helping the Community

Youth volunteers, many of whom are currently out of school because of the disruptions caused by the typhoon, are assisting UNFPA in various ways. “I helped establish UNFPA’s medical missions by going around evacuation centres in Tacloban and identifying pregnant and lactating women,” says 21-year old Ronron Aruta.

Once women in need of medical care are identified, UNFPA teams conduct medical missions that provide prenatal care and family planning services. During these missions, volunteers also distribute dignity kits to pregnant women (these include basic hygiene items such as maternity pads, chamber pots, soap, and other items) and take care of children while their mothers are seen by a doctor or are attend an information session. 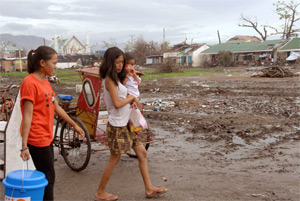 Mary Rose (left), 19, helps to carry a UNFPA hygiene kit for Evelyn and her daughter. Photo © William A. Ryan/UNFPA

For many young people, volunteering has become a way to cope while making them feel engaged in their community, instead of staying at home waiting for school to resume. “I didn’t want to sit and do nothing—I was looking for organizations that needed volunteers and my teacher told me about UNFPA,” says Ronron, who serves as a peer counsellor at his university.

The volunteer experience also offers a unique learning opportunity. “I’m very proud to be a volunteer,” says 19-year old Mary Rose Balintong. “It serves as training and it builds camaraderie —we can see the impact of our work in the women’s smiles.”

Youth volunteers have always been instrumental in UNFPA’s humanitarian response in the Philippines, one of the most disaster-prone countries in the world. Marlon Ellorimo, 23, and Wilmur Israel, 25, two dynamic staff nurses working with UNFPA in Tacloban, started as volunteers in 2011 after typhoon Bopha.

“When I first met them, they were sleeping in body bags,” says Ronnel Villas, UNFPA’s humanitarian coordinator in Tacloban City. The two schoolmates from the province of Davao Oriental had just completed nursing school and decided to join volunteer medical teams with the provincial government, working in very difficult conditions.

“My parents did not understand why I wanted to volunteer,” says Wilmur, “but I had volunteered all throughout college and it was something I needed to do.” Marlon and Wilmur fully embraced the challenge, sleeping wherever they could and eating relief goods, until they joined UNFPA’s reproductive health missions.
When Typhoon Haiyan hit the Eastern Visayas region, Marlon and Wilmur were eagerly waiting for Ronnel Villas’ call. And indeed, UNFPA immediately offered them to work in Tacloban—the two nurses’ dedication and passion had become indispensable for the organization.

Today, Marlon and Wilmur help oversee medical missions and run lively information sessions with pregnant and lactating women around Tacloban. During these sessions, women learn about basic hygiene and the importance of family planning, while also being entertained by the two nurses’ incredible sense of humour. “Volunteering gave us the confidence to exercise our profession,” says Marlon, “Filippinos endure together and move together—and for that, I will continue to work in humanitarian situations.”

In the coming weeks, UNFPA’s youth volunteers will return to high school and university. But like Marlon and Wilmur before them, most of them are committing themselves to continue volunteering with UNFPA. As for Cristina Babon, she also dreams of taking part in the Olympics one day. “Because of the huge damage caused by the typhoon, we don’t have stadiums to train in anymore,” she says. “But, I am still hopeful.”