PYONGYANG, Democratic People’s Republic of Korea — More than 35,000 North Koreans fanned out all over their country during the first half of October 2008 to knock on every door and interview an adult from every household and living quarter. Equipped with technical training from UNFPA and handbags carrying its orange logo, this dedicated group was participating in a long overdue exercise—the first population and housing census in the Democratic People’s Republic of Korea (DPRK) since 1993.

At the same time, a group of 12 international observers was invited into the country to monitor the process. Composed of both UNFPA and non-UNFPA demographic experts, the observers were led by Dr. Bernard Coquelin, UNFPA Representative in China and Country Director in DPRK, and the overall coordinator of the Fund’s support to the census. Grouped into five teams, the observers visited random houses and other residences in 56 cities and counties in each of the country’s 10 provinces. Their mission: ensuring that the enumeration was up to international standards, and that interviewers were not asking misleading questions, shaping answers, or abandoning responses they did not approve of.

The observers were welcomed inside a wide variety of residences, where they often sat on the floor to watch the census takers meticulously go over each of the census questions. Government interpreters answered questions by team members and sought their advice on any difficulties the interviewees might be having with the questions. 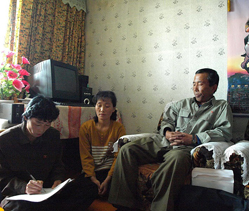 An enumerator elicits information from a family living outside of Pyongyang. Photo: Omar Gharzeddine

One such difficulty was the idea that, in the absence of the husband – whether he’s overseas or in another part of the country – his wife or somebody else should be recorded as the head of the household. Another had to do with the age at marriage. Some people would remember what year they got married, but not how old they were then. Despite these and other similar problems, however, all members of the team reported a smooth enumeration process.

People were expecting the enumerators and generally prepared for the questions, as they had already received messages about the census on TV and newspapers, as well as through posters distributed all around the country. The majority of enumerators—all with at least high school diplomas—proved to be very knowledgeable of their tasks, and very professional in carrying them out. This reflected their dedication to the census, and the rigorous training they had received.

Once the actual 15-day enumeration process was over, the DPRK Central Bureau of Statistics started the arduous work of processing the census data with technical support from UNFPA. A UNFPA technical advisor was based in the capital, Pyongyang, all through the process.

Processing the results presented many challenges, mostly logistical. The harsh winter, for example, hindered the transport of the questionnaires from remote locations to the provincial statistical offices, and then to the census headquarters in Pyongyang. Power interruptions also delayed the data entry process. 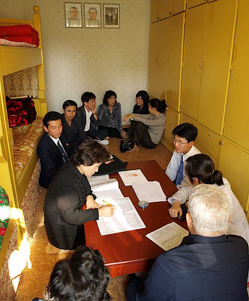 However, the bureau of statistics was able to meet the target it had initially set up for itself: disseminating preliminary information in early 2009 and the full results by year’s end. The DPRK census report (see below) was released during a national conference held in Pyongyang on 16 December 2009. The opening of the conference by the Vice-Premier of the DPRK Cabinet and Chairman of the State Planning Commission, and the participation of other high government officials, reflected the importance that the government attached to the census. After all, the results included critical information needed by the government for its socio-economic plans and policies. The results were also eagerly received by local representatives of the international community and other UN agencies, as they contained a wealth of information they would need for their future activities in the country.

UNFPA’s support started way before the actual census took place—by designing the questionnaire and planning the census itself, including conducting a pilot census in October 2007. And in addition to its technical assistance, UNFPA helped build the capacities of DPRK statisticians by providing them with training, both locally and abroad. The Fund mobilized $4 million from the Republic of Korea and 500,000 Swiss Francs from Switzerland—funds that were mainly spent on training, the hiring of international personnel, printing and the procurement of computers and printing machines. It also delivered essential equipment and supplies needed for the process, such as vehicles, paper, ink, computers and others. All this, coupled with the dedication of all involved staff, contributed to the success of the endeavor.

"UNFPA's support to the DPRK census is an excellent case study of our work on one of the Fund's three focus areas. It underlines the high expertise that UNFPA contributes to this very important exercise that is crucial to every country's prosperity," said Dr. Coquelin.

Findings from the 2009 DPRK Census

The DRPK’s total population increased by nearly 3 million during the period 1993 to 2008, reaching more than 24 million people. The increase indicates an average annual growth rate 0.85 per cent and reflects a fertility rate that has declined since the early 1970s, a decline that is attributed to wider use of contraceptives and later age of marriage. The 2008 fertility rate was found to be 2.0, slightly below replacement level, according to a summary of key findings.