The UNFPA Goodwill Ambassador in Germany, Alfred Biolek, has received the Federal Cross of Merit of the Federal Republic of Germany. The nation’s President, Johannes Rau, gave out the award that honours Mr. Biolek for his commitment and work as UNFPA Goodwill Ambassador. Also recognized was his support for young people in developing countries who are actively combating the spread of HIV/ AIDS and unwanted pregnancies. 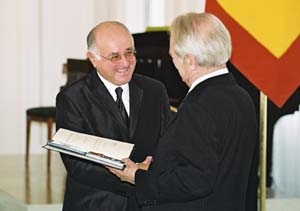 At the award ceremony in the German Head of State’s office in Berlin, President Rau stressed that Mr. Biolek had “helped to better other people’s lives and ensured them certain human rights.” While 45 people were bestowed this kind of award, the President personally handed it to only few of them, including Mr. Biolek.

The Federal Cross of Merit is Germany’s highest acknowledgement for extraordinary merit in common welfare. It is conferred each year on the occasion of German Unification Day, which marks the country’s reunification.