UNFPA Goodwill Ambassador Goedele Liekens traveled to Kabul, Afghanistan for a one day visit on 20 May. Despite the tight schedule of her trip, she was able to visit several key institutions and projects supported by UNFPA, including the Khair Khana Hospital, the Women’s Vocational Training Center at the Ministry of Women’s Affairs and the Central Statistical Office.

At the Khair Khana Hospital, which has been completely rehabilitated and reconstructed by UNFPA in 2003, Ms. Liekens toured the maternity ward and spoke with patients.

She also met with hospital authorities and a representative from the Ministry of Health. 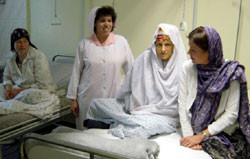 Ms. Liekens’ next stop was the Ministry of Women’s Affairs. There, she was received by the Deputy Minister, who accompanied her on a tour of the Women’s Vocational Training Center. UNFPA has been involved in the rehabilitation of the training center that offers women classes in literacy, languages and life skills, as well as vocational training.

Ms. Liekens also visited the Central Statistical Office. The director of the center expressed great appreciation of the UNFPA support for the Household Listing which will be completed in September. The listing, one of UNFPA’s major projects in Afghanistan, will help provide the government with the socioeconomic data that it needs for its planning and reconstruction activities and lay the foundation for conducting the proper census.