The United Nations Population Fund (UNFPA) has given new meaning to the life of a Portuguese film and theatre actress, Catarina Furtado, who recently made that revelation in an interview with a Portuguese magazine, CARAS.

Because of her work with the Fund, Ms. Furtado said in the magazine’s cover story, “my public life came to have new meaning.” “Deep down,” she continued, “I have always been very concerned about others, especially those who do not always have the opportunity to speak out.” 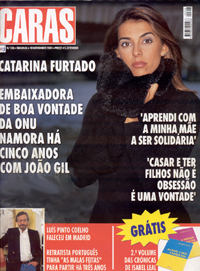 Portuguese actress and UNFPA Goodwill Ambassador Catarina Furtado on the cover of CARAS.

Ms. Furtado, UNFPA Goodwill Ambassador and Face to Face Campaign Spokesperson, told CARAS how she had reported to a meeting of European non-governmental organizations on her visit to Mozambique, where she saw face-to-face the social problems related to health, women’s reproductive health and teenage pregnancy.

“I had contact with children dying of malaria, three or four sleeping in the same bed, nurses asked me pleadingly for milk for children,” said the actress. “I saw incredible things, but I returned with a vision of hope, because the youngest ones are beginning to be aware of things.”

The Goodwill Ambassador said that she found the confidence of the young gratifying. “It is very easy not to do anything,” she said. “What is hard is to not be aware that we are an integral part of this world and that we have to do something. My job is to pass on all this information,” to those who can help.

Ms. Furtado said that she drew more strength to continue working for public causes as a result of her trip to Mozambique. “It’s one thing to read the statistics; something else to see it first hand,” she said. “When I am on those field visits, I have the feeling that things are truly real, and I come to the conclusion that some of us may be going through life fighting only for the sake of our own comfort.”

When Ms. Furtado visited Portuguese-speaking Mozambique, stories of economic and social distress and hope. Accompanied by members of the Portuguese Family Planning Association, she saw the effect of HIV/AIDS on the country. She also found people more willing to address the problem and reduce HIV/AIDS infection rates.

When she donated three computers to a youth counselling centre, the young volunteers "were so happy," she said, "that some of them cried and promised me that one day, I would be very proud of them. I am proud already because of their optimism and hope."

Later, during a visit to a hospital, Ms. Furtado said she was saddened to note surgical gloves being washed, dried in the sun and reused, as well as to see three or four sick children in one bed. On returning to Lisbon, Ms. Furtado learned that Portugal would donate a car to the outpatient department of one of the hospitals she had visited.