At the event, Ms. Obaid praised Tanzania for making the political and financial commitment to generate data for development planning to reduce poverty.

“The Population and Housing Census 2012 will take place just three years before the deadline to achieve the Millennium Development Goals,” said Ms. Obaid. “It will provide an opportunity to the Government of Tanzania to adjust policies so that the goals can be met by 2015.” 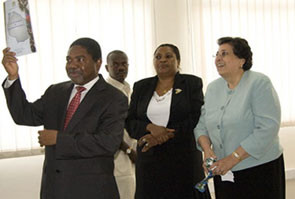 The census, the fifth to be conducted in Tanzania since its independence in 1964, is expected to cost $90.3 million. The last census took place in 2002 and recorded a population of about 34.5 million people. It is now estimated that Tanzania’s population will reach 45.8 million people in 2012.

Earlier today, Ms. Obaid delivered more than 400 boxes of contraceptives to the Tanzanian Ministry of Health in order to fill part of the gap in the country’s reproductive health supplies and to underline UNFPA’s support to improving the sexual and reproductive health of Tanzanians, including their access to voluntary family planning information and services. Access to family planning is considered one of the key interventions to prevent maternal death. Worldwide, about half a million women die every year in childbirth. In Tanzania, approximately 8,000 women die every year due to pregnancy and child birth.
The Vice-President of Tanzania thanked the United Nations for the important role it plays in supporting the government to improve maternal health and other development efforts.

“I would like to pay special appreciation to the United Nations system for the technical and financial support on population and development that Tanzania has received,” Dr. Shein said in his statement.

This event is part of Ms. Obaid’s five-day official visit to Tanzania to gain greater understanding of the achievements and challenges of the United Nations system in supporting Tanzania’s development and the achievement of the Millennium Development Goals.