KAMPALA, Uganda - In 2009, Barbara Kemigisa* learned she was pregnant, and also that she was HIV positive. The dual stigma she faced would be devastating to both her and her baby, she told UNFPA Executive Director Dr. Babatunde Osotimehin at a family planning conference in Kampala, Uganda, last week.

“My family rejected me because I was HIV positive,” she said. “I had nowhere to go. I lived on the street, and at times I would go to my friends’ houses. But I could not tell anyone that I was positive because I feared they wouldn’t want to live with me.”
The situation was compounded by her pregnancy. “You would have a nurse ask you, ‘Why did you get pregnant at such an early age?’ They make you feel like you have committed a heavy crime,” said Ms. Kemigisa, who is now 24 years old and an HIV activist. 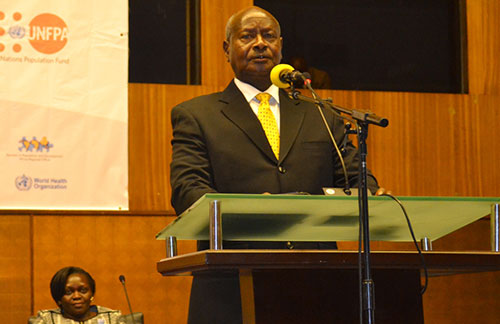 President Museveni voices support for family planning in Kampala, Uganda. Behind him is Sarah Opendi, State Minister for Primary Health Care. Photo credit: UNFPA Uganda
The conference, held from 28-30 July, focused on how voluntary family planning services can help accelerate development. The event, co-hosted by Uganda’s Ministry of Health and UNFPA, brought together health experts, development partners and young people to address ways to increase access to family planning services and information. The issue garnered vocal support from Government officials.
Family planning is increasingly recognized as critical not only for individuals’ reproductive health and rights, but also for economic growth. When couples are able to plan the size, spacing and timing of their families, mothers and children are healthier. Access to sexual and reproductive health information and services also improves girls’ school attendance, which leads to greater opportunities and yields benefits for the community.
Working with partners, including the Government, UNFPA supports sexual and reproductive services in Uganda, including through the procurement of family planning supplies through the Global Programme to Enhance Reproductive Health Commodity Security (GPRHCS).
Yet there are persistent barriers to these services, particularly for young people.

At the conference’s youth event, Dr. Osotimehin listened attentively as some 60 young people discussed the challenges they face, including lack of accurate information on sexual and reproductive health, as well as cultural and religious obstacles. 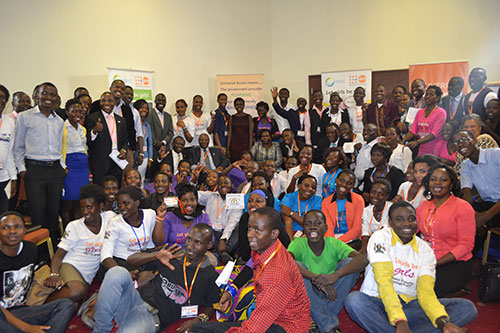 Only 26 per cent of Ugandan women have access to a modern method of contraception, according to the most recent State of the World Population report. And HIV prevalence remains a major concern in Uganda, particularly among young people.

Ms. Kemigisa described how the attitudes of some health workers affected both her and her daughter. “I remembered my baby was supposed to be given syrup, and I asked the nurses, but they would just ignore you… I was not told about how to breastfeed my baby and that mixing breastfeeding and other ways of feeding the baby could lead to HIV infection.”
Dr. Osotimehin said it was important for young people to play a central role in advocating for change. “You are the people who can do it,” he said to the youth present, and to the 9,000 people following their discussion on Facebook and Twitter.
“I really want to appeal to you to make the necessary noise so that you get the services that you need,” he said.

High-level support for family planning was pledged at the conference, including support from Uganda's president.
“Family planning is good for the health of the mother, good for the health of children, and for the welfare of the family,” President Yoweri Museveni stated unequivocally at the conference’s opening.
Sarah Opendi, Uganda’s State Minister for Primary Health Care, also pledged that the government would do more to ensure that youth-friendly reproductive health services are scaled up and made available to more young people.
At the closing of the event, Ms. Opendi noted, “Family planning is no longer an issues of only women. It is an issue of everyone.”

* Ms. Kemigisa has given permission to be identified as HIV positive.