GUIUAN, Eastern Samar, Philippines — When the warnings were issued for Typhoon Haiyan, the chief of the Felipe Abrigo Memorial Hospital wasted no time. Dr. Lilia Daguinod gathered essential medicines from her hospital and set up a small pharmacy in the front room of her small house.

As an obstetrician, Dr. Daguinod knew that women would continue to give birth and be at risk no matter what happened.

In the first days after the typhoon’s ferocious winds shredded this city and left her hospital in ruins, Dr. Daguinod delivered three babies in that room. “Thank God, there were no complications.”

Dr. Lilia Daguinod is caring for pregnant women, post-partum mothers and their babies in the aftermath of Typhoon Haiyan. Photo © William A. Ryan/UNFPA

After a makeshift birthing facility was set up next to a roofless health centre, she continued to host post-partum mothers and their babies in her home.

Four million people were left homeless by Haiyan, known locally as Yolanda, which struck on 8 November. Across the storm’s long and wide path of destruction nearly a month later, 400,000 are living in over 1,000 evacuation centres—in crowded classrooms, churches and offices in damaged towns, and in clusters of tents and crude shacks in seaside villages. Many more are living with neighbours and relatives, or camping next to their ruined homes.

Hundreds of displaced women are giving birth every day, and scores of them face potentially life-threatening complications. Most damaged health centres are now functioning at some level, but staff in many places struggle to serve patients without equipment or electricity and with few ambulances and scarce supplies.

Few of the medical teams that have come to the area are focusing on safe deliveries, and only a handful of facilities can provide emergency surgery.

In response to this crisis, UNFPA, the United Nations Population Fund, is giving priority to ensuring the safety of pregnant women and those who have recently given birth. The Fund is currently sending medical equipment and supplies, including medicines, clean delivery kits and hygiene packs, to government and NGO partners providing health care in the worst affected regions.

UNFPA-organized medical missions started last week to provide prenatal exams and other services to pregnant and breastfeeding women in evacuation centres in Tacloban. Missions in other areas are due to start this week.

Safe delivery supplies were also given right away to the wrecked health centres in the coastal municipalities of Balangkayan and Hernani.

Three weeks after Haiyan, the health centre in Hernani was still without power. Dr. Ezra Valido, the municipal health officer, showed off what was left of the new birthing facility, inaugurated last July, after it was hit by a five-metre storm surge. All of the equipment UNFPA had provided to the provincial government, including tools for sterilizing instruments and testing blood, was ruined.

The centre’s one room that still has a roof became a storeroom for relief supplies—and, on several occasions, a delivery room lit only by flashlights. “We are functioning at less than half our potential,” Dr. Valido stated.

One of Hernani’s two rural health stations is gone. “Only the floor is left.”

“Seventy-five per cent of our patients are at high risk, so they need to deliver at a hospital,” he said. But without phone service or transport, many women are unlikely to get to the centre. “The patients have no money, no one to care for their children, and no one to feed them,” Dr. Valido noted.

He recounted being called, too late, to a woman’s home to attend a breach birth. “I had no gloves, only Betadine solution on my bare hands.” He could not save the baby but the mother survived.

Dr. Valido was concerned about women in settlements along the coast going into labour, especially at night. “They could call for help, but if they can’t find anyone they must fend for themselves,” he said. 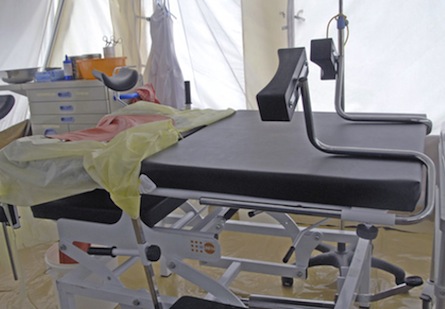 Delivery tables provided by UNFPA to makeshift field hospitals are helping ensure that women can continue to deliver safely. Photo © William A. Ryan/UNFPA

“If they deliver at home without being attended by a health professional, they are at high risk of mortality. They could bleed out. Or they could have big lacerations after delivering the baby, with no one to take care of them or give them medications.”

Batang village in Hernani used to be a paradise of scenic beaches and graceful palms. Nothing is left except the school on a hill, where villagers escaped Yolanda’s merciless tides, falling trees and a hailstorm of coconuts.

Alicia Nicolas, a rural health midwife whose home in Batang was swept away, was worried about her patients and unable to sleep at night. Yet she was doing her best to assist and encourage the pregnant women, whom she said were depressed after losing everything.

The arrival a few days after the storm of hygiene kits provided by UNFPA offered some solace. “The women were joyful to receive some clothes and a towel,” she recalled.

A visitor is struck by the endurance, compassion and heroism of health workers like Dr. Daguinod, Dr. Valido and the many midwives like Alicia who have continued to care for women under harsh conditions since the typhoon, despite being victims themselves.

Birth in the Ruins

Maryann (centre) and her baby boy, after giving birth in a hut with only her husband and mother-in-law to help her. Photo © William A. Ryan/UNFPA

In a mostly flattened village in Mercedes, just north of Guiuan, midwife Norma Dadulla got a knock on the door just before dawn on 23 November. She was taken to a small hut where 20-year-old Maryann Romanca had just given birth to her second baby, a boy, with only her husband and mother-in-law to help her.

“The baby was already out when I got there,” the midwife said. She cut the umbilical cord and cared for the mother.

“Since our health centre was destroyed, I had advised the family to take her to the hospital in Guiuan, but they had no way to get there.”

In normal times, Maryann would have delivered at the rural health centre. Women in labour who can get transport, like Jessica Jaranon, are now being referred to the field hospital run by Médecins Sans Frontières, in front of the ruins of the Felipe Abrigo Memorial Hospital. Medical staff there assisted Jessica, 17, as she gave birth around the same time as Maryann, on the delivery table supplied by UNFPA.

With support from international relief organizations, Dr. Daguinod is working to set up an operating theatre at the site, which will be the only facility in Guiuan that can provide life-saving caesarean sections.

Previously, around 10 per cent of deliveries in the typhoon-affected regions were caesareans, but the capacity to perform emergency surgery is being restored only gradually. In Palo, a devastated city of 65,000 in Leyte province south of Tacloban, there is no facility offering the operation. To fill that gap, UNFPA has procured a maternity hospital in a container, which is now on the way to Palo and due to be set up next week.

That should take some of the pressure off Palo’s still-functioning municipal health centre, where last week two midwives and a nurse helped deliver 27-year-old Mylin’s fourth baby in a tiny exam room.

Enormous hurdles remain in extending maternal health services to Yolanda’s victims, including reaching hard-hit islands and towns away from the main roads.

In Eastern Samar, improvements in medical services and outreach since 2000 have cut the proportion of women who deliver at home in half, to 30 per cent, and reduced maternal deaths even more sharply.

Provincial midwife supervisor Edna Tumandao said she fears this progress could be lost in Yolanda’s aftermath: “We need more help,” she said. “We don’t want to go back to zero.”

— Feature story by William A. Ryan for UNFPA 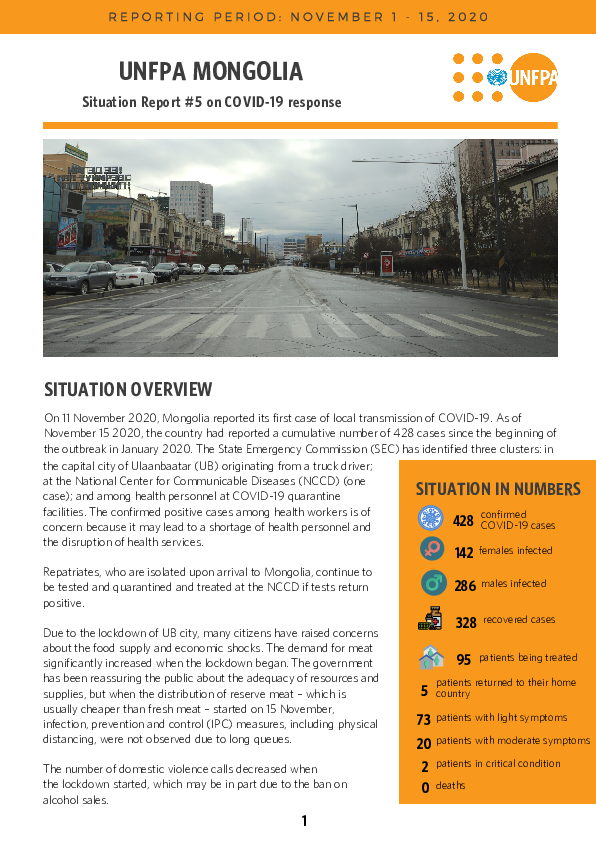