From the Statehouse to the Marketplace: Fighting FGM/C on All Fronts in Nigeria

OSUN STATE, Nigeria — From the shade of a small porch, Chief J.O. Aderibigbe rises to take the floor at this gathering of traditional birth attendants. Resplendent in his pink kaftan, he speaks emphatically in the local language of Yoruba. His colleagues look on, garbed in equally beautiful attire, which belies the poverty of their dusty, impoverished small town in southern Nigeria.

A few years ago, Chief Aderibigbe and other birth attendants were regularly paid to perform a cutting ritual on the genitalia of baby girls in their community. Today we hear through a translator that he agrees with a new state law banning the practice -- and to justify his argument, he has just explained, with appropriate indicative gestures, the heightened risk the procedure creates for obstetric complications. 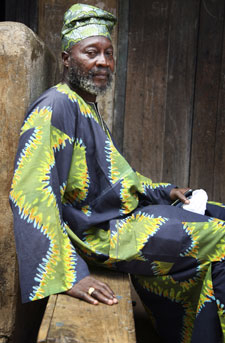 This turn-around, came as part of a widespread multi-year sensitization effort led by UNFPA, the United Nations Population Fund, the Osun State Ministry of Health and several local NGOs to bring about an end to the practice of female genital mutilation/cutting (FGM/C) in Osun State. The term refers to a broad range of traditional practices, all of them encompassing some alteration of a woman or girl’s external genitalia.

In Nigeria, practices range from the partial removal of the clitoris with a knife to the more radical infibulation, the sewing shut of a woman’s vaginal opening. This is usually carried out far from any medical or sanitary setting; the ritual (also known as female circumcision) can cause dangerous bleeding, infection or the development of scar tissue that leads to injury later in life, during childbirth or sexual intercourse. Sometimes complications result in death.

"We go to the rooftops and the marketplace to tell people about this. "

The incidence of FGM/C in Nigeria varies greatly across the country’s huge diversity of ethnic groups, from the Shuwa in the North to the Yoruba in the South. It is at highest among the Yoruba, who make up the majority of Osun State. According to the 2003 Nigerian Demographic and Health Survey, over 60 per cent of Yoruba women in Nigeria have undergone the ritual. Some estimates put the incidence rate in Osun State as high as 90 per cent.

As there was no national law banning the practice, UNFPA and its partners decided to work at the state level. The coalition held a series of meetings, seminars and workshops to discuss the issue, bringing together all aspects of society, from market women to young people to religious leaders. The birth attendants themselves were key participants. Discussions were frank, informative and graphic.

Yet in spite of these efforts, the first round of the campaign was a failure. Elected officials, believing FGM/C to be an important part of their heritage, refused to ban it.

“Tradition dies hard,” says Aduke Obelawo, Chief Social Welfare Officer for Gender and Women Development in the State Ministry of Health. “It took us a long time to sensitize the legislators.” 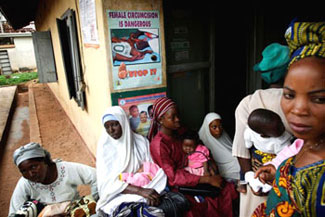 A poster in a primary health clinic calls for an end to FGM/C. Photo: Chris de Bode/Panos/UNFPA

After enough time, more advocacy, and a new round of elections, the campaign’s persistence paid off. In 2004, the State governor signed the Osun State Female Circumcision and Genital Mutilation Prohibition Law, which outlawed the practice throughout Osun State.

Even though the ban is taken quite seriously, actually eradicating a deeply rooted cultural tradition will require additional efforts. FGM/C is still practiced in many of the countries where it has been outlawed. The private nature of the ritual makes it easy to hide from authorities.

Perhaps the most difficult – and critical -- people to convince to follow the law are the practitioners themselves. To the birth attendants, the banning of FGM/C represents more than a change in culture; it is also a dent in their livelihoods. Birth attendants in Osun State are not jobless – they still handle deliveries and male circumcisions – but in a country where the average worker makes only $900 a year, even a small loss of income can be important.

The law’s supporters understand this. “If we don’t provide them with alternative options for employment,” says Mrs. Obelawo, “we are just saying it for saying’s sake.” To this end, the Ministry and UNFPA are offering birth attendants the chance to learn new trades, such as tie-dying or soap-making, to help replace the income they have lost.

Chief Aderibigbe’s group of attendants, however, are being channeled into a more innovative program, one that, as a side benefit, is turning former practitioners into forces for its eradication. They will become Community-Based Delivery agents, or CBDs. 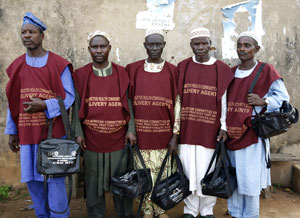 The CBD project trains members of underserved communities in basic reproductive health care. CBDs monitor pregnancies, make sure pregnant women go to health clinics for prenatal care, dispense advice on proper diet and conduct during pregnancy, and sell contraceptives and basic medicines. They serve as a bridge between the people in their communities and health care professionals, providing highly localized services in areas previously hard to reach.

UNFPA and its partners run similar projects in other parts of Nigeria, but the integration of traditional birth attendants into the programme allows a special continuity. These individuals, who have traditionally borne responsibility for pregnant women, are now receiving modern expertise in how best to care for them. Vested in the same authority of tradition they occupied before, they will now be able to offer modern medical advice, putting an end to harmful practices and saving more lives in that area.

“Even before the law, I noticed that during delivery, a woman who has been circumcised was likely to have problems, while one who has not been circumcised will have an easier time,” says Chief Muratu Adebayo Yaloode, a female attendant (in southern Nigeria, both men and women may be birth attendants, while most of those who perform FGM/C are men). “Then, when the UNFPA lectures started, this was confirmed by the information presented.

Chief Yaloode’s colleagues echoed her sentiments. Multiple times, they described learning about the harmful effects of FGM/C at a lecture or workshop. All of them, though former practitioners themselves, now seemed convinced that it ought not to be performed. Most impressive of all, they were willing to work to see that it will not resurface.

“Our situation,” says Chief Bisi Omidusi, vice-chairman of the group of attendants, “is to go to the rooftops and the marketplace, and to tell people about this.”

And the people are likely to listen.