A Song for Cameroon

YAOUNDE, Cameroon — Their plan was to reach many people with a sensitive message – that maternal mortality in Cameroon needs to be tackled. But they knew that cultural barriers generally block these kinds of messages, so they had to find an innovative approach: a music video, "La Femme Enceinte" ("Pregnant Women"), by Cameroonians for Cameroonians.

While doing some research they found a possible solution. Alain Sibenaler, UNFPA Cameroon Representative, explains: "It appears that music and dance are powerful communication tools that can reach the broadest and most varied audience in our country, since they are part of Cameroonian culture."

Could this channel provide a more acceptable vehicle for conveying sensitive messages?

"We started discussing the idea of a song that was strong on messages with one of our partners, the renowned musician and artist Prince Ndedi Eyango, who agreed to lead this project," Sibenaler says. They also wanted to get several famous artists involved and media people from different parts of the country to sing in their native languages and connect with their audiences.

The message would be hard hitting. "The song is basically a call for everyone to unite and act against maternal mortality – an act in which men cannot be left out," says Olive Bonga, UNFPA Cameroon Communications Expert. "We are trying to build an advocacy movement around pregnant women and the underlying issues of maternal mortality in Cameroon."

This includes raising awareness about early pregnancies, the importance of spacing births, the three delays as obstacles to maternal health and the need to get to a health centre to seek qualified care. "With these messages we hope to rally everyone to support women’s basic human rights – such as the right to health and to sexual education," Ms. Bonga says.

Using popular artists in a funky format to reach youth and turn cultural barriers on their heads was both inspired and inspiring. Not surprisingly, the plan was met with enthusiasm.

"Every artist and celebrity contacted accepted without any hesitation," says Prince Ndedi Eyango. "They were proud and excited to join their voices together in honour of women for giving life, and to advocate that none should die or suffer while giving life." Yet the birthing of the song would not be easy.

Getting the artists together was a major challenge because of their busy schedules. It took longer than expected and ultimately it was decided to record only one or two artists each session.

"The recording moments were a lot of fun and were carried out in a family atmosphere – as we can see in the video – despite the seriousness of the messages," Prince Eyango says. One artist, Bebey Manga, battled to make her contribution as she soldiered on. "She kept fainting during her sessions." 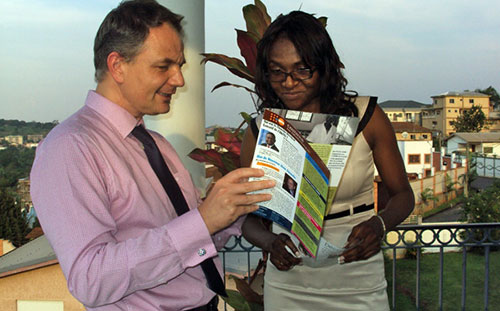 The next challenge was getting the best sound mixing of the song, relying on Prince Eyango’s top-notch sound engineers – plus the use of a record/mixing table in his studio in Douala.

The musical collaboration has won a resounding reception, including responses from officials, who have been impressed by the quality of the song as well as the number of celebrities participating. Cameroon has never had an anthem like this, they say. Sung in two official languages, English and French, as well as other local languages used in the Northern, Littoral and Centre Regions of Cameroon, the message is being heard.

"We want to make special mention of her contribution because she insisted that she wanted to continue, even though she wasn’t well," Prince Eyango says.

So far, the song has been broadcast on BBC’s Focus on Africa, popular youth radio station Magic FM and Ariane TV.

"We are also receiving positive feedback from our Facebook account, where people are congratulating us," Prince Eyango says. "The most beautiful comment we’ve heard is, ‘This song represents all of Cameroon – it speaks to all of us.’" -- LINDSAY BARNES

A Song for Cameroon