UNITED NATIONS, New York — With their tales of love and betrayal, suspense and romance, vengeance and forgiveness, radio and television melodramas captivate wide audiences in every part of the world. In developing countries, positive social messages are increasingly being interwoven into the narratives. The resulting behaviour changes can be as dramatic as the plots themselves:

Ryerson was so impressed with the impact of Twende na Wakati, one of many 'entertainment-education' projects supported by UNFPA, the United Nations Population Fund, that he went on to form Population Media Center (PMC), an organization that works to effect positive social change through broadcast media around the world. UNFPA is now working in partnership with PMC on broadcast projects in Ethiopia, the Philippines and Rwanda, with additional ones under consideration in China and Viet Nam. 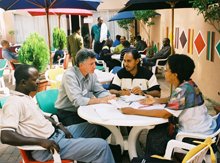 Radio station and NGO personnel from eight African countries took part in a hands-on workshop on developing 'entertainment-education' at a 2003 Johannesburg training funded by UNFPA.

Locally written, the serials dramatize issues and realities specific to various cultural settings. But though the characters themselves and issues they confront vary widely, the process of creating the shows and the story lines follow a carefully researched formula, described in a new publication published by PMC and UNFPA.

A critical element of success is that the shows are, first and foremost, entertaining and intense.

"It is the emotional bonding between the audience and the character that makes the method effective," Ryerson said. Engaging emotions, through sound effects and heightened drama, is a powerful way to influence behaviours, such as those surrounding intimate relationships, that are not necessarily guided by reason. Moreover, the emotion sears the social messages into the memory of listeners, Ryerson added.

The plots unfold gradually. Social content on subjects that may be considered taboo is not even introduced for several months into a show, Ryerson said, and by that time the audience has had a chance to get to know the characters and become gripped by the drama of their lives.

Each story line has a negative character who makes bad choices – and ultimately suffers the consequences.

Mkwaju, a truck driver and sexual adventurer, has encounters with girlfriends all along the major roads of Tanzania. While he squanders his money on alcohol and presents for these women, his subservient wife, Tunu, who cares for their children, grows increasingly frustrated.

When Mkwaju develops AIDS, Tunu, in an act of compassion, cares for him until he dies. But his legacy lives on through his son, Kibuyu, who is beginning to follow in his father's footsteps.

A ‘transitional character’ with whom the target audience is able to identify and empathize, becomes a major focus of interest.

Kibuyu smokes marijuana with his friends and steals money from unsuspecting passers-by. Will he suffer the same fate as his father? Or will he learn from his mother how to succeed in life?

"It’s as if the characters give people permission to have conversations that were previously taboo – and they give them the language with which to do so."

The transitional characters face suffering and doubt. But through positive actions that give them greater control over their lives, they manage to overcome a crisis and enjoy a final change in fortune.

In the conflicting choices faced by these characters, listeners see their own lives unfolding, Ryerson said. They learn vicariously – almost experientially – by seeing positive steps rewarded and bad actions punished. This often leads to a growing sense of self-efficacy – the idea that positive actions will yield results and that destiny relies on more than twists of fate.

Over time, the characters can adopt non-traditional responses – such as open discussions of AIDS or the adoption of family planning – to issues that many in the audience also may be grappling with.

"Because of the bonds that have been forged by this stage, listeners tend to accept these changes, even though they may challenge cultural traditions," Ryerson said. "Since we're dealing with sensitive issues such as sexual relationships and reproduction, it is critical that the programmes do not build opposition or cause a backlash."

Often, as in Twende na Wakati (described above), a major objective is to change the attitudes of men. "It is men who make decisions in many families," said Ryerson. "It is vitally important to get them to recognize the humanity of their wives."

Popular radio series can change not only the way people think about issues, but also the way they talk about them with one another, which amplifies the effectiveness of this medium, Ryerson said. "It’s as if the characters give people permission to have conversations that were previously taboo – and they give them the language with which to do so."

The formula for these melodramas was created and refined by Miguel Sabido when he served as vice- president for research at Televisa, Mexico's major commercial network. Between 1976 and 1985, Sabido produced five serial dramas that are credited as a major factor in the dramatic decline (34 per cent between 1977 and 1986) in the country's population growth rate soon after the programmes aired.

Before the story lines are created, PMC works in collaboration with governments, UNFPA and local organizations to identify key issues as well as barriers and opportunities for social change. In some locales, the challenge may be to clarify misperceptions about condoms or contraceptives; in other places, the emphasis may be on the repercussions of family violence.

In all situations, it is critical that services are in place that allow listeners to take action. A show that aims to encourage family planning, for instance, cannot be successful unless contraceptives are accessible to the audience. UNFPA and its partners often work in parallel with PMC to ensure that available reproductive health services can meet the increase in demand that the shows are likely to spark.