BRAZZAVILLE, Republic of Congo — “The women I see are usually in a critical state. They are destitute and don’t have any means to support themselves,” says Albertine Lelo, a midwife in Dongou, a small town in the Republic of Congo that has welcomed a growing influx of new residents over the last two years.

Since November 2009, when ethnic violence erupted in the neighbouring Democratic Republic of Congo (DRC), tens of thousands of refugees from the DRC have poured across the border. There are now some 120,000 refugees living in the area, outnumbering residents in some villages.

Tension has arisen between refugee and host populations as they compete for limited resources. For refugees, who are primarily women and children, daily survival is a challenge in the face of scarcity, gender-based violence and a lack of health care and other support services. Sexually transmitted infections, maternal mortality and sexual violence are grim and all too common realities for women here.

Since the beginning of the crisis in 2009, UNFPA has offered much-needed maternal, sexual and reproductive health services to refugees, including HIV prevention initiatives and psychosocial assistance for survivors of sexual violence. In April 2011 alone, for example, UNFPA provided 4.6 tons of emergency reproductive health kits – containing sanitary pads, cloths, condoms, soap, gloves and other supplies – to clinics in the region.

UNFPA has worked closely with local authorities and health providers to help prevent maternal mortality. One important initiative has been the training and deployment of midwives in health centres in the area. Indeed, when midwives are properly empowered in a community, they can offer the most cost-effective path to wide access to maternal health care.

Encouragingly, UNFPA has seen a notable reduction in sexual violence and a significant increase in the number of women seeking maternal and reproductive health care. The percentage of women accessing antenatal care has increased from 20 percent at the start of the crisis to 70 percent – which is higher than the national average.

UNFPA and other humanitarian actors face multiple logistical challenges to providing humanitarian aid in the region. Getting supplies and services to the refugee population has proved to be particularly difficult as the refugees are spaced out along 600 kilometres of the Oubangui River and only accessible by waterways. For much of the year, the river is barely navigable; during the dry season, the river dries up, while during the wet season, heavy rainfall often hinders travel. 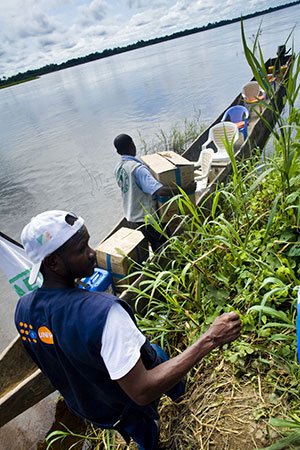 Getting assistance to the refugees involves many logistical challenges. Photo: Nicolas Guyot

From the Republic of Congo’s capital, Brazzaville, stocks must be sent by plane to Impfondo, the only functional airport in the area. From Impfondo, UNFPA and other aid organizations often depend on alternative transportation routes through neighbouring Central African Republic to carry heavy stocks.

As a result, this humanitarian intervention is extremely expensive. In 2010 alone, the United Nations system called for $59 million in emergency funds to serve the Republic of Congo’s refugee population. While the need for aid persists, sustaining this level of funding is a challenge.

“We have noted incredible progress in terms of maternal health among local and refugee populations,” explains David Lawson, UNFPA Representative in the Republic of Congo. “But UNFPA only has funds to provide aid to the refugees until July 2011.”

According to data collected by UNFPA among women using health centres in the area, there is a worrying progression of syphilis and HIV among local and refugee populations. Roughly 11 per cent of the population has syphilis and 13 per cent are living with HIV – rates that underscore the critical need for continued sexual and reproductive health services.

An uncertain future for humanitarian assistance

Last April, UNHCR announced that the return of refugees to the DRC would be postponed given the volatile security situation in the DRC. With this postponement, it is uncertain whether UNFPA has the financial capacity to continue providing aid to refugees in the region.

The vast of majority of refugees want to return home once the security situation allows it. In the meantime, UNFPA hopes that the international community will continue to support UN humanitarian efforts to serve these vulnerable populations in the Republic of Congo.