DUHOK, Iraq – "The clinic is always crowded," said Lava Abdul Rahman, a gynaecologist at the UNFPA maternity clinic in Domiz, a refugee camp in northern Iraq.

Each day, between 30 and 35 pregnant women come to the clinic for antenatal care, she noted.

More than three years into the Syrian crisis – a catastrophe that has forced hundreds of thousands to flee to Iraq, including more than 3,800 pregnant women – refugee camps have become simply a fact of life for many.

“I am in the ninth month of pregnancy” 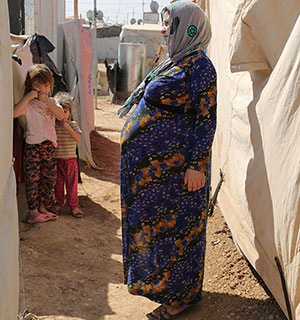 In the Domiz Camp, in the Duhok Governorate of Iraq, the sea of temporary shelters is slowly transforming into a city. Concrete houses are replacing tents and prefabricated caravans. Shops have sprouted up everywhere.

Syrians there say they have not, and will not, lose hope that peace can be restored in their home country. But for now, life in the camp has settled into a rhythm. Weddings are held every other day, and scattered cries of newborns can be heard as one walks through the camp.

"Despite the hardships and difficulties in making a living, other aspects of life go on normally," said Ruqaya, 36, as she left the UNFPA maternity clinic.

When she and her four children fled their home in Qamishli, Syria, she could not imagine having another baby. But "life goes on," she said. “I am in the ninth month of pregnancy now."

Ruqaya was not alone. The clinic was crowded with other pregnant women.

The UNFPA clinic here was established when the Domiz Camp was set up in 2012. Since then, more than 60,000 Syrians have arrived.

But until recently, deliveries had to be conducted in hospitals outside the camp. Getting there was timely and required money for transportation.

The clinic now has had the capacity to safely perform deliveries. Between 4 August and 20 September, some 200 deliveries took place there.

“Most of pregnant women want to deliver here if they do not have any pregnancy complications or need a C-section,” Dr. Rahman said. When complications arise, mothers are referred to hospitals, she added.

"We only conduct normal deliveries here," she said.

Having a maternity clinic in the camp is a relief, said Natja, a 25-year-old refugee.

"My daughter is two-and-a-half years old now,” she told UNFPA. “My husband wanted another baby last year, but I was resistant to the idea due to being in refuge, and I was afraid I would not receive good healthcare.”

But after speaking to other women who had become pregnant while living in the camp, she felt assured she would receive proper care from the maternity clinic.

She is now four months pregnant.

Wael Hatahet, UNFPA’s humanitarian coordinator in Iraq, said UNFPA provides the clinic with medics, equipment and reproductive health kits. The cost of Caesarean sections performed in referral hospitals is also covered by UNFPA, which also supports a number of maternity hospitals in the Governorate.