Risking Death to Give Life in Panama's Tropical Forests

Infant and maternal mortality for indigenous groups tends to be far higher than in the general population of their countries. Deeply rooted cultural traditions and belief systems – as well as physical and social isolation – may complicate the delivery of quality obstetric and neonatal care. In many countries throughout Latin America (see below), UNFPA is working to improve reproductive health and make motherhood safer.

CHIRIQUÍ PROVINCE, Panama — Giving birth to her twelfth child in her family’s straw hut in the remote mountains of Western Panama, hours away from medical services, turned deadly for Cristobalina Santos. Her husband, Severino Caballero, recalls how contractions started at about seven o’clock one evening. After Cristobalina had given birth to a healthy baby, she developed an aggressive infection. By three the next morning, she was dead. She was 36 years old.

“I tried to get together enough people to carry her to the clinic, but there was no one around,” her husband said. “After she died, I felt sad for a long time. I could not work. The children suffered too. We survived on handouts from the church.”

Cristobalina’s death happened several years ago, but the scenario is a familiar one for members of the Ngöbe tribe, an indigenous group living in the Chiriquí Province, near the border with Costa Rica. They live in a scarcely populated region. Walking on steep trails across ravines, cutting through clusters of banana trees, coffee plants and other tropical vegetation is the only way to reach the nearest town or village for most of them. 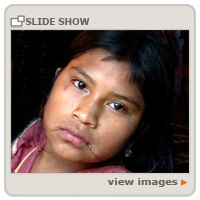 The Ngöbe are among the poorest of Latin America’s people. The picture-perfect beauty of their straw huts nestled in Panama’s exuberantly green Cordillera Central [central mountain range], with its stunning views of the Pacific Ocean, belies a rugged lifestyle where easily treatable conditions, such as complications during childbirth, can quickly become life-threatening.

But a lack of transportation is not the only issue. Some indigenous people view modern health services with suspicion and swear by traditional medicine and giving birth at home, even when a clinic is within reach.

Salina Sanchez is a 33-year-old mother of seven who is nine months pregnant. She lives about a 30-minute walk from a clinic in Hato Chamí, but says she prefers to give birth at home, with the help of her husband and a sister-in-law. “Giving birth has always been quick for me, so I prefer to do it at home.”

On the other side of the spectrum is Domitila Rodriguez, a 27-year-old mother of six. She has to walk for an hour and a half from her house in Boca del Monte to get a check-up at the clinic. She has never given birth at home. “It scares me,” she said. “I’m afraid I could die.”

The maternal mortality rate for Panama is a moderate 70 deaths per 100,000 live births (ranking among the ten best in Latin America and the Caribbean), but in some of the mainly indigenous areas, the death rate skyrockets to 658, higher than the average rate for Haiti, which holds the dubious distinction of having the highest maternal mortality rate in the Western Hemisphere, at 520 deaths per 100,000 live births.

High maternal mortality rates usually indicate high levels of poverty, marginalization and inequality. An estimated 98 per cent of the indigenous population in Panama lives in extreme poverty, defined as living on less than $2 per day. Panama, like most countries in Latin America, is a land of contrasts and inequities. 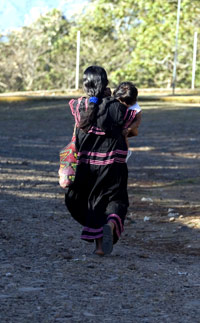 Social and economic indicators place the country among a group of relatively wealthy middle-income countries, but figures for the indigenous population alone reveal a stark contrast between rich and poor. On average 92.5 per cent of births in Panama were attended by skilled medical personnel. In indigenous areas only 57.4 per cent of births received medical attention.

“We classify all pregnancies here as high risk, because of the extreme poverty,” said Dr. Yaiset Joseph, a general practitioner at the small clinic in Hato Chamí, in the heart of the Ngöbe community.

She normally attends 30-40 patients a day, but sometimes as many as 80. She lists the lack of spacing between births, as well as the high birth rate among Ngöbe women, among the factors that put them at risk.

"Most women here give birth to nine or more children,” she said. “In cases when a woman is giving birth to her ninth or tenth child, we refer her to the hospital in order to avoid complications.”

Few Ngöbe women are open to using birth control methods, either for religious reasons, or because they fear their husband will leave them if they do.

Cultural norms come into play as well: Indigenous women are used to giving birth standing up, or squatting, not lying down, a practice that is uncommon in hospitals and for which most medical staff have not been trained.

As part of an overall strategy to fight extreme poverty, UNFPA and the International Fund for Agricultural Development (IFAD), in cooperation with the Panamanian government will invest $800,000 over the next four years to improve maternal health services among the Ngöbe and Buglé populations, the two predominant indigenous groups in Western Panama.

UNFPA is coordinating efforts among the Government, ASMUNG, IFAD and the private sector. “We are also providing equipment and family planning commodities for rural clinics, as well as training of health personnel,” said Laura Flores, UNFPA’s Assistant Representative in Panama. The organization hopes to raise additional funds from coffee growers and other private sector sources to further improve maternal health services in indigenous communities.