Katibula, Mchinji District, Malawi - In this village at the centre of Southern Africa's "perfect storm", where hunger, poverty and AIDS reinforce each other like elements of a gathering hurricane, the women are singing.

In strong voices and flawless harmony, they sing a powerful hymn about the famine that struck early this year, when villagers ate bitter roots and children died. Their song to a group of foreign visitors is both a memorial to their suffering and a plea: do not abandon us. 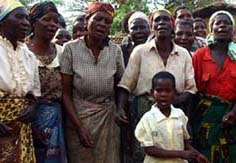 Malawi villagers sing about the famine that struck in early 2002.

With granaries empty and the next harvest months away, the people of Malawi and neighbouring countries are depending on outside help to prevent an even more calamitous season of misery. The World Food Programme is steadily increasing its assistance, gearing up to feed some 3.2 million Malawians-one third of the population-by January 2003, when the food emergency is expected to peak.

Others are focusing on other life-and-death aspects of the complex crisis. The United Nations Population Fund (UNFPA) is working to prevent any worsening of Malawi's already sky-high maternal mortality rate, and to slow the ongoing advance of HIV/AIDS, especially among young people. These reproductive health issues must be addressed as an integral part of the humanitarian response to Southern Africa's emergency, the Fund warns.

"The food crisis is hitting a population already bending at the knees under the impact of HIV/AIDS," notes UNFPA Representative Dr. Charlotte Gardiner. The epidemic has undermined family support systems and is killing many of the country's most-needed workers, including health professionals and experienced farmers.

Pregnant women are especially at risk in the current crisis. "We can expect so see an increasing number of obstetric complications related to anaemia," Dr. Gardiner says. "Malnourished mothers are more likely to be anaemic and therefore at risk of bleeding, particularly after delivery. They suffer higher mortality in childbirth, and are more susceptible to infections. We need to strengthen the health system response to this."

Maternal deaths have already risen sharply in the past year, due both to widespread hunger and to a related cholera epidemic. Nearly half of all Malawian women give birth outside a health facility and without access to emergency care.

And as the crisis continues, Dr. Gardiner cautions, the need to search for food will prevent many more women from seeking antenatal care and giving birth at a hospital or health centre, and will disrupt efforts to promote these services.

In these extraordinary circumstances, UNFPA's regular programme in Malawi has taken on an added importance. With aid from the Canadian Public Health Association (CPHA), the Fund is supporting community-based reproductive health activities in three poor districts. It provides supplies and training for health workers and volunteers, and promotes public awareness activities aimed at improving health-related behaviour.

In addition, the United Nations has asked the international community for $400,000 to strengthen reproductive health efforts in Malawi, as part of its $144 million consolidated appeal to address the humanitarian crisis. Under the multisectoral plan, UNFPA would train health service providers to better respond to hunger-related problems, and procure and distribute iron tablets and safe delivery kits for pregnant women.

"Anaemia is also linked to women's HIV status," Dr. Gardiner points out. "So we also need to build voluntary counselling and testing into the humanitarian response."

To ensure that sexual exploitation and abuse do not occur during the relief effort, UNFPA is also chairing an interagency group that will work to raise local awareness of this potential problem, train humanitarian workers, disseminate guidelines developed after reported incidents last year in West Africa, and monitor the situation. "The food distribution system needs to be set up to minimize the potential for exploitation," says Dr. Gardiner.

In the maternal and child health unit at Malawi's Mchinji District Hospital, hundreds of mothers sit on the floor holding their small children; many are nursing. They have come on foot from surrounding villages to await rations of maize fortified with soy, under a donor-supported supplementary feeding programme. Each will take home five litres of mixed flour to feed her family for two weeks. 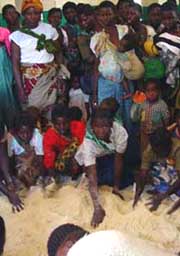 Volunteers mix the maize and soy flour on the floor and add cooking oil. Others help to manage the food distribution. One is Irini Banda, 25; she serves on her village's health committee, which identifies those most in need. She is helping, she says, "because we have seen so much hunger, and because I too am a mother" (of five).

In other rooms in the unit, women await prenatal exams or family planning counselling, infants are weighed, mothers attend children recovering from severe malnutrition, and maternity patients wait to undergo caesarean delivery or recover from childbirth.

The hospital is not too crowded now, but the District Health Officer in charge, Dr. H.Y. Njikho, says that will change in a few months when the wet season arrives and the country's food crisis worsens. "Last year we were full everywhere," he says. "We had 60 malnourished children, compared to 12 now. The labour room has only three beds; some women were on the floor. Many people came to us seeking food."

Dr. Njikho says the outpatient clinic currently has adequate contraceptive supplies and condoms provided by UNFPA, but the hospital is short of rubber gloves and has no HIV test kits.

A visit to the nearby Nkhwazi health centre also reveals sufficient supplies of injectable and oral contraceptives and condoms but not enough rubber gloves. The facility, which serves more than 100 villages, has no electricity or running water. Inside, a mother is resting with her baby, born a short time earlier. The health assistant on duty says the centre averages about one birth a day, but sometimes has up to three patients in labour at a time. Many women are brought in after experiencing delivery complications at home.

The UNFPA-CPHA project provides supplies and training for staff at the Mchinji hospital and health centres in the district. It also supports the grassroots-level activities of the community-based contraceptive distributors and village health committees.

In the village of Katibula, about five kilometres from the health centre and the nearest paved road, members of the village health committee talk with a group of international visitors about their work and the country's hardship. The 20-member committee is evenly divided between men and women and includes traditional leaders, including the village chief and the female chief, as well as youth representatives.

The committee is responsible for educating villagers about health issues including safe motherhood, family planning, prevention of sexually transmitted infections including HIV, and sanitation. Members encourage pregnant women to seek prenatal care and to go to a hospital to give birth or use a traditional birth attendant. They also teach about the harmful effects of discrimination against women and girls, and urge men to do their share of domestic work. Nearly everyone, it seems, knows the English word "gender", as well as "food security".

When asked about the famine earlier this year, the hosts show their guests the roots they were forced to eat along with whatever wild fruit they could find when there was no more maize. These roots are not only bitter; if not boiled for many hours, eating them can be fatal. A number of villagers died from eating roots that were not cooked long enough.

To counter the HIV/AIDS epidemic that has already taken a heavy toll, the health committee is promoting changes in cultural practices that contribute to the spread of the disease, including polygamy, widow inheritance and sexual initiation rites for girls. Condom use is still a sensitive issue-when the question comes up, the women do not want to answer in front of the men-but the chief says that people now see condoms as critical to preventing AIDS.

At a public meeting organized by the village health committee, residents of three villages gather to hear young people perform songs and dramas with messages about public health issues such as hunger, HIV/AIDS and family planning.

In one skit, a ragged husband tells his wife he is hungry. 'I've always asked you to use family planning," she says. "Now we have too many children to feed." The man hits the wife and tries to take all the family's food for himself. Another couple, better dressed, has practised family planning and has enough food for their two children. Other performances link social problems like infidelity and drug use to HIV/AIDS and the famine.

Katibula is the home of distribution agent Mark Konala, 36, who volunteers two days a week, serving 10 villages by bicycle. He gives out condoms and pills, along with information about preventing unwanted pregnancies and sexually transmitted infections including HIV. UNFPA provides his supplies, and supported his initial three-week training and a week of refresher training every six months.

As Mr. Konala meets with the international visitors in his small hut, curious villagers gather outside. When the guests emerge, the older women spontaneously burst into a song about their recent calamity.