DAMASCUS, Syria – Despite the limited transportation, perpetual security threats and bombings ravaging her adopted city, Leen Darwish, an optimistic 23-year-old woman, stayed steadfastly determined to continue her education at the University of Damascus and graduate with a degree in computer science.

And later this year, four years after the conflict raging across the country forced her to leave behind her life in her home town of Harasta, Leen will achieve her goal and claim her diploma. She is also hard at work launching her new app and web-based platform, called Remmaz, designed to teach coding throughout Syria – and eventually the Arab world, started through support from the UNFPA Innovation Fund.

“To continue my education was a priority for me, and this new opportunity to develop online courses is the first step for me to achieve my dreams,” she says, her sharply intelligent eyes twinkling with enthusiasm. “It is the best way to teach my fellow Arab youth about the new opportunities in the software coding business that they could all tap into.”

Her innovation is one of the first such platforms of its kind in the region. And Leen launched the endeavour after attending a three-week, UNFPA-supported training in Damascus on how to start and manage small businesses, along with 28 other techy-savvy young Syrians, ages 22-30, from multiple ethic groups and regions, who were also displaced by the conflict. Today, just six months after the training concluded at the end of December, nine of their new businesses are already fully up and running.

“This programme is providing young people in Syria with critical business, leadership and entrepreneurship skills and directly linking them to opportunities to generate income,” says Bruce Campbell, UNFPA Global Coordinator for the Data for Development Platform. “We are already seeing the impact of the programme, and we hope these businesses will continue to grow and thrive, supporting these young people and their communities.” 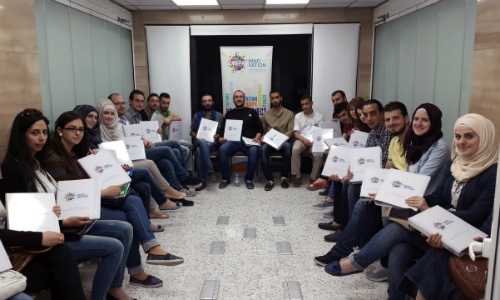 The impact of conflict on Syria’s young people

The brutal five-year-old conflict in Syria has produced 5 million refugees and internally displaced an additional 13.5 million residents – for a total of 18.5 million people forced from their homes, in a country that, before the conflict began, had a population of 23 million. And across the war-torn nation, numerous systems and critical infrastructures are barely hanging on.

The education system is among those casualties. Thousands of schools have been destroyed or turned into shelters for displaced families, an estimated 50,000 teachers are out of work and enrolment in primary and secondary education has dropped by 44 per cent since before the conflict, causing an estimated economic loss of US$10.67 billion – equivalent to nearly 18 per cent of the national GDP.

Educating youth and providing them with the skills to succeed in a modern economy is essential for development, growth and rebuilding the communities and economies destroyed by conflict. Empowering young women to stay in school and find employment is particularly critical, not only to maximize economic growth, but also to reduce instances of child marriage, gender-based violence and adolescent pregnancy – the rates of which are all reported to be rising amidst the conflict in Syria.

Innovating towards a better future 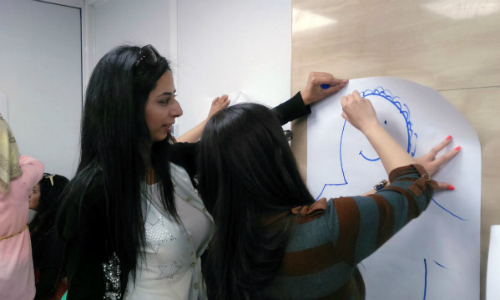 The class of 28 was selected from an applicant pull of nearly 200, and today, just six months after the training, nine of their new businesses are already fully up and running.  © UNFPA Syria

UNFPA’s Innovation Fund, which is supported by the government of Denmark, is dedicated to empowering the world’s 1.8 billion young people to use innovative technologies and approaches to improve their countries’ economies and health outcomes.

In Syria, 20 young women and 8 young men were selected from a pool of nearly 200 applicants to participate in December's three-week training, organized by UNFPA and seven local partner organizations. The aim was for them to develop plans for their own, largely technology-based small businesses and learn the skills to make them succeed, and also, to help the diverse group of young people grow accustomed to working with individuals from ethnic groups and backgrounds different from their own – helping build not only prosperity, but also the basis for lasting peace.

At the end of the course, the participants presented 23 projects to a panel of experts, 17 of which, including Leen’s, were chosen for further development. And this spring, the programme held additional entrepreneurship boot camps in the cities of Homs and Tartous.

“At UNFPA we believe that innovation is a critical tool to address bottlenecks in programming and deliver meaningful results in people’s lives. This is perhaps no better illustrated than in the programme in Syria, where innovative approaches are being used to support young people severely affected by the ongoing crisis,” says Campbell. “And once we’ve documented the lessons learned in Syria, we are excited to see where else this innovative model might be applied.”

Back in Damascus, Leen has similar ambitions for scale-up. “Remmaz is a small beginning for now, but we’re working to make it an effective resource for large-scale learning that gives every Arab person the chance of learning cutting-edge technologies.”

Announcing the Winners of the Joint Innovation Challenge 2022

Equalizing Opportunities for Women and Girls Through Innovation