TECUN UMAN, Guatemala — Only the most destitute stop by the House of Migrants in Tecun Uman, a squalid town in northern Guatemala on the Mexican border. They come in small groups, or alone, many with stories of unimaginable hardships, as well as a resolute determination to continue the journey north to the United States, no matter what happens.

At the house, which is run by the Scalabrini order of the Catholic Church, the migrants get up to three nights of free accommodation, food, some advice for the road, and a chance to shower and wash their clothes. 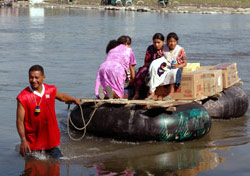 For some, it is the first attempt to travel north. Others have already been caught by Mexican migration authorities and are getting ready to make their second attempt…or third…or fourth.

Sandra Lloro, a 20 year-old Honduran and a mother of three, had made it more than half-way across Mexico when she got caught by Mexican immigration authorities and sent back to Guatemala. Then she got robbed near the border. “They took my papers and all my money,” she said. After sitting through a talk at the House of Migrants, she is again planning to head north across the border—on foot and penniless.

“My youngest daughter got a severe burn on her hand and needs an operation. This is why I decided to go to the United States and search for a job,” she explains. She hopes to walk from the Mexico-Guatemala border to Arriaga, a town in the southernmost Mexican state of Chiapas and the closest point where she can hitch a ride on a freight train heading north. “I am so afraid,” she says. Many potential dangers await her and other Central American migrants on the way north. Some get mugged on the way to catch the train. Others get caught by migration authorities. And then there is the danger of getting hurt while attempting to board the freight train.

When asked if it wouldn’t make more sense to turn around and go back home to Honduras, she shakes her head, looks down and says, “No, I can’t,” in a way that leaves no doubt about her resolve.

Mario Morales, a social worker at the House of Migrants gives a talk every day to groups of hopeful migrants who pass through its doors. He proposes for safety that they take turns sleeping while traveling on the roof of the train. “Have your buddy sit nearby while you sleep for four hours, making sure you don’t fall off. Then trade places so that he or she can sleep for four hours,” he says.

"This is the forgotten border. Women die here and nobody ever finds out."

Morales also instructs the group in how to avoid getting infected with HIV and other sexually transmitted infections. This education forms part of a regional effort supported by UNFPA, the United Nations Population Fund, and the OPEC Fund for International Development. The activities target vulnerable youth in Belize, Costa Rica, Guatemala, Guyana, Honduras, and St. Lucia. In Guatemala, UNFPA and its local partner organization, Educavida, help educate sex workers, students, men who have sex with men, and migrants in HIV prevention. The organization also provides or facilitates HIV testing, counselling, condom distribution, and prenatal care.

Some of the aid pays for meals for the migrants. “You can’t talk to a hungry migrant about AIDS. Give him some food first,” says Father Ademar Barilli, who manages the House of Migrants.

He adds that the migrants are generally not infected with HIV when they are travelling north, “Nor do they come here to rob and steal. They generally stay for a very brief period.” He warns that the human rights of migrants are often violated. “In the United States, immigrants have organizations to help protect their rights, but nobody cares about them while they are on the road,” he says.

Gerardo Valladares is another Honduran among those gathered at the House of Migrants. Sitting in the shade in the stifling midday heat, he tells his story of repeated hardships, accidents and economic failure.

When hurricane Mitch swept across Honduras in 1998, he lost his wife. “I had to take the two oldest children out of school and the two youngest ones never started school at all, because I couldn’t afford it,” he said. Soon thereafter, he lost his job as a grain vendor, then he lost his house, and, as if this was not enough hardship, he was hit by a car, which broke his right leg in three places and the left one in one place. He uses a crutch in order to walk. “I feel it in my heart that I don’t have it in me to get there [to the United States],” he says. “Why don’t they help us, so that we can stay in our own country?” he asks to no one in particular.

Maria Ester Rosales, Deputy Director of the House of Migrants in Tapachula, on the Mexican side of the border, says there is a seemingly endless stream of young and middle-aged migrants, many with stories like this—“one more heartbreaking than the other.” 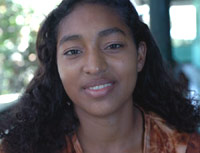 Sandra Lorro plans to risk another trip north in search of a job. Photo: Trygve Olfarnes

She also talks about a sinister trend of young migrant women disappearing on their way north. “There is no registry of disappeared persons. Where do we turn? Who do we tell?” she asks. “This is the forgotten border. Women die here and nobody ever finds out.”

The San Marcos district where Tecun Uman is located has a population of only about 27,000 people, but that number doubles when the transient population is included.

Marleny Lopez, an educator with Educavida, maintains regular contact with up to 100 sex workers in the area. In all, nearly 600 of them have been trained in how to prevent infection. “But it is a fluctuating population, so it is hard to know how many work in the area at any given time,” she says.

Marleny makes regular rounds of bars in Tecun Uman and its outskirts. In one of them, she meets ‘Lupita’, a 16-year-old indigenous girl from a mountainous area near San Marcos. She combines going to school in the morning with seeing clients in the bar at night. Her room in a building behind the bar is dimly lit with a greenish light. “My family doesn’t know what I do for a living,” she says. Her father died three months ago, and she sends money to her mother to help out with living expenses.

‘María’, a 22-year-old from Matitlan, Guatemala is another of the sex workers who service the local and transient population. She says she came to Tecun Uman “out of necessity.” After three years of marriage, her husband started hitting her, and she could no longer live with him.

She visits a local clinic regularly to get check-ups and a supply of condoms. “My clients use them,” she says, “but some break them on purpose.”