Nova Iguaçu, Brazil —Joao (30) recalls the feverish evening not too long ago when he had a harrowing fight with the mother of his children. His version of the story is that in the midst of a heated fight, he pulled out a knife and tried to kill himself in desperation. “Look, I have the scar to prove it,” he said, pointing to his chest. Dazed and in pain, he fled the couple’s home. He says he was hit by a car as he rushed into the street. That's not how the woman recalled it.

What really happened that balmy evening is uncertain. But shortly afterwards, his girlfriend reported him to the police for rape and threats he had allegedly made against her. A couple of days later he received a message asking him to report to the police station.

Joao (not his real name) did not end up in jail for the incident, but he does attend mandatory group therapy sessions at SerH, the Educational Service for Men who have Committed Gender-based Violence. And he says he has changed as a result: “I feel more comfortable talking, exposing problems to others. I am also more open with my new partner and she with me. I used to repress everything,” he said. 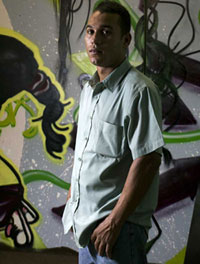 Therapy sessions encourage men to reflect on and talk about their feeling and behaviour. Photo: Eduardo Martino

A new and tougher stand on domestic violence

Gender-based violence has been taken seriously in Brazil since President Luiz Inazio Lula da Silva signed a law in August 2006, dubbed the ‘Maria da Penha law’. The law is named after a woman who was continuously beaten by her husband for many years in the early 1980s. The law changed the penal code, allowing an aggressor to be arrested not only for the act of committing an offence, but also preventively, if the aggressor’s freedom is determined to be a threat to a victim’s life. The law also provides for gender-based crimes against women to be judged in special courts.

The usual outcome of a trial involving gender-based violence is a 3-4 month-long suspended jail sentence along with mandatory attendance of 20 group therapy sessions at SerH.

“Our main concern is to prevent violence, not to punish perpetrators,” said Mariana Segadas, a public prosecutor in Nova Iguacu. This is precisely what the new rehabilitation centre aims to do: Help perpetrators of gender-based violence open up, reflect on their behavior and substitute violence with constructive communication.

Joao came here as a result of the incident and the report made by his former girlfriend. So far, he has come to five meetings and has 15 more to go. The average age of group participants is 35, but the range is between late 20s and about 60.

The centre—the first of its kind to form part of public policy in Brazil—was officially inaugurated on March 30 with the participation of the Brazilian Minister of the Special Secretariat for Policies for Women, Nilcea Freire, UNAIDS Executive Director Michel Sidbe, UNIFEM Executive Director Ines Alberdi and UNFPA Deputy Executive Director Purnima Mane. 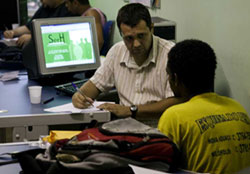 “This project addresses the root causes of why violence occurs and promotes a culture of zero tolerance of violence,” said Mane at the inauguration ceremony.

The centre has actually been operating since last October. So far, 150 men have participated. The required duration is 20 group sessions over five months—one session per week. Two facilitators work with each group. They are social workers, psychologists and social scientists.

The men agree to stick to 15-20 commitments while they are in the group. Among them to respect each other, listen to each other, respect each other’s opinions and tell the group openly about their experience with violence. The group decides the topic for discussion. Recurring topics are violence, religion, sex, the difference between women and men, and paternity.

“At first, participants are suspicious and feel like they have been treated unfairly, then they start to enjoy talking. In time and with reflection, they are ready to take responsibility for their actions,” said Roberto Amado, a SerH project coordinator. It is quite common that perpetrators do not initially admit any guilt. “The important thing is that they start reflecting on their behaviour,” he said.

Part of a broader effort

The law is not limited to making penalties more severe. It also establishes social measures to assist women. For example, those at risk may be included in government welfare programmes, and the law provides for the inclusion of basic information on violence against women in school curriculums. 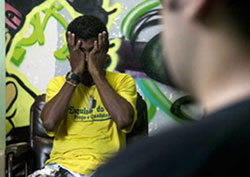 Getting men to acknowledge the harm they have caused is an important step forward. Photo: Eduardo Martino

In a related effort, Brazil has established a number of special police stations serving women who have become victims of gender-based violence. These police stations are manned by personnel especially trained in how to receive and process reports of these crimes. They also maintain a database on aggressors, which is shared throughout Brazil’s law enforcement system.

Critics claim that the program may give offenders an easy way out of a jail sentence, and that it does not have the intended preventive effect.

Gary Barker, a Senior Technical Adviser at the International Centre for Research on Women in Washington D.C. who was involved in the creation of the programme said there is evidence that group counselling programmes can work well. “They work better as part of a sentence and when compliance is reported back to the judge,” he said. He also suggests that the group counselling may have a stronger impact if accompanied by individual therapy. The number of group sessions in the programme is also an issue for debate, “some argue that there should be no limit on the number of sessions to be attended, but this is clearly a question of resources,” Barker said.

UNFPA /Brazil is supporting national efforts to include men as part of the solution to end gender-based violence, including a campaign launched by the Special Secretariat on Women's Affairs to mobilize men across the country in response to the UN Secretary-General’s campaign to end violence against women—UNITE. UNFPA also supports other Brazilian initiatives to end gender-based violence, including the establishment of a series of special police stations geared towards the needs of women.

“The rehabilitation centre will be another great story that Brazil has to tell the world,” said Mane.