JUBA, South Sudan — "Walk like a midwife," the students of a UNFPA-supported community midwifery programme in Kaji Keji tell each other. "A midwife walks fast on her way to save lives!"

For midwives in the Republic of South Sudan, this is not simply an expression. With just 100 midwives and fewer than 500 doctors to cover a population of 8.3 million people, midwives must cover long distances to reach women with life-saving care. 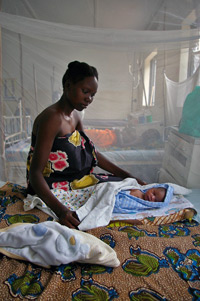 Mother with child under a mosquito net to guard against malaria. Photo: Roza Freriks

As South Sudan approaches its official declaration of independence on the 9th of July, midwifery students recognize that they will play a crucial – and challenging – role in helping their infant country get off its feet.

"Mothers suffer during delivery," explains Linda, a student at the UNFPA-supported community midwifery programme in Maridi in South Sudan. "Very many have died – friends, relatives. If complications arise during delivery, the people in the community don't know what to do. They simply leave the person to die."

At present, South Sudan is the most dangerous place on earth to give birth. One out of seven mothers eventually dies from complications related to one of her many pregnancies. Because early marriage is common and contraceptive prevalence is only 3.5 per cent, girls start giving birth in their teens and average more than seven children each. Unsurprisingly, Africa's newest nation has the highest maternal mortality rate in the world -- 2,054 women die for every 100,000 live births. Often their infants die as well, either in childbirth or for lack of proper mothering.

Many of the midwifery students enrolled in the UNFPA-supported program tell of witnessing women dying during delivery in their communities – experiences that motivated them to act.

"We are the ones who will go and change things," one midwifery student in Maridi says. For over ten years she lived in Congo, but now that the war is over she is back in South Sudan and determined to improve the lives of mothers here. "We are the ones to ensure that mothers will deliver in the hospital by explaining the disadvantages of delivering at home."

While excited at the prospect of a helping to shape a new nation, midwifery students also acknowledge the challenges that lie ahead. "South Sudan is like a newborn baby," Helen Amal, a diploma midwifery student from the UNFPA-supported Juba College of Nursing and midwifery explains. "To grow and learn to stand on its own, it needs support." 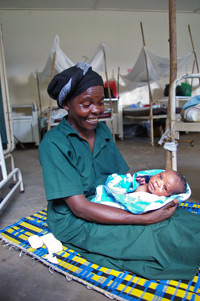 UNFPA is working with South Sudan's Ministry of Health to improve skilled attendance at birth by training midwives and assisting the new government to set up basic health systems. In addition to supporting midwifery training programmes in Kajo Keji, Maridi, and Juba, UNFPA has so far deployed 15 International UN Volunteer midwives from all over the world to locations throughout South Sudan's 10 states. Working at the primary health care level and within local communities, these volunteer midwives are providing culturally sensitive midwifery care, counselling and support.

In spite of the difficulties that their young country faces – a history of bitter conflict, widespread poverty, and a scarcity of roads and other infrastructure – the current crop of midwifery students is largely optimistic about the changes that independence will bring.

"Sometimes we fear what may happen after Independence when there are two nations," adds fellow student Grace Konga Zakaria. "But the most important thing is that we are free."

And then they hurry off, walking fast, to serve their newborn country.