UNITED NATIONS, New York—A pioneering initiative in Brazil is showing that the country’s youth bulge is an economic force that could expand production and opportunities as well as promote the elimination of poverty, according to a just-issued study on the initiative, the National Youth Inclusion Programme, ProJovem. Released today, the study says that the initiative could be replicated in developing countries with similar demographic structures.

With lower birth and death rates, Brazil has been experiencing a demographic transition in which the number of the economically active people—77.5 per cent of the total population—is significantly higher than their dependents. This low dependency level makes more savings available for investments and economic development. And, ProJovem is helping Brazil take advantage of this 'demographic youth bonus' to maximize its growth potential. 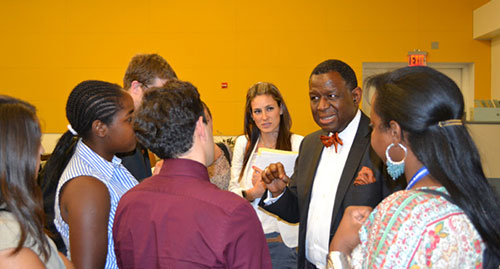 “Brazil’s commitment to youth is evident in ProJovem, where young people are given the education and training they need to become productive members of the economy,” said Dr. Babatunde Osotimehin, Executive Director of UNFPA. “Using a model that integrates education, work and citizenship, the process is taking a holistic approach to youth empowerment, ensuring that all areas of their lives are being enriched. This is the type of model that can be replicated through south-south cooperation in other countries around the world. The study issued today can act as an impetus to promote cooperation and engage young people in a holistic way.”

The Executive Director made those remarks after the introduction of the study on ProJovem at the United Nations High-Level Meeting on Youth taking place here on Monday and Tuesday.

“This is the type of model that UNFPA wants to support in partnership with governments, civil society and our UN partner agencies,” Dr. Osotimehin added. For its part, he said, “UNFPA is deeply committed to youth employment and social participation. As the world seeks to establish a green economy, we believe that young people must be positioned as entrepreneurs and leaders of innovation.”

“When young people can claim their right to health, education and decent working conditions, they become a powerful force for economic development and positive change,” said Dr. Osotimehin. “So, let us go forward to equip our youth with education, strengthen them with health services, and empower them with opportunities for leadership and participation.”

Since its creation in 2005, ProJovem has been targeting youth aged 18 to 24 who have neither completed primary school nor have any formal work experience. The programme helps these youth access education and professional training and promotes their social participation. This has helped break the cycle of poverty and exclusion that have characterized the lives of the targeted youth, and improved their self-esteem. So far, the programme has reached more than 800,000 of Brazil’s youth.

The UNFPA Executive Director then signed a Memorandum of Understanding with the Brazilian Government to facilitate south-south cooperation, with an emphasis on youth.