GYAMDA COUNTY, Tibet, China—Xi're Qunzong is one of two designated health workers at Niangpu Township hospital, with the responsibility of ensuring that no woman dies from giving life. She serves a community of 2,800 people living in eight scattered villages, the furthest taking up to six hours to reach.

A stressful experience last June still lingers in her mind. A young man on a motorbike came to ask for urgent assistance for his wife who was in delivery in the summer pasture of Ba'a village 30 kilometres away. Xi're rode with the man, carrying a basic delivery kit. When they arrived over an hour later she found the woman in critical condition from severe hypertension.

With no time to wait, she decided to take the woman back to the hospital. The woman's husband pushed the bike while Xi're walked alongside holding high an intravenous drip. They walked for walked two hours in heavy rain before reaching a point where they could be picked up by a car.

The discomfort the woman was suffering made the hard journey even more unbearable. "She wanted to jump off the cliff into the river because she could not cope with her headache. I thought, 'If she jumps, I will jump too.'" Xi're recalls. Fortunately, the woman delivered her baby safely after arriving at the hospital.

Xi're became a 'village doctor' (grassroots health worker) after graduating from middle school five years ago. In 2009 she was assigned to the township hospital, where she and four colleagues provide basic health care services. As a local villager herself, she knows what she does can be a matter of life and death.

"I still remember how nervous I was when I assisted birth delivery for the first time," she says.

Xi're considers herself lucky since her hospital was selected as a pilot in Gyamda County to explore community-based maternal health service models. Run by China's Ministry of Health with support from UNFPA, the project aims to improve access to quality services for Tibetan women in the area, contributing to a larger programme on improving maternal health in the country's western region.

Soon after the launch, the project organized a tailored training for township doctors on safeguarding the lives of woman and children. The curriculum was adapted to focus on the scenarios Xi're and her colleagues typically encounter, including performing basic antenatal care without ultrasound equipment, identifying high-risk pregnancies, and deciding when a patient needs referral.

"Besides the basic delivery kit, I should have brought oxygen with me when I rushed to Ba'a pasture that day," she states. "I would have felt less stressed if I had such training before."

Prior to this training, Xi're had been trained at the county hospital on collecting and reporting data, but she mostly learned her job through daily practice. Well aware of her responsibility to her patients, she says, "This training helps me to be more confident."

In addition to the technical training provided, the UNFPA-assisted project conducted focus group discussions to learn about barriers preventing Tibetan women in the area from accessing maternal care and services.

The semi-nomadic population is scattered across a vast spread of land, and residents often stay in remote pastures and mountains during the peak seasons for essential income-generating activities including farming, pasturing, and, unique to Tibet, the digging of caterpillar fungi for traditional medicine. A shortage of helping hands and a lack of transport for journeys that can take four to five hours travel on rough roads make it impossible for women to seek antenatal care during pregnancy or to go for hospital delivery.

Xi're now convenes monthly meetings, initiated by the project, with village heads, 'village doctors', women's cadres, and in some cases religious leaders; together they have formed a support network to help the Tibetan villagers access the services they need, especially during the busy seasons. At these meetings, they analyse every pregnant woman's needs and propose ways to help her, such as hiring a vehicle at a discounted rate and arranging helpers for farming or pasturing.

"I have more people to call upon now when emergencies happen," Xi're notes.

Training in basic essential obstetric care and quality antenatal care in and mobilizing community-based support is far from enough to meet local needs. The Chinese Government has implemented preferential policies in Tibet, including 100 per cent coverage of hospital delivery costs for rural Tibetans and additional financial subsidies for people with economic constraints.

The Ministry of Health's national Maternal Care Management Guideline issued in 2011 addresses the challenges nomadic Tibetans face. In addition to promoting hospital delivery, the guideline allows the option of home delivery by certified medical staff or midwives. This will provide space for exploring diversified safe delivery models that suit the local context, with support from UNFPA and the Ministry of Health.

Eager to learn more to serve her community better, Xi're hopes she will get a chance to receive in-service training for a longer period in the county hospital. She realizes that what she does is of vital importance, but what she can do is so limited. Much more is needed to ensure every birth is safe.

To improve maternal health among ethnic minorities in China's less-developed western region, UNFPA, the Ministry of Health and other national partners have selected six pilot counties in Guangxi Zhuang Autonomous Region, Tibet and Yunnan Province. Different intervention models are being tested to respond to specific needs and local cultural contexts in the project sites. It is hoped that the lessons learned from these pilots will help reduce regional disparities in achieving the MDG 5 on maternal health.

China's Progress Towards the Millennium Development Goals 2010 Report showed China had made outstanding progress in most of the MDGs. However the report also indicated that significant challenges still remain in achieving MDGs related to maternal health: 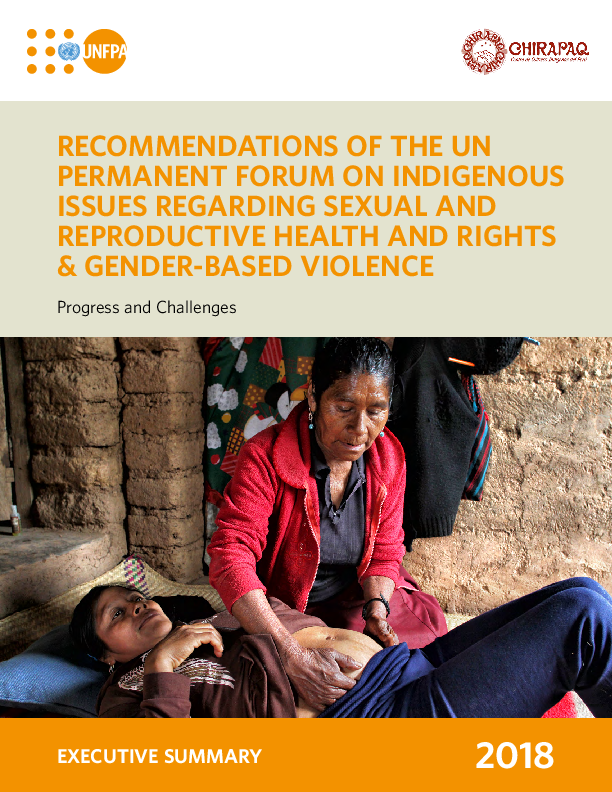 Executive Summary: Recommendations of the UN Permanent Forum on Indigenous… 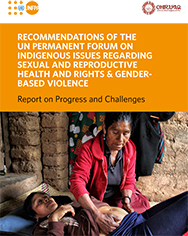 Recommendations of the UN Permanent Forum on Indigenous Issues Regarding Sexual…