Over coffee, young people in the Maldives discuss sexual and reproductive health

MALE’, MALDIVES – As the hammering, buzzing and whirring of construction drone on outside – the soundtrack of a growing capital city – young people gather at Male’s Jazz Café to talk relationships, sex and family planning.

“Today we are going to talk about healthy relationships,” says reproductive health facilitator Azzam Mohamed before a full house. Around him, waiters serve free drinks to the 30 young women and men who have come to this session of ‘Safe Space’, a UNFPA-supported forum where youth can speak openly about topics they otherwise find few opportunities to discuss.

“Why do we marry at such a young age?” Azzam asks the group.

In the Maldives, men marry at age 25.8 on average, and women at 22.5, according to UNFPA analysis building on 2014 census data. But divorce is on the rise, and about 10 per cent of young people aged 15-24 are already on to their second or third marriage. By the time they reach 25-29, 14 per cent of men and 20 per cent of women have married multiple times.

“Young people get married early because they long for privacy,” explains a young woman seated at the front table. “They live in very small apartments shared with their parents.” This seems to resonate with everyone.

In the Maldives, privacy isn’t the only thing reserved for married couples.

Marriage is a requirement for access to family planning services, and sources of adolescent- and youth-friendly information and services on sexual and reproductive health are scarce. The Society for Health Education (SHE), which hosts the Safe Spaces in collaboration with UNFPA, has the only such facility in Male’.

At today’s Safe Space, Azzam guides the conversation on to some difficult topics – using an interactive quiz that allows participants to answer anonymously, through their mobile phones. 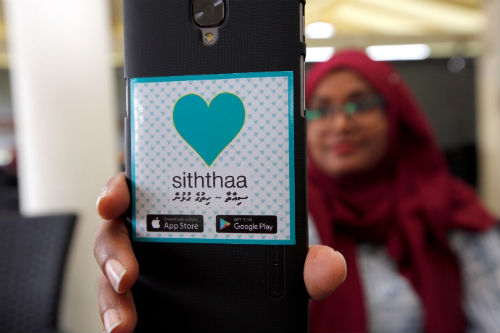 “What is an unhealthy relationship?” he asks.

Most participants respond soberly: “When I am coerced into doing things I don’t want to do.” Others opt for a laugh: “When we have burgers for breakfast.”

Emotional manipulation and violence are less readily cited. It’s a sensitive topic. According to the Maldives Study on Women’s Health and Life Experiences, about 19.5 per cent of women aged 15-49 who had ever been in a relationship reported experiencing physical or sexual violence by an intimate partner, while 29 per cent reported emotional abuse. Six years ago this week, the Maldives ratified its first-ever Domestic Violence Act.

As the discussion unfolds, the young people have an opportunity to clarify the boundaries that separate a healthy relationship from an abusive one. “Pressuring someone to have sex against their will, even if you don’t use physical force, is rape,” says Azzam.

“Consent matters,” adds Aishath Zahira, who volunteered at SHE and is now a leading trainer on HIV/AIDS. “When a girl says ‘no’, that means ‘no’.”

Talking is the first step to healthy decisions

Azzam keeps the questions coming: “Where can we get contraceptives in Maldives? Who’s responsible for buying them? How do you prevent an unplanned pregnancy?” 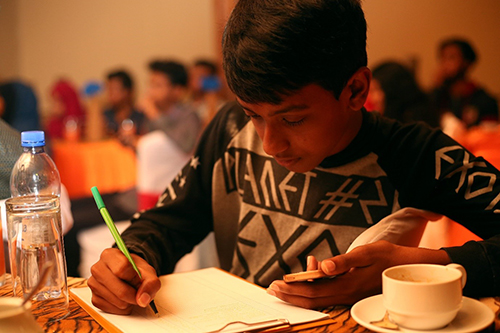 UNFPA and SHE are finding ways to create more opportunities for young Maldivians to access reproductive health information and services. © UNFPA Maldives/Ashwa Faheem

“Isn’t the couple supposed to support each other and discuss it together?” asks one of the young men.

Another objects – “You’re not supposed to talk during sex!” – making everyone laugh.

“Praying before and after sex might be a good idea, to help couples be on the same page and relax,” suggests another participant, echoing advice he got from a counsellor before he got married.

As the session comes to an end, Azzam urges the participants to become advocates for sexual and reproductive health. “Try to talk with someone about sexual assault, contraceptives, consent,” he says.

Adolescent- and youth-friendly venues like Safe Space offer a cost-effective way to bring sexual and reproductive health services to more young Maldivians. UNFPA and SHE are looking for avenues to expand these kinds of services, both in Male’ and throughout the country.

Aishath Shaduna, 22, recently joined SHE and became a youth leader and advocate for sexual and reproductive health. “I am really happy to be part of this session,” she says. “I wish we had more opportunities like this, to talk openly about these important skills for making healthy life decisions.”

My Body, My Life, My World: Operational Guidance