No mountain too high: Midwives protect women, save lives

YAKAWLANG/SANGTAKHAT, Afghanistan – Midwives serve in some of the most remote health posts in the world, saving the lives of women and babies in settings that are often harsh and resource-poor.

And their work can require them to confront attitudes that harm women’s health and demean their status and value.

This courageous work is being celebrated on 5 May, the International Day of the Midwife.

Soghra and Nabila are two such heroes.

They work in rural Afghanistan, where villages are scattered throughout the mountainous terrain. Communities there have limited access to basic health services, and some of the highest maternal mortality rates in the country.

Soghra works at a UNFPA-supported “family health house” in the hard-to-reach district of Sangtakhat. These facilities, established by the Ministry of Public Health, offer reproductive, maternal, newborn and child health services, including safe delivery care.

But Soghra also spends a lot of time visiting women’s homes to check on their welfare and to deliver antenatal care.

At one antenatal visit to a woman named Hosnia, Soghra discovered a life-threatening complication.

“During my visit to Hosnia, I found that her baby was wrongly positioned,” Soghra later described to UNFPA.

She advised that Hosnia should give birth at the provincial hospital, where a Caesarean section could be performed.

“Hosnia’s family insisted that, whether she dies or survives, the delivery must be done at home as they were very poor and could not rent a vehicle to take her to the hospital,” the midwife said.

But she stood her ground.

“I knew that taking her to hospital was the only option. I called a UNFPA contact who promised to cover the transport cost. Hosnia had a successful Caesarean delivery at the hospital. She came to thank me a week later for having saved her life and that of her baby.”

Every two hours, a maternal death

Afghanistan has the highest maternal death rate in the region, according to 2015 United Nations data. A woman dies roughly every two hours due to pregnancy-related complications.

UNFPA is working with the Government to expand access to midwifery services, including training midwives and supporting the creation of family health houses.

Since 2009, UNFPA has helped the health ministry establish over 120 of these family health houses. Each is a four-room building located next to the midwives’ residence, serving 1,500 to 3,000 people. There, midwives work with community health workers to provide services around-the-clock.

This year, the family health house project is being expanded in five provinces – Badghis, Kandahar, Khost, Kunar, and Samangan – with funding from Global Affairs Canada. The Italian Agency for Development Cooperation additionally supports family health houses in the provinces of Ghor and Herat.

Najiba works in one such facility in Sari-e-zolij, one of the hardest-to-reach, poorest areas in Bamyan’s Yakawlang District.

A few months ago, she cared for Fatima, who was pregnant with her third son.

Fatima experienced a prolonged labour, and after delivering her baby, she had to be carried to the post-partum care room.

Despite the difficult childbirth, Fatima insisted on being discharged right away.

“I, as a community midwife, had recommended that she stay longer at the family health house. She only agreed to remain there for the next 10 hours after delivery.”

“After four hours back home, she started haemorrhaging severely. One of her family members travelled to the family health house and asked me to go to their home and help,” Najiba recounted.

The situation was critical – haemorrhage is one of the top causes of maternal death globally.

“Since I knew Fatima’s condition, I packed some medicine and equipment which I took with me, knowing full well that a haemorrhage can quickly get out of control.”

She rushed to Fatima’s house, and called on a nearby community health worker to help her administer emergency care.

Together, she said, “we were able to stop the bleeding.”

Today, Najiba uses that experience to convince other women to seek and receive the care they need.

“I am able to advise other women about the importance of receiving proper emergency obstetric care so that they don’t experience what Fatima went through,” she said. 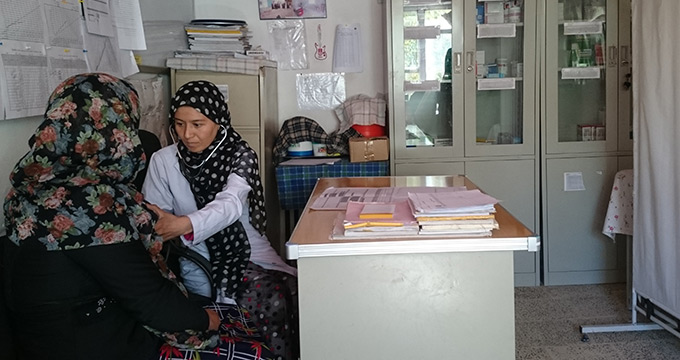 No mountain too high: Midwives protect women, save lives