MAROUA/YAOUNDE, Cameroon – “I was forced into marriage by my father at the age of 14,” Faouzia Yaya, now 17, told UNFPA. “My father insisted, even knowing I did not want it. I even ran away to my uncle’s place, but he still found me.”

During her brief marriage, Faouzia endured constant violence. “My husband used to beat me daily,” she said.

Child marriage is widespread in Cameroon, with over 20 per cent of girls aged 15 to 19 already married, according to a 2014 survey. But the country has just adopted a new law – passed in July – to protect girls like Faouzia.

If her father tried to marry her off today, he would be charged for two offences – forced marriage and child marriage.

A cascade of human rights violations

Child marriage unleashes a cascade of human rights violations. Child brides are more likely to be forced to leave school, depriving them of their right to an education. They are more likely to become pregnant as adolescents, which puts them at increased risk of maternal health complications. And they are also more vulnerable to abuse.

It is the most disadvantaged girls – those living in poverty, in rural areas and with few prospects for empowerment – who are most likely to become child brides. More than half of Cameroonian girls who have no education are already married, for instance, compared to 9 per cent of girls with a secondary education.

The new law will “protect women from repugnant cultural norms and practices that have hitherto exposed them to every kind of ill treatment,” said Marie Therese Abena Ondoa, Minister of Women’s Empowerment and the Family. 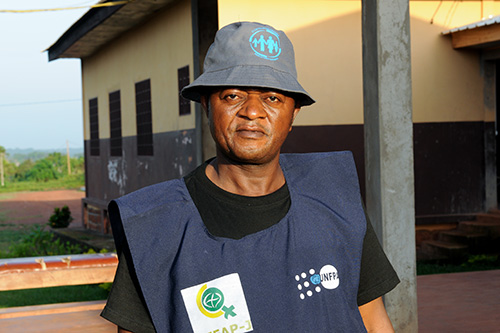 Mathieu Emo is a member of a "husband's club". These groups work with communities to end child marriage. © UNFPA Cameroon

“When the victim is under the age of 18, the punishment may not be less than two years imprisonment, regardless of the mitigating circumstances,” the code says.

It is a powerful step forward, Prof. Ondoa emphasized. “The law effectively marks a great stride towards the attainment of gender equality,” she said.

UNFPA is working with the Government and partners to support these efforts, including advocating for the policy to end child marriage.

UNFPA and the Government have additionally created seven call centres where women can report abuses. “Our field staff receive survivors and provide psychosocial assistance to them,” Prof. Ondoa said.

Her ministry is also working with UNFPA to develop a guide to addressing gender-based violence.

UNFPA is also working with local organizations to raise awareness of the harms of child marriage, and to empower girls to say no to the practice.

"In our fight against early marriages, we do door-to-door sensitization,” explained Mathieu Emo, a member of a “husbands’ club” established in 2015 with UNFPA support. 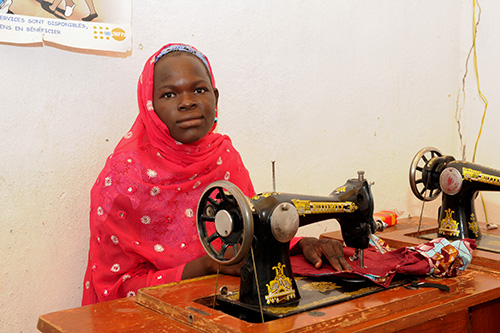 Faouzia is learning tailoring, a skill that will help her be independent. © UNFPA Cameroon

“After two months of marriage, the group which fights violence against women caught sight of my case and registered me,” said Faouzia. They helped her leave her husband.

ALVF, a UNFPA partner, teaches girls like Faouzia income-generating skills, which helps them secure their independence.

It also teaches girls about their sexual and reproductive health. The majority of girls receiving assistance are pregnant or already mothers, and unaware of how to avoid unwanted pregnancy or protect themselves against sexually transmitted infections.

Today, Faouzia is learning tailoring. “Now, I can sew dresses and earn my own money,” she said.

“If I meet a man I love, I will get married to him. I think that a girl has to learn a skill or go to school before going for marriage.”