MAROUA, Cameroon – "My village was attacked by Boko Haram,” Sylvie Tokofi, 18, told UNFPA in Maroua, capital of the Far North Region of Cameroon. “They killed my uncle and all the men.”

After that, her village was no longer safe. “My mother, my six brothers and sisters, and I fled to the mountain," Sylvie explained. Her education was discontinued, and life in displacement cast a shadow over her future.

That was nearly three years ago.

And she is not alone. The number of internally displaced people in the Far North Region has more than doubled since 2015, reaching over 191,000.

The hostilities have left a deep mark on young people in affected communities. Some have become withdrawn and isolated, others have imitated the aggressive behaviour they experienced.

There has been “an escalation of violence in schools” and “an increase of attacks with knives among students,” said Rene Teswe, the programme manager at Saare Tabitha, a refuge and training centre for girls in Maroua.

The instability has also left some young people vulnerable to violent extremist messages and recruitment efforts. 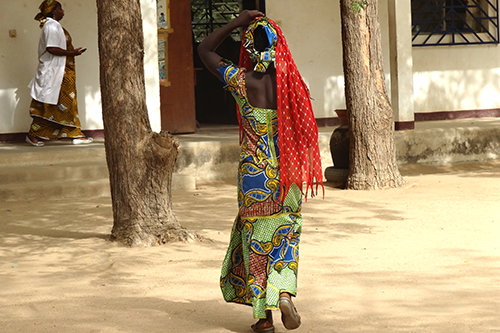 “The radicalized youth is not only the one who wants to join Boko Haram, but he is also the one who is exposed to violence by armed groups and adopts violent behaviour in his environment," explained UNFPA youth expert Soilihou Mforain.

The Far North is the poorest region in Cameroon, with 74 per cent of people living on less than $1.50 per day. Poverty, lack of opportunities and social exclusion are everyday realities for many young people.

UNFPA, the Food and Agriculture Organization and the United Nations Development Programme have launched a pilot programme to reach those who feel adrift.

The project, supported with funding from the Government of Japan, aims to enhance ‘social cohesion’ in displaced communities and host areas in Mayo Sava, Mayo Tsanaga, and Logone and Chari – areas in the conflict zone, also known as the “red zone.”

The initiative will reach over 500 vulnerable young people with messages about tolerance and peace. It will also provide psychosocial care and rehabilitation activities to over 100 youth who have been exposed to violent extremism, either as targets of attack or targets for recruitment.

Some 65 young people have already been trained, with support from UNFPA, to promote peace and tolerance among high-risk populations, such as out-of-school youth.

Samira, 26, has been trained to reach young people in her town, Tokombere. “I have already sensitized approximately 10 young women from my community," she reported.

A catalyst for change

The youth and social affairs ministries are also working with local organizations, such as JAPSSO, to identify youth in need of more intensive rehabilitation activities.

These youth are referred to one of two rehabilitation centres: Saare Tabitha, which serves girls, and the Institut Camerounais pour l’Enfance, which serves boys.

Survivors of violence and those who have been exposed to violent extremist ideas are separated and treated according to their individual needs, officials said.

The girls and boys receive psychosocial counselling and vocational training, which helps them build the skills to cope with their circumstances and to peacefully support themselves in the community.

“If we are able to sensitize and de-radicalize a handful of young people, they will become catalysts of change for the rest of the community and a model for other young people," said Ms. Teswe.

So far, 30 girls and 15 boys have been identified and referred to the respective centres.

Sylvie is one of the girls. She has become more confident, centre workers say, and she is learning to support herself as a seamstress.