KABUL, Afghanistan – “I was 15 years old when I got married, and my husband was 22. My sister-in-law saw me at one of my relative’s wedding and made all the arrangements for her brother to have me,” Sharifa recalls. Forty years later, she describes this as the start of a life derailed by obstetric fistula.

Today, Sharifa looks fragile in the way she moves, sits and talks. She is anything but.

“I delivered my first baby girl 11 months after my wedding, and five years later I had my second daughter,” says Sharifa. “I delivered four more children, but all of them were dead. I still don’t know why. I developed an obstetric fistula delivering the last one.”

She does not remember how long she was in labour because she lost consciousness. What she remembers is that after giving birth to her sixth stillborn child, a new nightmare began and lasted 20 years.

“I couldn’t go anywhere,” she says. “There were no Pampers [diapers] before, so I had to use clothes, and I couldn’t visit any relatives or work.”

Segregated from family and society 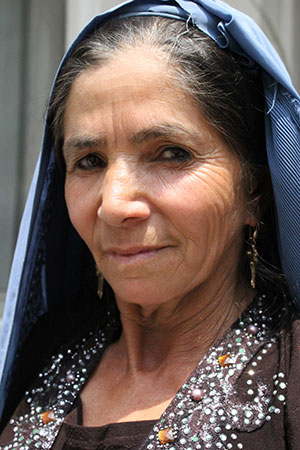 Sharifa's life is forever changed. After suffering from an obstetric fistula for 20 years, she underwent a successful surgery at the Malalai Maternity Hospital in Kabul. Photo credit: Zainab Hiadary/UNFPA Afghanistan

The isolation that Sharifa suffered is just one of the consequences of living with an obstetric fistula, a hole between the vagina and bladder or rectum, usually caused by prolonged labour without treatment. Fistula leaves women leaking urine or faeces, or both, and typically results in social isolation and depression.

Sharifa’s situation is typical of the majority of women suffering from obstetric fistula in Afghanistan. According to a 2011 report conducted by UNFPA, 25 per cent of women living with the condition were younger than 16 when they married. The study, conducted in six provinces, found four cases for every 1,000 women of reproductive age who is or had ever been married.

Afghanistan has one of the highest maternal death rates in the world. The three major killers are hemorrhage, pregnancy-induced hypertension and obstructed labour. Many women who survive childbirth subsequently suffer from injuries such as obstetric fistula.

Sharifa looked for treatment, and received two surgeries, but these proved unsuccessful. Her husband and in-laws decided that he should take a second wife.

“My husband married a second time because I had this problem. No one wanted to eat anything from my hands, so I started to look for a new wife for him,” says Sharifa. “I was the one who introduced her to him.”

After her husband married his second wife, Sharifa was left alone to resolve her situation. Eventually, she learned about Malalai Maternity Hospital, in Kabul, the only public health facility in the country that treats obstetric fistula.

“When I heard about the programme at Malalai Maternity Hospital, he didn’t want to support me. I had already had two surgeries, so he didn’t think they will cure me.” After asking for her sister’s help, and with financial support from her neighbours and an adopted son, she travelled to Kabul to get her third surgery.

“It’s been four years now since I got my life back,” she says. “Now I can visit my relatives and work.”

A lifeline for fistula patients

Sharifa was treated at the hospital’s obstetric fistula programme, which is funded by UNFPA. She stayed there for 21 days and was one of the first patients treated at the Fistula Ward, where about 100 women now receive surgery every year.

“In 2007, the obstetric fistula programme moved from a treatment-based care approach to one that promotes the prevention of obstetric fistula, its treatment and the reintegration of patients,” explains Mohammad Tahir Ghaznavi, the UNFPA officer in charge of the programme for Afghanistan.

“Through our programme, midwives and obstetricians are trained to prevent, diagnose and refer obstetric fistula patients, and the obstetrician and gynecologist surgeons at Malalai Maternity Hospital are specifically trained to treat them.”

Some of the medical staff at the hospital have also witnessed their share of inoperable cases, or situations in which women with children were abandoned by their families.

Sharifa was lucky enough to have the support of her neighbours, her sister and her adopted son.

“Even when she was sick, she was taking care of us,” says her son, Sayed Ahmad, who accompanied her to the hospital. “She is fine now, and we are very happy for her.”

Afghanistan: An escalating crisis for women and girls