HONIARA, Solomon Islands – By 11 am on 4 April, residents knew the Mataniko River might breach its banks in Honiara, capital of the Solomon Islands, but no one knew it would wash away their homes within the hour.

"I panicked, so I just collected some clothes for my children, gathered my kids and we left," said Alice. She, her husband and their five children found refuge in Mbokonavera Primary School. According to government figures, over 1,700 people were displaced by the deadly floods.

Their family lost everything, Alice said.

Today, more than four weeks later, most displaced people remain in evacuation centres. Many of them lack homes to return to.

UNFPA, the United Nations Population Fund, is providing humanitarian support for these families and others affected by the disaster.

As is the case in nearly every crisis, the affected population has been left in need of basic, life-saving reproductive health services. 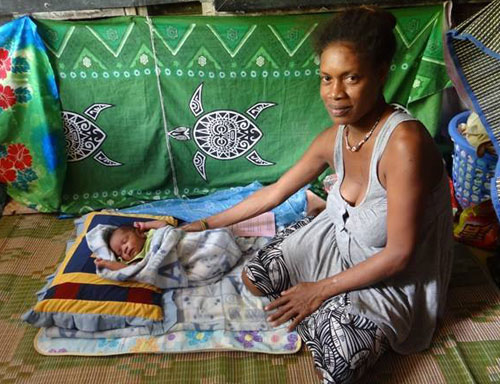 Seno Ogamiao, 28, had come to Honiara from Isabel Province to deliver her second baby. When the floods struck, she and her husband fled to an evacuation centre.

Ms. Ogamiao was brought to a hospital when she went into labour. After she delivered, she and the baby were returned to the evacuation centre.

There are 25 other pregnant or post-natal mothers at the centre, which UNFPA is supporting with dietary supplements and hygiene supplies.

Dignity kits with sanitary napkins and basic hygiene supplies are also being delivered by UNFPA Pacific.

“Nothing can prepare you enough for an emergency like this," said Bethlyn Warereo, a reproductive health nurse with the Ministry of Health and Medical Services (MHMS), who visits women in five evacuation centres every day.

Many young people have been displaced by the disaster. And with their schools serving as evacuation centres, many are not attending classes. Those living in the densely packed shelters face an increased risk of communicable diseases. 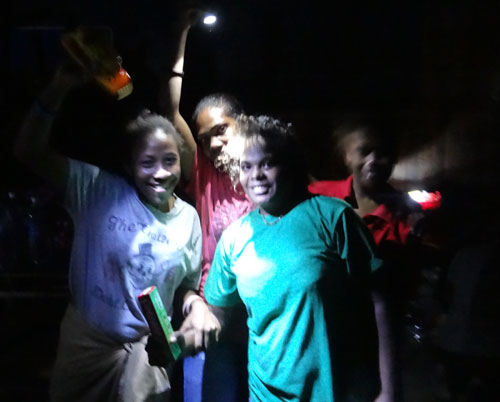 To address the needs of this group, the UNFPA Pacific Sub-Regional Office is working with the Solomon Islands Ministry of Health and the Solomon Islands Planned Parenthood Association to organize public health outreach in schools, churches and public spaces that have been turned into evacuation centres.

UNFPA has also teamed up with the health ministry’s adolescent health department to conduct discussions with youth on reproductive health-related concerns, including gender and safety issues. During these discussions, students are invited to talk about their own situations and to offer ideas and suggestions for improving humanitarian aid to address their needs.

One such suggestion came from displaced young women, who said they needed flashlights; without electricity, they felt insecure about going to the bathroom at night. Young people also noted that a cumbersome trip into town was required to charge their mobile phones, which they used to stay in touch with their parents. As a result, they felt isolated from their families and deprived of information.

UNFPA responded to these concerns by providing radio-flashlights with hand-powered cranks that can generate electricity for charging mobile phones.

"Adolescents are the next leaders of the Pacific. Their health is the basis for a healthy nation, and their well-being is key to national development," said UNFPA Pacific Director Dr. Laurent Zessler.

"It is critical that they receive complete and accurate information and access to services [for] reproductive health care and nutrition. And it is also critical that they have the skills to take a stand against gender-based violence on their campus, in their society and in the country," he added.