She had been suffering intense pain in her pelvic area for a long time, but because her rural village in Popasna District lacked medical specialists, like gynaecologists, she had refrained from seeking care. Specialists were available in the district clinic, 10 km away, but Valentina said her poor eyesight prevented her from traveling that distance.

It was not until the UNFPA-supported mobile clinic arrived that she was able to get an examination from a gynaecology specialist, who quickly diagnosed and treated a precancerous condition.

When the mobile clinic returned over the summer, Valentina was among the first in line. “I am very pleased,” she reported after her consultation. “The doctor checked my current condition and prescribed maintenance treatment.”

About 60 people visited the mobile clinic in her village this year. Since July, nearly 880 patients have received consultations from the various mobile clinics deployed in the district.

While Valentina struggled to receive specialist care due to her eyesight, others face financial barriers to receiving care, or are too ill to travel.

And for many living in and around the so-called “grey zone” – a snaking territory between government-controlled and occupied lands – fear of hostilities further limits access to health care.

“During one and a half months of work, we found four cases of gynaecological cancers and a liver cancer,” said Igor Ieriomin, a family doctor working in one of the mobile clinics.

“Even being aware of the diagnosis, people very often do not go to oncology centres because they believe that they live in a dangerous area where their lives could be ended at any moment by a random bullet.”

Ievghenia Kyslytsia, a gynaecologist, recalled one elderly woman who was diagnosed with advanced uterine cancer.

“She suffered from pain for a year but did not see the doctor because she couldn't afford to pay for a car to take her to a hospital. And we see many such cases,” Dr. Kyslytsia said. “The war has caused a great deal of stress to the population as well as significant economic difficulties.”

She noted an uptick in the cervical cancer cases she has seen, which she attributes to poor rates of vaccination against the human papilloma virus and lack of knowledge about sex education among young people.

“We have already diagnosed two such cases this year,” she said.

Reaching the most vulnerable

In July, with the support of the UK government, several additional UNFPA mobile clinics were launched in Luhansk and Donetsk oblasts, where they serve largely remote and conflict-affected communities.

In addition to providing medical services, they also provide psychosocial assistance and support for survivors of gender-based violence.

The clinic staff know they are working under dangerous conditions – not only due to the ongoing tensions in the area but also because of the COVID-19 pandemic.

But they are undeterred. They even perform house calls for clients unable to reach the mobile clinics on their own, bringing along disinfectants and wearing protective masks and coveralls to minimize risks.

Dr. Kyslytsia says she knows how important it is to continue offering these services.

“Last year, when I first visited the oblast villages and settlements located along the contact line as part of the UNFPA clinic team, I saw these old ladies who had not been examined by a doctor for several years,” she said. “It is so good that we have a car and we are able to deliver services to those who cannot get to a hospital.”

Dr. Ieriomin agrees: “You see how remote some villages are. Those people are my compatriots.” 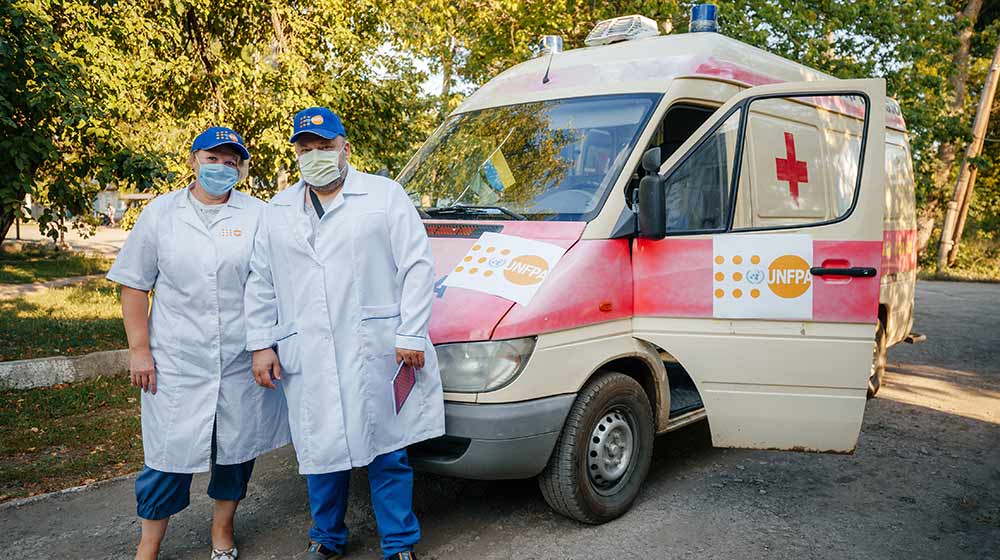