ZA’ATRI CAMP, Jordan –- Holding a newborn in her hands is like “heaven” says a young midwife Ghadeer Taher Horani, who struggled to find the exact words to describe the feeling of delivering babies.

Ghadeer, 24, has been a midwife for just two years. the last seven months have been spent with Syrian refugees in the Za’atri camp in Jordan, where she evaluates the health condition of pregnant women, provides pre- and post-natal care, as well as family planning counselling.

As a standard rule in Jordan, midwives cannot assist in deliveries without the supervision of an obstetrician. But during the seven-month period, Ghadeer has been called on to deliver two babies all by herself in emergency situations. 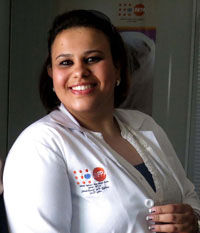 “The first happened in March. Someone came to the clinic and asked me to see this pregnant refugee in her tent who is experiencing some pain. I rushed to see her. She was only eight months pregnant but was in labour,” Ghadeer recalls.

“The woman was lying on the ground outside her tent but there was no time to move her to another place. She was fully dilated. Quickly, I  put on gloves and delivered the baby,” the midwife narrates with excitement.

She sent both mother and baby to the hospital in the camp for further check-up, and both were declared in good condition.

The second emergency delivery happened in early May. Ghadeer was on night shift duty in the Za’atri reproductive health clinic when an ambulance carrying a refugee in her seventh month of pregnancy arrived. Ghadeer rushed out to meet the patient, whom she thought was just being taken to her for evaluation.

Witnessing the miracle of new life in a time of chaos

“As soon as she got off the ambulance, I realized she was in labour. She couldn’t move anymore and the baby was obviously coming. I delivered the baby where the woman was lying on the ground outside the clinic,” Ghadeer says. The baby, who weighed only 1,200 grams at birth, was immediately taken to the hospital. 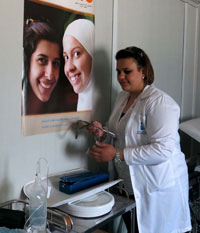 While Ghadeer describes both experiences as “exciting,” she says they were also nerve-wracking as she had to act quickly, without the usual medical equipment, supplies and support at hand.

“They were different from how I assisted deliveries in a private hospital before. In the hospital, everything we need to safely deliver a baby is available. If a complication occurs, we have the facilities to address that,” she explains.

Despite the challenges, Ghadeer is happy to contribute her time and skills to help the women refugees. “I think I’m doing something good for these people, I feel happy and I love what I do for them,” she says.

Ghadeer’s mother encouraged her to become a midwife and she does not regret heeding the request. “I love the environment of work in a delivery room and I love the feeling of holding a newborn baby in my hands. I can’t exactly describe it but it’s like heaven.”

But with the babies she delivered in the refugee camp, she says the feeling is more special. “Holding them in my hands, I felt a certain kind of attachment. Maybe because it’s a miracle that they lived to see the world despite the chaos going on around them.”