CHIȘINĂU, Moldova/UNITED NATIONS, New York – Maria Roșca has been alone for months. The 73-year-old widow hasn’t left home since the COVID-19 lockdown began. “I keep the TV and the radio on to feel like I’m not alone in the house,” she told UNFPA.

But her sense of isolation isn’t new – just exacerbated. Moldova has one of the highest emigration rates in Europe. Ms. Roșca’s daughter lives in Italy and her son in Russia. “My children can’t even come home to see me because the borders are closed due to the pandemic,” she explained.

People aged 60 and older account for about a fifth of Moldova’s population, and they often live on their own, facing higher-than-average poverty rates.

“This pandemic exposes the cracks in our society,” said UNFPA Executive Director Dr. Natalia Kanem, at a high-level virtual event convened by UNFPA and the World Health Organization to address the health and rights of older persons amid the COVID-19 crisis.

“There are huge fault lines of age discrimination, of racism, gender discrimination, and of discrimination by ability and mobility,” Dr. Kanem said. “Yet the pandemic also creates an opportunity. It calls on all of us to reset and build a more equal world for everyone of every age group.”

Part of the solution

The pandemic has been particularly catastrophic for older people, who face a higher risk of severe COVID-19 outcomes. Necessary non-COVID-19 health care, essential supplies and social services have become less accessible due to the international health crisis.

“I can't make money, and I have used up all my savings,” said 71-year-old Prapai Amornsak from Thailand.

“We are not getting medicine,” added Sher Shah, 73, from Pakistan.

Yet older persons are not simply victims of the crisis; they are also active participants in the response, said Dr. Tedros Adhanom Ghebreyesus, Director-General of WHO.

“We have seen the resilience of older people, as health workers have come out of retirement to lend their expertise to colleagues on the front lines, while others have volunteered to support their communities,” he said.

“Older persons are the world's fastest growing and least used asset,” said Dr. Arun Maira. “Older people, including myself, should be seen as part of the solution, not part of the problem.”

Solidarity is the key to a new UNFPA initiative in Moldova, which seeks to create intergenerational bonds between young people and their elders. The initiative highlights the critical role of older persons in society, and calls on younger generations to forge ties and provide support to those in need.

“I wanted to volunteer for this project because I know how difficult it is for an older person who can’t be with their children or grandchildren, but also to fill the void in my soul since my grandfather, who was the sunshine in our household, died three months ago,” said Nelea Ungureanu, a high school student volunteering with the programme.

Nelea spends time with Ms. Roșca – whom she calls “Aunt Maria” – and other older community members. They speak over the phone and have socially distanced visits.

Nelea says she has benefitted a lot from these relationships. “It gave me a chance to learn their stories – some very sad, but others inspiring,” she said. “Older people are the ones we go to for advice, help and support, but they are also the most vulnerable, especially now in the pandemic context.”

Another volunteer, Maria Negru, agreed that the initiative benefits both generations.

“I laughed with the older people I called, and I cried when they told me about their relatives who emigrated from the country,” she said. “But just as often as I encouraged them, it worked the other way around, too – they encouraged me.”

The young volunteers received training from a psychologist and an epidemiologist. So far, some 200 isolated older persons in Moldova have been reached through the programme.

“The data and evidence we have are telling us that age matters, that gender, age, poverty frequently spell the difference between life and death,” Dr. Kanem said at the high-level event.

“Older people say we need a strategy and a coherent policy,” she added. “Our imagination has to be called into play. How are we going to build back better from this crisis?” 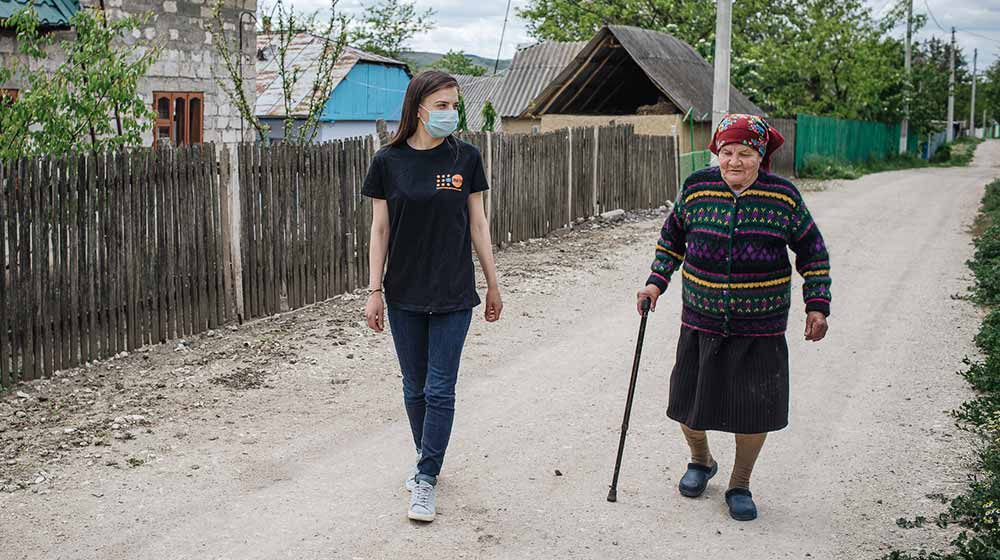 In crisis after crisis, mothers around the world are asked to do the impossible