NAKURU, Kenya — George O. and his girlfriend of four years were living an idyllic romance. The time had come, they agreed, to move the relationship a rung higher – get married. Their families were very supportive. As practising Catholics, they wanted things done right – the Christian way! George visited his parish priest for advice. The priest counselled him to start with a visit to the HIV/AIDS Voluntary Counselling and Testing Centre (VCT). He thought nothing of it. After all, at 20, he had had only one girlfriend his entire life – the one whose hand he was about to ask in marriage. And she had always pledged faithfulness to him. What could go wrong? 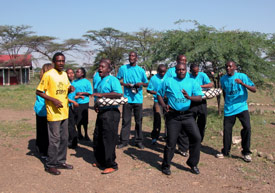 Members of the Tushauriane Theatre Group of the Catholic Diocese of Nakuru's Peer Counselling Programme in Kenya  Photo: George Ngwa

The results came back. Both tested positive for HIV. George's life imploded. What followed took him to the brink: denial, rejection by family and friends, stigmatization. His fiancée died soon after. He peered into the future and all he could see was a long dark tunnel with death at the end. He contemplated suicide several times, but could not go through with it. Then, his parish priest stretched a hand and invited him to join the Peer Counselling Programme of the Catholic Diocese of Nakuru. That saved his life. He is now one of several hundred beneficiaries of the programme.

George’s story is not unique among people living with HIV. What is uncommon is that he has been able, with the help of the Catholic Diocese Nakuru, to turn the negative into a positive campaign to prevent adolescents from being an additional statistic on Kenya’s HIV/AIDS roster.

The Peer Counselling Programme, which is funded by UNFPA, the United Nations Population Fund, was launched by the Catholic Diocese of Nakuru in 1996 to meet the growing needs of secondary school students in reproductive health. It was informed by the realization that 25 per cent of secondary school students were sexually active. Of these, up to 80 per cent had already contracted at least one sexually transmitted infection, with females bearing the brunt. Current statistics indicate that, in some areas of the country, 22 per cent of females aged 15–19 years are infected with HIV, compared with 4 per cent of males the same age. Also, 37 per cent of women aged 20–24 years are infected, compared to 11 per cent of men.

The Peer Counselling Programme is part of the Catholic Church of Kenya’s basic response to the HIV/AIDS pandemic. Its main pillars include prevention initiatives, provision of care for people living with HIV, pastoral counselling, and care for orphans.

As part of its contribution to the Diocese’s initiative, UNFPA provides the programme with financial assistance and information, education and communication materials. The programme, in turn, provides its audience with the education needed to change risky behaviour. Sexuality is dealt with in the light of the Church’s moral teachings. This means that emphasis is placed on chastity, fidelity in marriage, and abstinence.

“We don’t mention condoms (as a preventive measure),” says Bishop Peter Kairo, head of the Catholic Diocese of Nakuru. At the onset, this was a potentially explosive area of difference between UNFPA and the Diocese. The former bishop of Nakuru even led an anti-condom march in Nairobi that culminated in a bonfire. But, as Judith Kunyiha-Karogo, a UNFPA National Programme Officer, described it: “The Catholic Diocese of Nakuru’s programme is a testament of deliberate and focused advocacy taking into account the sensibilities of the faith community.”

In the early 1990, most of the faith-based organizations, including the Catholic Church, were opposed to promotion of condoms in HIV prevention and consequently engaged in public displays of resistance, such as the burning of condoms. “There was tremendous resistance to UNFPA’s position on adolescent reproductive health,” said Ms. Kunyiha-Karogo. “But we were able to sit down and talk and reach a consensus, taking into account the cultural and religious context.”

Bishop Kairo adds: “We view our relationship with UNFPA, as with the Government and other organizations, as an equal partnership based on mutual respect. We can work together as long as we do not seek to undermine each other.”

Some peer counsellors admit that not mentioning condoms poses a challenge to their work, as many of the youths they speak to argue that, although abstinence is ideal, condoms remain the most effective prevention method for the sexually active. UNFPA provides support to the comprehensive approach to HIV prevention, which includes the 'ABC' approach (Abstain, Be faithful, use Condoms), through its work with other partners such as governments.

Although initially focused on providing relevant and factual information on HIV/AIDS to adolescents in 15 secondary schools in Nakuru, the Peer Counselling Programme has expanded its activities to include training for some 700 peer counsellors, 100 teachers and 100 opinion leaders, including clergy from other faith-based organizations.

The programme now also covers VCT services, targeting out-of-school youth and those in the rural areas. The aim is to encourage them to learn their status and to reduce risky behaviours.

The main vehicle for these messages is Tushauriane, a theatre group created by Diocese in 2000 to foster the mission of its Peer Counselling Programme.

The young people who comprise the group are all volunteers. Like their peers in the counselling programme, members have received training in issues related to sexuality, adolescent and youth crises, sexually transmitted infections, including HIV, gender, VCT services, life skills, female genital mutilation/cutting and substance abuse.

Messages are woven into skits, choral verses and song and dance to reach various audiences.

The immediate result is the growing number of people visiting the VCT centre at the Catholic Diocese of Nakuru.

So far, 506 female and 455 male clients have benefited from VCT services. Clients are also provided with confidential referrals and additional follow-up services in the community. That includes antiretrovirals subsidized by the Diocese, education and nutrition for those living with HIV, family planning, and services to address sexually transmitted infections.

As George O. put it: “Without the programme, I’d be dead today. The peer counselling programme has become my family, and I am training to be a counsellor so as to share my story with others.”

Other successes include a growing demand for the Diocese to share its expertise in peer counselling not only from church groups within the country, but also from Ethiopia and Uganda.

Nevertheless, challenges remain, including lack of funding to meet increased demand for VCT services and to train counsellors. Testing kits and behaviour change communication materials are also in short supply.

“The commitment of the Kenya country office remains steadfast to continue partnering with the Catholic Diocese of Nakuru and other faith-based organizations in intervening with the young people of Kenya in the fight against HIV and AIDS," said Fabian Byomuhangi, the UNFPA Deputy Representative. “Our experience shows that friends and partners exist in several fora. We need just to reach out to them, share our visions and reach a mutually beneficial understanding.”