This year's State of World Population report, which launches 30 October, will deal with the issue of adolescent pregnancy.  The following story describes a model programme in Jamaica that helps pregnant girls and young mothers continue their education and fulfil their potential.

KINGSTON, Jamaica — "Becoming pregnant at such a young age was a terrifying experience. I did not know what to do when I found out," said 17-year-old Joelle as she recounted the emotional turmoil of being pregnant during her teenage years.

"It was going to be my final year in high school. I would have been graduating and making my parents proud," she recalled.  "I was so horrified, ashamed and devastated to see that all the things I wanted would not happen."

Joelle was one of two girls who candidly shared their experience with the First Lady of Burkina Faso, Chantal Compaoré, and her team, who were in Jamaica to learn about the strategies the government has employed to address adolescent pregnancy in the country.

The Adolescent Mothers Programme of the Women's Centre Foundation of Jamaica that Joelle is enrolled in is a centrepiece of these strategies, a UNFPA 'good practice' and a model for other countries grappling with the issue of teen pregnancy. "We've facilitated visits of many country delegations to Jamaica to explore the model in an effort to replicate it in their home countries," says  Melissa McNeil-Barrett the assistant representative for UNFPA in Jamaica.

Joelle described the organization and the counsellors who are caring for her during this difficult period as "firefighters who rescued me from the mental burning building I was in."  She also told the Burkinabè delegation that through the intervention of the Centre she was able to finish high school and was now awaiting the results of her end-of-year exams.

"Thanks to the Women's Centre, I have a second chance to make things right, to have an education and to make my parents proud again," she said.

Since 1978, the Programme for Adolescent Mothers has been providing continuing education, counselling and practical skills training for mothers under age 17. Through the programme, they can pursue their education at the nearest Women's Centre for at least one semester and then return to the formal school system after their babies are born. A new policy goes into effect soon (see below), but in the past, pregnant girls were routinely kept out of school.

The Foundation operates seven main centres and nine outreach stations across Jamaica, and provided continuing education to 1,402 adolescent mothers in the 2011-2012 school year, more than half of whom successfully returned to the formal school system. The Centre also offers a range of other services such as day care facilities and walk-in counselling for women and men of all ages. This includes counselling for 'baby fathers', their parents and the parents of teen mothers.

Jamaica's adolescent pregnancy rate has dropped from a high of 31 per cent in 1978 to 18 per cent in 2008.  But with a teen fertility rate of 72 births per 1,000 women ages 15-19, there is still a significant need to focus on this population, as well as on younger adolescents.

Putting family planning at the core

Family planning is an integral element of the counselling programme offered at each branch of the Women's Centre of Jamaica, and UNFPA has partnered with the organization for years to help reduce the risk of unwanted second pregnancies among mothers they counsel.

With the knowledge and consent of their parents, the young mothers are provided with sexual and reproductive health information and offered a contraceptive method of their choice, which helps them to delay a second pregnancy and enables them to complete their education. With support from UNFPA, the Women's Centre distributed more than 10,000 male condoms and 6,000 female condoms between 2008 and 2011 alone.

Over the years, the Centre has succeeded in keeping the second pregnancy rate of the adolescent mothers enrolled in its programme below two per cent. It has also been effective in helping students complete their secondary education and even advance to university.

Back to school: The success of advocacy 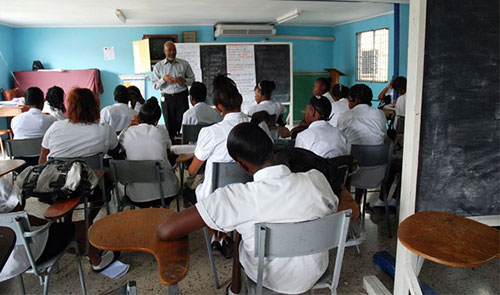 In Jamaica, the immediate consequence of teenage pregnancy is expulsion from school, so reintegrating adolescent mothers into the formal education system has been a key priority.

These efforts have recently paid off in a landmark achievement when the 'Policy on the Re-Integration of Adolescent Mothers into the Formal Education system' was approved by the Cabinet in May 2013. This policy breakthrough, spearheaded by the Women's Centre of Jamaica Foundation and the Ministry of Education, with support from UNFPA, will allow all school-aged mothers to continue their education during and after the birth of their child.

As of September 2013, when the new policy goes into effect, teenage mothers will no longer face the risk of being denied entry back to school, something various institutions routinely reserve the right to do for fear the girls might have a 'negative influence' on other students. Schools are now mandated to accept adolescent mothers back into the formal education system after they give birth. Moreover, the young moms will have the choice to attend a new school or to return to the one they left.

UNFPA will be actively supporting the implementation of this Policy. It has also invested in providing IT equipment and computers to help the girls strengthen their technology-based skills as they prepare for exams or to head back to school.

"The education of our girls is a strength of Jamaican culture and history," says Ronald Thwaites, Jamaica's Minister of Education. "We want to give every girl, no matter what her circumstances, even if she has become pregnant and had a child. We want to lift her up, make sure she gets the best opportunity. We are a nation of second chances." 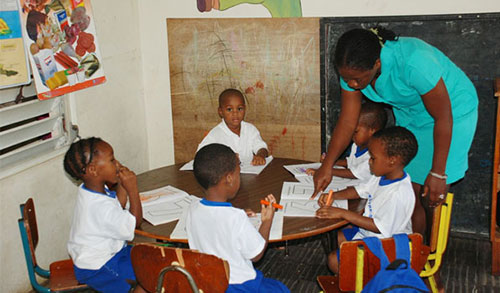 While addressing the young mothers' challenges is the main priority, engaging men and providing them with information and counselling has also been a central element in the Women's Centre's successful strategy.

As part of the Centre's ongoing peer counselling services, UNFPA has supported the training of 50 young men in the Clarendon and Manchester regions of Jamaica. Through various activities, they help to sensitize their peers on sexual and reproductive health issues including family planning, HIV prevention and sexual and reproductive health services. The young men attend Centres or outreach sites close to their homes and provide their respective outreach managers with reports on their activities.

The Women's Centre has also been leading the innovation path by providing day nurseries at all of its locations. In 2012, a total of 603 babies were registered in these nurseries throughout the year.

These unique facilities allow the adolescent mothers to breastfeed at convenient times during the day under the supervision of professional caregivers who also care for the babies and offer guidance on motherhood and parent/child relationships.

This initiative has also allowed the Women's Centre to generate income and offer its nursery services to other teenage mothers outside the network. The "Chubby Cheeks" Day Nurseries which are associated with Kingston centre, for example, cared for dozens of babies of teen and working mothers.

Sharing knowledge across the South

Through the work of organizations like the Womens' Centre, Jamaica is increasingly being recognized as a model in tackling the challenges of adolescent pregnancy and providing support to young girls who become pregnant while still in school.

The recent visit by the First Lady of Burkina Faso is just one of the missions facilitated by UNFPA – and the first from outside of the Caribbean region – in its efforts to increase South-South cooperation. After her visit to Jamaica, Ms. Compaoré expressed hope that Burkina Faso would become a leader in preventing adolescent pregnancies and supporting adolescent mothers in West Africa.

UNFPA, through its Sub-regional Office for the Caribbean, has previously facilitated exchange visits with the governments of Grenada and the Turks and Caicos Islands among others. As a result, Grenada has already established a model based on the Womens' Centre of Jamaica Foundation. Non-governmental organizations in Guyana have also replicated elements in their national programmes. 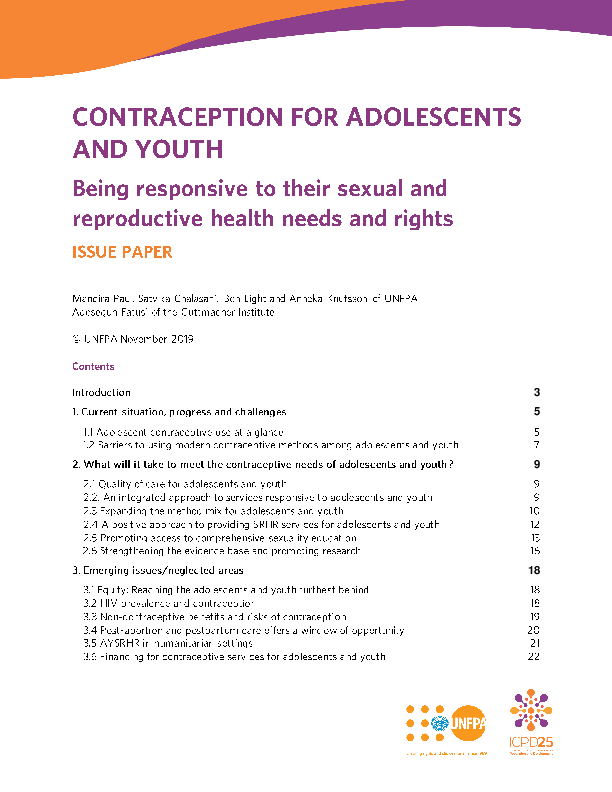 Contraception for Adolescents and Youth