Before it’s too late: Doctors take on one of the deadliest places for women

/unfpa-suppliesKELO, Chad – Fifteen nurses and midwives sit in a spacious classroom in Kelo, in southern Chad. In the corner is a makeshift delivery room, where pregnant mannequins wait in various stages of labour. Plastic babies, placentas and umbilical cords cover the table.

With these tools, along with an intensive curriculum, health workers are learning techniques to improve maternal survival in one of the world’s deadliest places for mothers. 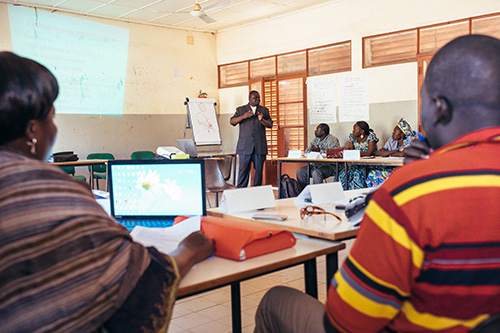 As a UN volunteer from Burkina Faso, Dr. Youssifou has been tasked with improving the state of maternal health care for thousands of women. The challenges he faces are enormous.

Chad has the second highest maternal death ratio in the world, according to last year’s Trends in Maternal Mortality report. And Chad has the highest lifetime risk of maternal mortality: a staggering 1 in 15.

Part of the problem is that the health workforce in Chad is tiny. Dr. Youssifou is reportedly the only gynaecologist-obstetrician in all of Tandjilé – a region that, at the time of the 2009 census, had nearly 700,000 people.

As a result, only 17 per cent of births in the country are attended by skilled health personnel, such as a doctor, nurse or a midwife, according to the 2014 State of World Population report. And only 3 per cent of women who are married or in a union use a modern form of contraception – even though contraceptives lower the incidence of maternal death.

When women are able to reach a health facility to deliver, the health personnel they encounter may not be properly trained.

This is where Dr. Youssifou steps in.

“One of my main duties is to provide training for reproductive health workers and improve their competence in different areas of child birth, family planning… and antenatal services,” he said during a short break in the class. 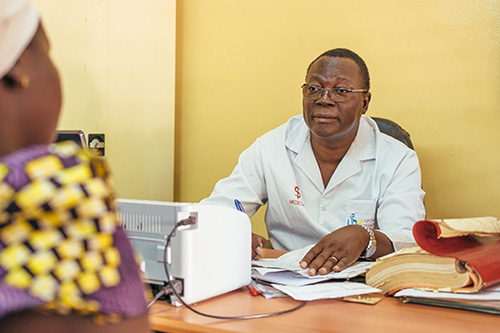 Dr. Alkouma Ndiah has seen too many preventable maternal deaths. Here, he speaks with a patient at Koumra Regional Hospital. © UNFPA/Ollivier Girard

Volunteers like Dr. Youssifou are supported by UNFPA, which covers their salaries and helps them travel across the regions, passing along their expertise and skills.

In the neighbouring region of Mandoul, at Koumra Regional Hospital, another UN volunteer, Alkouma Ndiah, has just completed a Caesarean section, saving the life of his patient.

Like Dr. Youssifou, he is also the only qualified gynaecologist in his region.

Each month, he performs 12 successful operations like the one he has just finished, he told UNFPA. He sees many treatable pregnancy complications, but lack of proper care means women typically arrive in a dire state.

“By the time they are rushed to the hospital, it’s often too late,” he said.

The training programmes run by Dr. Ndiah, Dr. Youssifou and others are making a difference – not only in emergency situations, but in women’s everyday health. 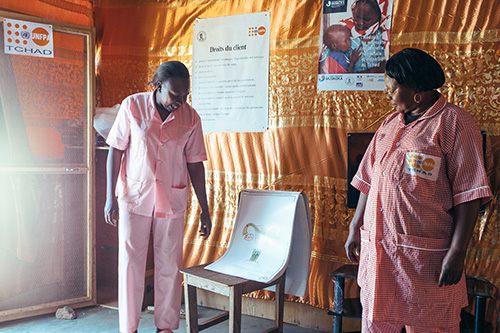 Midwives and nurses have been trained to educate communities about the health benefits of contraceptives, for example. They also encourage women to receive antenatal care and, if possible, to give birth under the care of a trained professional.

They have become more proficient at their jobs, said Molopal Pelagie, a midwife who participated in the programme.

It is just one part of a host of efforts to improve maternal health. UNFPA is also providing ambulances, hospital equipment, family planning materials and other essential supplies to health facilities.

“By the end of 2016, we will have a critical mass of well-trained midwives – part of a roadmap for the reduction of maternal mortality in the country,” said Rostand Njiki, a reproductive health specialist working for UNFPA in Chad.