COLOMBO, Sri Lanka – Young people hold the keys to the future; unlocking their potential will lead to a better world for everyone. These facts are supported by mounting evidence from Sri Lanka, where UNFPA has worked with policymakers and other partners to support and empower youth.

Like much of Southeast Asia, Sri Lanka began to experience a ‘demographic dividend’ – a potential economic boom that occurs when falling fertility rates coincide with a growing working-age population – around two decades ago, according to a recent publication, “Investing in the Demographic Dividend: Successes, Challenges and Way Forward for Sri Lanka.”

The report, co-authored by the Colombo-based Institute of Policy Studies and the UNFPA office in Sri Lanka, showed that investments in health and education have generated benefits for youth, and that further investments are needed to consolidate these gains.

Investing in young people is the theme of this year's World Population Day, on 11 July.

Demographic dividends are critical periods for investing in young people.

“It is estimated that the onset of the demographic transition started in 1992 and [will last] till 2037,” said the report, which was launched in May at the World Conference on Youth in Colombo. 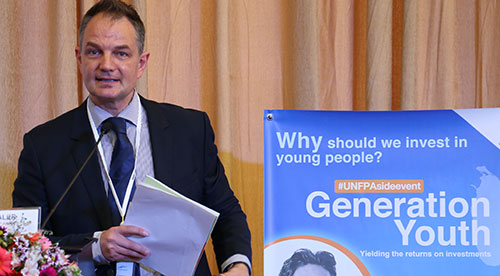 Since the 1970s, UNFPA has worked with partners, including policymakers, in Sri Lanka to improve the quality of maternal and newborn care, increase access to sexual and reproductive health services, and promote education and programmes for youth.

“Sustained and increased investments in sexual and reproductive health services [have] tremendous benefits to women, families and societies,” the report indicates. These services have helped bring about one of the lowest maternal mortality rates in South Asia, with 38.6 deaths per 100,000 live births, according to the publication.

Such interventions do not simply save lives – they also contribute to families’ overall well-being, which can lead to a host of other benefits.

The country has also benefitted from increased investments in education, with a “significant increase in [the] number of teachers in government schools” taking place between 2007 and 2012.

The enrolment rates in primary and junior secondary school have reached 95 per cent and 93 per cent respectively, the report says. 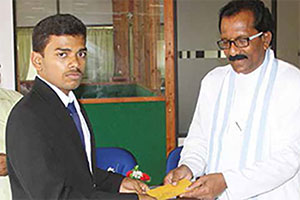 “Life was not easy,” Sivagnanaselvan Dinesh told UNFPA. “We often sacrificed luxuries in food and clothing to stay afloat.” Mr. Dinesh, who grew up in war-affected Jaffna, was interviewed as part of “Generation Youth: Yielding the Returns on Investments,” a publication showcasing the stories of young leaders in the country.

“Despite our hardships, I was always determined to turn things around. The key to my success lay in... quality education,” he said.

Mr. Dinesh is now a medical student, and he looks forward to giving back to his community when completes his training.

Still, much work remains to be done.

While health and family planning programmes are available around the country through a decentralized field health system, resources are often scarcer in districts that were affected by conflict and in poor, rural areas.

“It has been estimated that raising female employment levels to that of male levels could have a direct impact on GDP… However, the latest available data and indicators reflect that gender equality in Sri Lanka is not as satisfactory as its achievements in other human development indicators,” according to the report.

Ultimately, the future of the country, and the world, rests on the fate of young people.

“Youth are not demanding support,” said Ahmad Alhendawi, the UN Secretary-General’s Special Envoy on Youth, who attended the launch of the report. “They are asking for investments.”