BAIE D’ORANGE, Haiti – Reaching the health clinic closest to Baie D’Orange, a remote, landlocked town in the southeast of Haiti, requires walking two hours over poor roads to the town of Seguin.

As a result, women and girls living in this impoverished town of 10,000 lack regular access to sexual and reproductive health and family planning services, many pregnancies are unplanned and the maternal death rate is higher than the national average – which, at 359 deaths per 100,000 live births, is already the highest in Latin America and the Caribbean.

“I have plenty of children, and I cannot properly take care of them. I cannot even send them all to school,” says Thérèse Dalvi, a 35-year-old mother of eight living in Baie D’Orange, of her desire to access family planning and contraception.

In addition to health services, running water and electricity are all but non-existent here in Baie D’Orange – and towns like it across the island nation, forcing most residents to store drinking water in buckets inside their homes. However, this standing water can also serve as a prime breeding ground for mosquitos at a time when mosquito-borne Zika virus is spreading across the country.

Overwhelming scientific evidence suggests that Zika virus can be transmitted sexually, as well as via mosquitos, and that babies born to infected mothers have a heightened risk of developing microcephaly and other potentially dangerous conditions. As a result, access to contraceptive and family planning services is a critical part of responding to the virus.

“UNFPA strongly urges governments and all other partners to provide information and access to voluntary family planning, including condoms,” says UNFPA Executive Director, Dr. Babatunde Osotimehin. “These services enable women to make informed decisions about their reproductive health, and all individuals to protect themselves from infection [with Zika virus].”

In February, shortly after reports of infection with Zika virus first surfaced in the country, Haiti’s Ministry of Health (MOH) released a Zika response plan that included increasing access to condoms and other forms of contraception as a cornerstone. 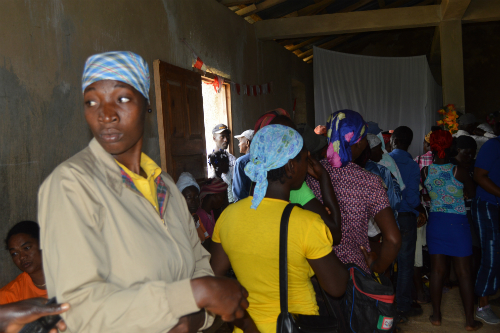 The challenge now is translating the plan into on-the-ground reality.

A scarcity of family planning

Haiti has long been the poorest country in the Americas, and the 2010 earthquake that killed 160,000 Haitians further decimated its already limited health infrastructure.

Currently, only 34 per cent of women of reproductive age have access to modern contraceptive methods, and as of 5 May, there had been 2,224 suspected cases of Zika virus – including 13 pregnant women – reported in Haiti. However, awareness around the virus remains limited, and many people do not have access to clinics, meaning actual rates may be much higher.

In addition, UNFPA is supplying condoms nationally, supporting health fairs in urban areas to increase access to and knowledge about family planning and supporting efforts to raise awareness about Zika virus and how to prevent it in Haiti and throughout the region.

In late April, the UNFPA-supported mobile clinic set up shop in Baie D’Orange for its sixth visit. It had last come to town in August 2015, eight months before, and the line to access its services began before the doors opened at dawn, and snaked down the dusty hillside where the clinic was perched until they closed at dusk. 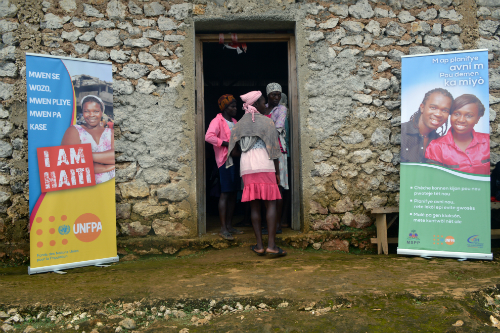 The building where the mobile clinic set up shop in April. © UNFPA Haiti

Rosenie Charles, who is unemployed and must support her nine children on the sporadic odd jobs her husband is able to find, was among those who visited the mobile clinic.

“I chose a five-year contraceptive method,” she says of the hormone implant she received, which can effectively prevent pregnancy for up to five years. “It is so I can support my children. If I find a charcoal bag, I will wear that, and give everything I have to my kids.”

A total of 251 men, women and children from Baie D’Orange visited the day-long clinic for services, and the health officials on staff also held packed group workshops to educate women and girls about family planning and sexual and reproductive health.

As the Ministry of Health’s Dr. Josette Sanon, who provided services at the clinic, said of the large turn out: “People are thirsty for this information.”