NOORDWIJK, The Netherlands — The ICPD International Conference on Human Rights began here on Sunday, with strong appeals to promote and protect the rights of every person, without any distinction.

The event is convened by the Dutch Government, UNFPA, the United Nations Population Fund, and the Office of the UN High Commissioner for Human Rights. Representatives from more than 130 countries are taking part in the conference, which is scheduled to last from 7 to 10 July.

The conference was opened by the Secretary-General of the Dutch Ministry of Foreign Affairs, Renée Jones-Bos. It also heard statements from the U.N. High Commissioner for Human Rights, Navi Pillay, who welcomed progress since the 1994 Cairo International Conference on Population and Development (ICPD), but emphasized the need to press on until the human rights of every person are protected and fulfilled.

Translating lessons learned into a roadmap for the future

“We have many voices in this room, they come with stories of despair and defiance. I invite them to speak up freely–an opportunity that is often denied them in their own households, communities and 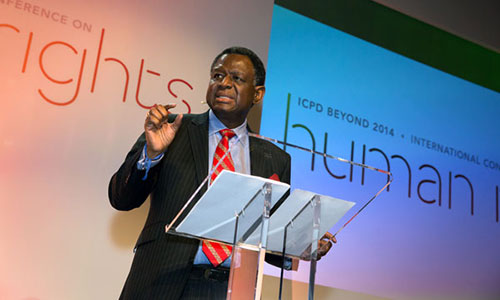 Dr. Osotimehin speaks at the opening of the ICPD Conference on Human Rights. Photo: Marcel Vogel

countries,” said UNFPA Executive Director, Dr. Babatunde Osotimehin, speaking on the opening day. “I urge all of us to listen to them attentively, to try to understand what it’s like to be systematically forgotten, to be left behind; when persistent and multiple discrimination gets in the way of accessing lifesaving services; when there is nowhere to go to be heard and claim your rights. These are stark realities for millions of people, particularly for women and girls in developing countries.”

Dr. Osotimehin recounted some of the gains made since the Cairo Conference: maternal death has nearly halved, access to family planning has increased in many countries and the ability to decide on the number and spacing of children are recognized as human rights. There has also been a remarkable increase in women’s participation in political, economic and cultural life, as well as a growing number of national institutions to address gender equality and women’s empowerment, he added. "Where treatment is accessible, HIV has changed from a death sentence to a chronic, manageable disease," he said, adding that about 9.7 million people accessed treatment last year.

The Executive Director also mentioned many of the challenges that remain. More than 60 countries still criminalize the transmission of HIV, access to sexual and reproductive health and reproductive rights is still far from universal, and some 222 million women in developing countries lack access to modern family planning.

“Too many women give birth too young, too often or with too little time between pregnancies to survive,” said Dr. Osotimehin. “Nearly 160 countries have implemented laws to increase the legal age of marriage to 18, but child marriage is still commonplace in many countries. If current trends continue, 142 million girls will be married in the next decade. Marriage usually deprives girls of their right to education.”

“Since Cairo,” Dr. Osotimehin continued, “over 30 countries have broadened the grounds under which women can access legal abortion and abolished laws criminalizing women for having abortions, but unsafe abortion still accounts for 13 per cent of maternal deaths every year,” adding, “this is entirely avoidable.”

In many places, the Executive Director said, women continue to be seen as second-class citizens. And girls’ potential continues to be squandered, despite the links between their education and economic growth. “These are not just human rights issues, they are also important development issues,” he added.

“The ICPD Beyond 2014 review is not about celebrating history, it’s about making it,” Dr. Osotimehin continued. “It’s about translating the lessons we have learned over the past 19 years into a roadmap for the future, and developing a credible framework for tracking future progress. This is essential not only for advancing the ICPD agenda, but also ensuring that the post-2015 agenda and the new international development framework speak to the needs and aspirations of people around the world”. 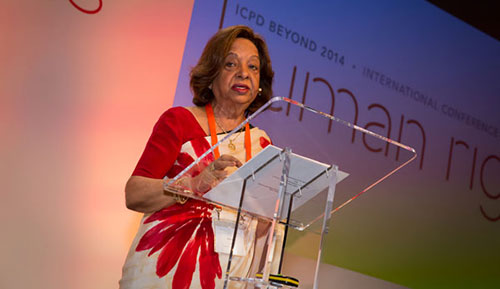 On Monday, UNFPA's former Executive Director and Secretary-General of the Cairo Conference, Dr. Nafis Sadik, gave a keynote speech that offered a historical overview and suggested ways ahead. She offered four suggestions on how to reach universal access to sexual and reproductive health.

First, Dr. Sadik said, “sexual and reproductive health programmes must move away from the maternal and child health delivery model. The problem is that they are oriented almost entirely to married women with children. If all women and men are to have access to the full ranges of services, programmes must reach out to them. The best way to do this is as part of an integrated health system, combining curative and preventive services, including maternal and child health.”

Second, Dr. Sadik continued, political will is required to plug the voluntary family planning gap in developing countries. “Meeting unmet need in the 69 poorest countries would have cost just over $2 billion in 2012. On Wall Street, that sort of money is a rounding error. Peanuts, really.”

Third, she said, “sexuality education in adolescence is the foundation of healthy sexuality in adult life,” adding, “countries and the international community must ensure not only that all children are educated, but that they are educated about their sexual and reproductive health and how to protect it.”

“Finally, men,” Dr. Sadik said, “We need influential men to lead their peers, encourage them to pick up their responsibilities, and become full partners in the fight for human rights.”

Her speech was followed by a standing ovation.

The current human rights conference is part of the UN General Assembly-mandated operational review of the Cairo Programme of Action. Participants include representatives of civil society and UN agencies, as well as experts and human rights defenders. They are expected to identify best practices in delivering ICPD goals and recommend how to address outstanding gaps in implementation and challenges.

A live webcast of plenary sessions is available at http://humanrights.icpdbeyond2014.org/join-us throughout the conference.