LUNDA NORTE PROVINCE, Angola – The March 2017 outbreak of violence in the Kasai region of the Democratic Republic of the Congo has displaced some 1.4 million people and forced over 35,000 others to flee to Lunda Norte Province, Angola. Roughly 75 per cent of refugees from Kasai in Angola are women and children.

Women and girls displaced by conflict face extraordinary hardships. Many endure grave risks, including gender-based violence, which can escalate in humanitarian settings. Most are thrust into poverty – cut off from education and life-saving health services.

Displacement exacts another huge toll on women and girls. In exile, their most intimate – and taboo – health needs are often overlooked, to devastating effect.

“I had my first period here at the settlement,” said Marie Anny, 13, whose family now lives in the Lóvua settlement, home to over 14,000 Congolese refugees. “I had no idea what was happening. For me, that day was sad and shameful.”

Stigmas surrounding menstruation have existed across cultures and history. And it’s not uncommon for women and girls to internalize these destructive myths.

A report published by UNFPA earlier this year details the extent to which period shame and misinformation reinforce gender discrimination, rendering women and girls vulnerable to poverty, violence and harmful practices.

From shame to dignity

Around the world, the idea that menstruating women and girls are unclean contributes to their exclusion not only from family life, but from education and employment. In some places, isolation and expulsion from the home can be dangerous, exposing women and girls to extreme weather and sexual violence. In others, the onset of menstruation is associated with child marriage, which heightens the risk of adolescent pregnancy and life-threatening complications before, during and after childbirth.

“When I’m menstruating, I usually use strips of absorbent cloth, but in the settlement it is difficult to get this cloth,” Marie Anny told UNFPA.

Harmful conditions in evacuation sites can wreak havoc on women’s sexual and reproductive health, while lack of access to hygiene supplies limits their mobility and heightens their vulnerability to sexual violence. Girls who do not have the ability to manage their menstrual health are also at greater risk of missing school or dropping out entirely.

Marie Anny is the recipient of one of over 8,000 UNFPA dignity kits distributed to women and girls in the Lóvua settlement. The kits contain essential hygiene items such as sanitary pads, underclothes, soap, toothbrushes and toothpaste.

UNFPA works with partners to deliver dignity kits to women and girls around the world – in schools and in women’s and girls' safe spaces. These safe spaces provide more than sexual and reproductive health services.

UNFPA-supported safe spaces also offer culturally sensitive counselling, legal support and vocational training to women and girls displaced by conflict, including victims of gender-based violence. Safe spaces can provide opportunities for women and girls to build their knowledge about other forms of sexual and reproductive health and rights as well, like HIV prevention and gender equality.

With more than 7,000 women and girls of reproductive age in the Lóvua settlement, unmet needs for sexual and reproductive health services are mounting.

For Marie Anny, the dignity kits help to keep her healthy, safe and confident.

“I take better care of my hygiene when I get the kit,” she added. 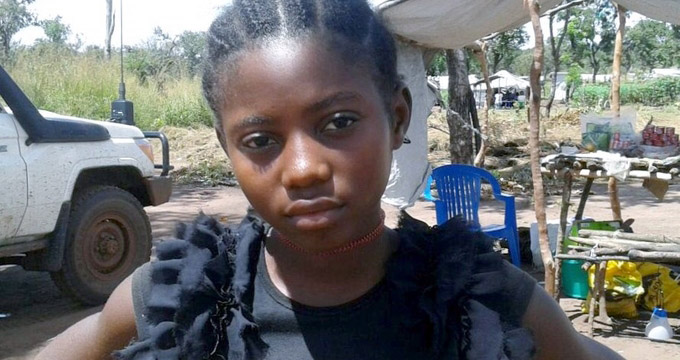 "What's in my bag?" with Natalia Vodianova