HODEIDAH, Yemen – Escalating violence in Hodeidah, Yemen, threatens the city’s estimated 90,000 pregnant women and girls, UNFPA has announced. Some 14,000 of these women and girls are likely to encounter pregnancy-related complications requiring emergency care, but access to health services has been severely limited by the ongoing crisis.

The only major referral hospital in the city, Al Thawra Hospital, was the site of a brutal attack last week. “I felt I was in hell because of what I saw,” said midwife Noha, who was working at the hospital’s obstetric ward when the attack took place on 2 August.

“That day, I was hearing gunshots since early morning. At 5pm, we heard a very loud explosion at the hospital gate. I ran to the scene to see what was happening,” she recounted.

The carnage was horrifying, she said. “I saw people screaming and crying with high voices. I went to help them, and there I saw a scene that was as scary as the Day of Judgment.”

Despite the attack, Al Thawra continues to operate, serving as a major obstetric and neonatal facility for the city. UNFPA is supplying the hospital with reproductive health medicines and materials, and is helping to establish an additional maternity ward and operating theatre there.

UNFPA is also providing supplies and support to midwives and gynaecologists across five districts in Hodeidah.

But fear and insecurity are keeping patients from seeking urgently needed care.

“This hospital is the largest in Hodeidah and was offering its services to thousands of patients,” Noha said. “Now pregnant women prefer to give birth at home, where they are exposed to many risks and problems. They do not come to the hospital out of fear of their lives.”

The humanitarian crisis in Yemen is one of the worst in the world, with 75 per cent of the population requiring some form of assistance and protection, according to the United Nations Humanitarian Coordinator in Yemen. The country is additionally grappling with a widespread cholera outbreak and the threat of famine.

Conditions for women and girls are particularly dire.

Yemen has one of the highest maternal mortality ratios in the region; in 2015 it was estimated that 385 women died of maternal causes out of every 100,000 live births. Today, the maternal death rate is likely to be significantly higher, as the conflict has cut off access to health services, medicines, food and livelihoods.

“Many women in areas close to clashes, such as Zabid and others, are unable to access health care, especially pregnant women,” Noha said. “More than that, the economic crisis and deteriorating conditions are adding to their suffering.”

UNFPA is scaling up efforts to support health facilities in Hodeidah, Aden, Ibb and Sana’a. But the situation in Hodeidah is particularly stark.

More than 70 per cent of all humanitarian assistance and food imports arrive through the city’s port, which is operating at limited capacity. The city is also badly affected by the cholera crisis.

The Al Thawra Hospital attack has alarmed humanitarian experts and officials. “Targeting medical facilities is strictly forbidden under humanitarian law, as it serves no purpose other than depriving people, in particular women and girls, from much needed life-saving services,” said Dr. Luay Shabaneh, UNFPA’s Director for the Arab Region.

But it is far from the first health facility to be affected by the conflict.

Only one third of Yemen’s reproductive health facilities are currently functional, with many clinics shuttered because of the violence, mass displacements, economic collapse, departure of health workers and lack of supplies.

Ahlam, 32, was unable to receive antenatal care throughout her pregnancy because the roads were disrupted.  When she went into labour a few days ago, she was afraid to leave the house.

“I stayed at home until I was very sick,” she told UNFPA. “My husband took me to an old clinic in Al-Marawa in Hodeidah. I lost a lot of money but they could not do anything for me because they lacked equipment and health workers.”

Finally, she was transferred to Al Thawra hospital on Monday. There, Noha saved her life, but it was too late for the baby.

“I lost my child,” Ahlam said. 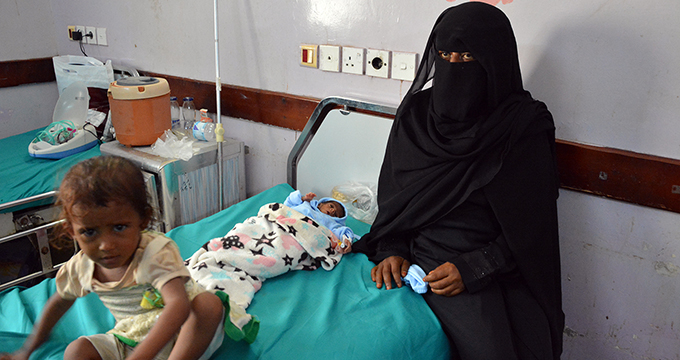