NIAMEY, Niger – When Fati was 12-years old, her father removed her from school in Niamey and sent her to Nigeria to marry a 40-year-old man. A year later, she was hospitalized with injuries inflicted by her new husband.

It took several months before she was well enough for discharge, and while she was still in the hospital recovering, her husband divorced her. By that time, she was the mother of a small boy.

Aichatou had to leave school at age 15 after she was forced to marry a 30-year-old man. At age 16, shortly after giving birth to her first child, she was widowed.

Finding themselves newly single, new mothers and not yet 18, both Fati and Aichatou went to live with family in the Talladjé area of Niamey, where they spent their days caring for their babies and doing housework – with few prospects for the future, other than more of the same.

Then two years ago, a knock on their doors changed both their lives. 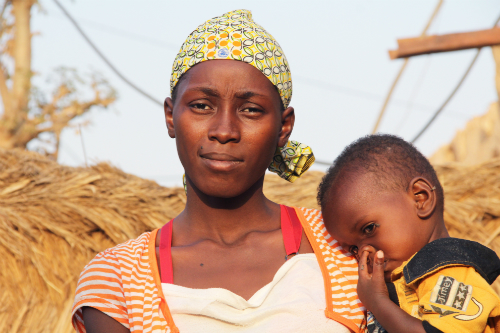 An outreach worker was going door to door to spread the word about the UNFPA-supported Safe Space programme Illimin, which had recently launched in their area, and to find girls ages 10 to 19 who were not enrolled in school to ask if they would like to join the programme.

Fati and Aichatou both said yes.

“By attending the Safe Space programme Illimin, I found the motivation to return to school,” says Fati, unable to suppress a large smile. “It helped me to gain confidence in myself. It has also re-awakened my lifelong dream to study and have a career. A dream that was shattered by my father.”

The price of denying girls an education

Fati’s and Aichatou’s stories of forced marriage are common in Niger – which, at 75 per cent, has the world’s highest rate of child marriage and, at 10 per cent, one of its lowest rates of girls enrolled in secondary school. This landlocked nation of 20 million is also one of the world’s poorest countries, and in 2014, ranked 188 out of 188 countries in the UN’s Human Development Index.

Investing in adolescent girls’ education and empowerment could prove key to strengthening the labour force and sparking economic growth in Niger – and in lower-income countries around the world. However, child brides and adolescent mothers are much less likely to attend school than other girls, meaning before countries can tap into the transformative potential of the 600 million adolescent girls on the planet today, they must reduce rates of both.

Illimin means “knowledge for dignity” in Hausa, a common language in Niger, and the Safe Space programme Illimin was designed to combat both early marriage and pregnancy by educating and empowering adolescent girls to facilitate this change themselves.

“It is at the Safe Space that my dream to go to school came back to me,” says Aichatou. “In this program, I was welcomed, re-motivated and guided towards resuming my studies.”

In secure spaces chosen in consultation with communities, Safe Space staff educates girls about sexual and reproductive health, self-esteem, their rights, money management, public speaking and literacy. In 2014 and 2015, over 10,000 girls completed the program.

Today, Safe Spaces have opened around the country, and 16,000 girls are scheduled to graduate this August alone. The programme plans to double that number for the class of 2017. 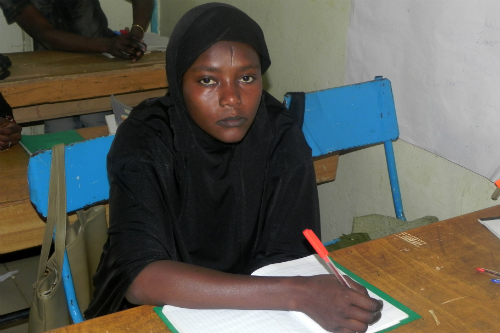 Fati is now enrolled in eleventh grade – and at the top of her class. © UNFPA Niger/Souleymane Saddi Maâzou

So far, at least 56 students have refused to marry men before age 18, despite pressure from their families, and credit the Safe Space with giving them the skills and confidence to negotiate the postponement. And many girls who were forced to drop out of school early are returning to class.

Fati and Aichatou were part of the inaugural 2014 class. Today, they are enrolled in eleventh grade at a second chance secondary school for students who previously dropped out – and are ranked near the top of their class.

Six days a week, they rise early to complete their homework and housework, then leave their sons with family, so they can spend the afternoon at school.

“These girls work well and are very involved in their education. I am sure they will succeed,” says Ibrahim Hassane, their French teacher.

After graduation, both girls plan to continue their studies. Fati hopes to enroll at the National School of Administration and Magistracy, and Aichatou dreams of becoming a journalist. Fati has also begun to campaign nationally – and internationally – to end child marriage, and has spoken at conferences in Zambia and Paris.

"I salute the determination of Fati and Aichatou," said Monique Clesca, the UNFPA representative in Niger. “It is the Fatis and Aichatous of Niger who will help the country achieve its demographic dividend, because they have education and will participate fully in the life of their country. Ultimately, that's the result of empowering girls."