Helping girls stay in the game

PORTLAND, Jamaica – “Find a trusted person to talk to about sexual and reproductive health issues, abuse and discrimination,” Sashauna Morgan told a group of young athletes at Titchfield High School, in Portland, Jamaica.

The girls, netball players, were being counselled to use the skills they had developed in sports – leadership, goal-setting and good judgment – to make responsible choices for their health and futures.

Netball is the most popular women’s sport in Jamaica; the country’s senior netballers, the Sunshine Girls, are ranked fourth in the world. The sport is widely played throughout the school system, making it a valuable avenue for reaching young people with messages about healthy decision-making.

UNFPA has partnered with Netball Jamaica, the sport’s governing body, to do exactly this. Through Health and You, a UNFPA-supported initiative, youth advisors like Ms. Morgan are visiting young netballers to teach them about sexual and reproductive health, human rights and the importance of staying in school. 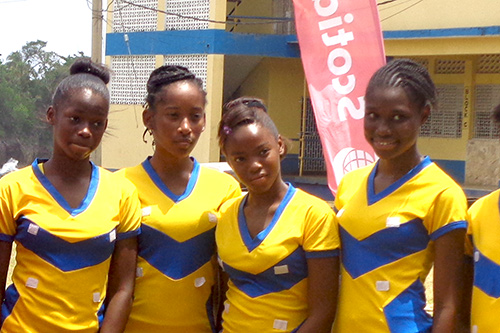 “Where possible, delay sexual initiation, as this can lead to unintended pregnancies and sexually transmitted infections, including HIV,” Ms. Morgan told the assembled youth. She also advised them to avoid drug use and to seek out leadership opportunities in their communities.

Adolescent pregnancy remains a major concern in the Caribbean. In Jamaica, about 72 girls give birth out of every 1,000 girls aged 15 to 19. Globally, this number is 50 per 1,000 girls.

A comprehensive study of adolescent health in the Caribbean showed that about a third of adolescents have sexual intercourse before age 19, and many become sexually active before age 12. Tragically, many young people reported that their first sexual experience was forced.

Health experts and youth advocates are exploring ways to improve young people’s access to sexual and reproductive health information and care, and to prevent gender-based violence. Girls who do get pregnant must be supported with proper health care and assistance to ensure they can return to school and fulfil their potential.

In Jamaica, one promising programme has been the creation of centres for adolescent girls and mothers, which provide counselling and training to at-risk girls and young mothers. A re-integration policy is also helping school-age mothers return to the classroom.

The Health and You initiative aims to reach young people even earlier – providing them with the support and information they need to stay healthy and safe so they can pursue their dreams.

“When I started playing netball, I was always committing contact infringements, and I realize now that this was because I had anger problems,” said Glacia Martin, a Titchfield High School student who aspires to one day become captain of the Sunshine Girls. “Now I don’t get called for contact as much anymore, so netball helped me to be patient and to work as part of a team.”

It is important to show young people how these lessons can be applied to the rest of their lives, said Marva Bernard, the president of Netball Jamaica: “Engagement in sport helps the girls to understand and implement the concept of setting personal goals and working to achieve them, as well as builds their capacity to work in teams. These are important life lessons that transcend sport.”

“We are very happy for this partnership with Netball Jamaica that allows us to intervene at this early stage,” said Sheila Roseau, the director of UNFPA’s office in the Caribbean. “Hopefully, we can intercept and prevent many chronic conditions that could result from poor health and lifestyle choices.”