UNITED NATIONS, New York – On Monday, 21 July, the home and maternal health clinic of Feeza Shraim, a UNFPA-supported midwife in the Gaza Strip, were destroyed in an airstrike.

Ms. Shraim – who has worked with UNFPA as a midwife, trainer and advocate since 2004 – had been operating the clinic out of her home. Since the start of the crisis, she had assisted about 30 pregnant women.

No patients were in the facility at the time, though Ms. Shraim and 14 members of her family were at home. They are now staying with friends in Gaza City.

Ms. Shraim established her clinic in part to provide maternal care to women in times of conflict, when health services often become inaccessible. “There were a lot of bombardments in Beit Hanoun,” she said in an interview in 2010. “There were no delivery homes or delivery clinics… During each incursion, I delivered 30 to 40 cases.” 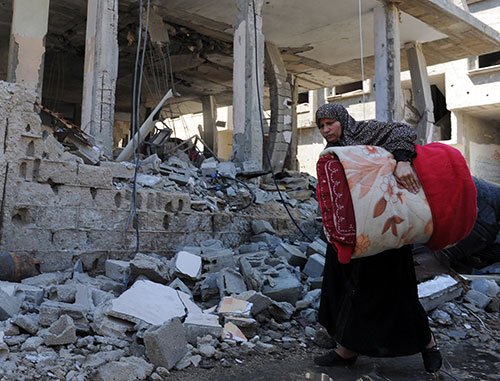 A woman carries her belongings past the ruins of a building in Gaza, on 17 July 2014. Photo credit: UN Photo/Shareef Sarhan

During the 2008-2009 assault on Gaza, her clinic offered both medical and psychological services, and delivered more than 50 babies. Ms. Shraim was named a Friends of UNFPA International Honoree for the Health and Dignity of Women and Girls, in recognition of the life-saving care she provided during that crisis.

The destruction of Ms. Sharim’s clinic only exacerbates the enormous and rapidly growing need for maternal and reproductive health services in Gaza.

Over 140,000 people have been displaced by the hostilities, according to the most recent figures from the UN Office for the Coordination of Humanitarian Affairs. UNFPA estimates that, among those displaced, there are 25,000 women of reproductive age and 5,000 pregnant women.

Other health facilities have also sustained damage. On 21 July, the Al Aqsa Martyrs Hospital in Deir El-Balah was hit in an airstrike, resulting in a major disruption of services, including maternal and reproductive health care.

Despite the significant constraints of operating during the ongoing hostilities, UNFPA is working with partners to provide essential assistance and supplies to those in need.

UNFPA is procuring urgently needed drugs, supplies and equipment, and is developing a strategy to map the locations of pregnant women and health professionals in Gaza to strengthen community-based maternal health services.

UNFPA is also putting together dignity kits containing hygiene supplies and other items to distribute to affected families.

Working with Y-Peer, a network of young leaders, and others, UNFPA is supporting psychosocial outreach efforts. However, these activities are currently limited due to the security situation. A more robust programme can commence only after the hostilities cease.