PORT-AU-PRINCE, Haiti – Midwife Amoin Soulemane is running late for her appointment. With the consent of her patient, a 48-year-old woman, Ms. Soulemane quickly ushers her guests into the consultation. They will be observing a cervical cancer screening.

“It takes no more than a few minutes to carry out the whole test,” she said. Ms. Soulemane, a United Nations Volunteer from Côte d’Ivoire, relaxes the woman by carefully explaining how she will proceed.

The test is brief and painless, she said. It is also inexpensive and life-saving. 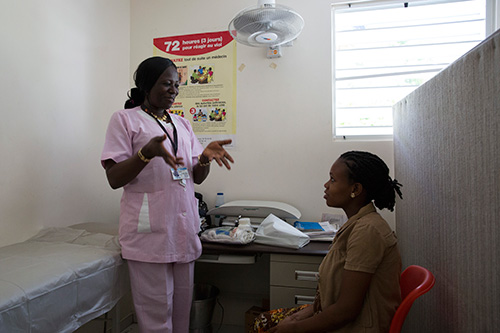 Amoin Soulemane, a midwife from Côte d'Ivoire, with a woman at the clinic. Ms. Soulemane says her of work, "It's my calling, as a woman, to help other women." © Jared Chambers

Yet all too often, cervical cancer goes undiagnosed.

A disease of inequality

Cervical cancer is one of the most common cancers to strike Haitian women, according to the World Health Organization (WHO), and it is often fatal. A 2014 WHO document shows that out of 3,100 women killed by cancer in Haiti, nearly one fifth died of cervical cancer.

By contrast, in countries like Canada, France and the United Kingdom, cervical cancer is nowhere near the most common cancer. This is because early detection and treatment can prevent precancerous lesions from growing – something that requires trained staff and regular check-ups.

Vaccines to prevent human papillomavirus (HPV), the main cause of cervical cancer, are also available in more affluent countries.

“Cervical cancer is a disease of great inequities that mainly affects the most vulnerable groups of women,” said Dr. Macarena Pérez Castells in a report of the Pan American Health Organization. “Mortality rates are seven times higher in [Latin America and the Caribbean] compared to North America, and the gap is projected to widen even further by 2025.”

In Haiti, which has limited health infrastructure and widespread poverty, the disease often goes undetected until it is too late.

"No structured screening program is in place so when women come for a diagnosis, it’s already too late,” said Dr. Jean Ronald Cornély, a cancer expert with the Ministry of Health. "Besides, we lack modern methods of treatment to respond to the needs of the population.”

But there is a test available to countries lacking resources, and it could not be simpler. Ms. Soulemane is surprised it is not automatically performed on all women of a certain age.

She applies a solution of acetic acid – white vinegar and water – to her patient’s cervix, and then looks with her naked eye to see if any tissue has turned white, which would indicate an abnormality. 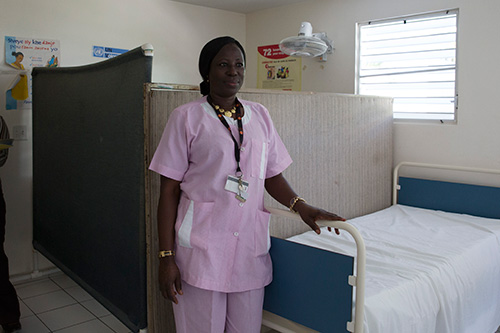 Ms. Soulemaneis surprised that cervical cancer screenings, which are easy, fast and inexpensive, are not standard. © Jared Chambers

She gives the woman a clean bill of health, then urges her to return in a year for another screening.

“Had there been the slightest trace of a cancerous lesion, I would have referred her to a specialized centre,” Ms. Soulemane later said.

This test, called visual inspection with acetic acid, is commonly performed her clinic, in the Petite Place Cazeau neighbourhood of Port-au-Prince. It is one of four UNFPA-supported clinics providing free obstetric and newborn care, where mothers are routinely screened for early signs of cervical cancer.

Women who test positive for abnormal tissue are referred to further care – usually treatment with a cryotherapy device, which freezes cancerous or precancerous lesions.

In 2011, the Ministry of Public Health launched a pilot project, with the support of UNFPA and WHO, to increase these visual cancer screenings.

As part of this pilot, UNFPA expanded the availability of visual screenings and treatment. It has trained nurses and midwives to perform these screenings, and has also provided cryotherapy devices to health facilities.

Since the launch of the pilot, “100 providers have been trained throughout the country,” said Dr. Reynold Grand’Pierre, head of the Family Health Directorate.

Cryotherapy devices have also been installed in at least nine hospitals.