GABU, Guinea-Bissau — A year ago, UNFPA Goodwill Ambassador Catarina Furtado laid the first brick for the construction of a maternity surgical unit in this dusty town in eastern Guinea-Bissau.

This month, she attended the inauguration for the unit that her efforts had helped establish at the Gabú Regional Hospital. Opening of the surgical unit is part of a larger project to support emergency obstetric care in the areas of Oio and Gabú, with the financial support of UNFPA, the Government of Portugal and the Radio Portuguese Television.

During the inauguration ceremony, on 4 June, Ms. Furtado highlighted the importance of the project for the reduction of maternal death, saying that “saving a woman’s life is like saving a whole family’s life.” She also stressed the critical role that surgical units play in the different regions, in addition to the need for vehicles to evacuate women suffering from obstetric complications. 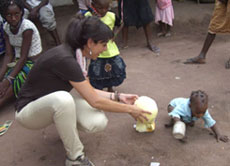 The ceremony was attended by Mr. Camilo Simoes Pereira, Minister for Public Health; Mrs. Fatima Fati, Minister for Woman, Family, Social Cohesion and the Fight against Poverty; the Resident Coordinator of the UN System, Mrs. Giuseppina Mazza; Mr. Guy de Araujo, UNFPA Representative; and the Ambassador of Portugal in Guinea-Bissau, Dr. Antonio Manuel Ricoca Freire, in addition to a number of doctors and other dignitaries.

Ms. Furtado’s trip included a tour of the maternity surgical unit of a hospital in Mansoa that also was funded by the project. The unit was inaugurated on 25 May 2009 and began offering treatment that same month. Ms. Furtado spoke with the staff who expressed revitalized engagement and motivation in the efforts to reduce maternal deaths. The hospital boasts a qualified technician’s team, regular operation of the maternity surgical unit, ambulance services, Caesarean kits and, most, importantly, the testimonies of women whose lives were saved by the new centre.

Ms. Furtado was accompanied on her trip by the production team of the television programme “Até O fim do Mundo” (To the Ends of the Earth), which is producing four episodes bout maternal health called “Dar vida sem morrer” (Maternity without risk). The series is intended to raise public awareness and mobilize funds for the reduction of maternal mortality in the country.

Ms. Furtado ventured out from the hospitals and surgical centres to meet with people from the rural communities. Near Gabú, she discussed abandoning the practice of female genital mutilation/cutting. She also spoke with people on the outskirts of Mansoa about the critical value of quickly getting women in labour to a hospital for delivery. The residents have solved this dilemma by using specially outfitted bicycles. This system, supported by the UNFPA, counteracts concerns of high costs of transport and access to emergency drugs for women in labour.