Girls are saying no to FGM – and they need political champions

UNITED NATIONS, New York – “When I was young, I did not want to be cut,” said Aissata Camara, speaking at the High-Level Panel on Female Genital Mutilation, held during the 73rd Session of the United Nations General Assembly.

“I am one of those 200 million girls who have been cut,” said the Guinean-American activist and co-founder of the There Is No Limit Foundation. “I am here to speak for the 68 million that are now at risk.”

Female genital mutilation (FGM) is routinely practised in 25 countries. In 2015, an estimated 3.9 million girls were cut.

A practice that involves altering or injuring the female genitalia for non-medical reasons, FGM is an extreme violation of the rights of women and girls. Survivors often live with health problems including pain, infections, infertility, anxiety and depression. They are more susceptible to HIV infection, and risk serious complications when giving birth.

Many countries have made strides in curbing the practice. A girl’s chances of being cut are now one-third lower than 30 years ago.

But unless rates of FGM fall faster, the number of girls subjected to it will increase as populations grow – with a projected 4.6 million girls cut in 2030.

It takes a whole society to end FGM and protect girls. The UNFPA-UNICEF Joint Programme to Eliminate FGM, the largest global programme to accelerate the abandonment of the practice, works with legislators and ministries; police, teachers and social workers; religious and community leaders; and families, including girls themselves.

The Joint Programme works to provide girls and women with access to FGM-related protection and care services. It supports countries in enacting laws and policies to ban the practice, and setting up coordination mechanisms and budget lines to operate and fund the programmes that address it.

Because ending FGM requires changing the social norms that uphold it, the Joint Programme engages communities through education, dialogue and consensus-building, with an emphasis on gender equality and human rights. 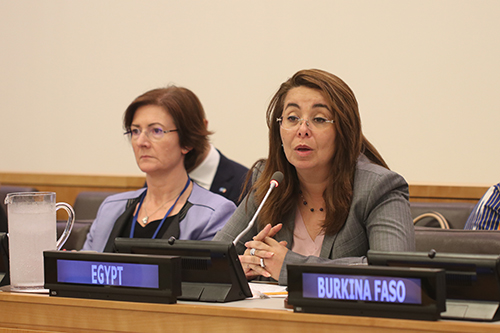 “Consider it a violent crime against women,” said Dr. Ghada Waly, Egyptian Minister of Social Solidarity, calling for social dialogue about FGM, as well as stronger enforcement of laws that hold those who perform FGM to account. © UNFPA/Usenabasi Esiet

Budgets, policies, laws and services are necessary, noted Dr. Ghada Waly, Egyptian Minister of Social Solidarity during the panel, but they are not enough to end FGM. In Egypt, where 92 per cent of women have undergone the practice, it continues despite a national ban. “Culture has proven to be stronger in many cases than the rule of law,” she said.

Where parents and grandparents continue to push for FGM out of a belief that they are doing what is right for their daughters and granddaughters – because society demands it – the work of changing minds starts with dialogue about the ways FGM hurts girls and women, physically and psychologically, for a lifetime.

“We all want the best for our children,” she said. “We have to say it very loudly.” 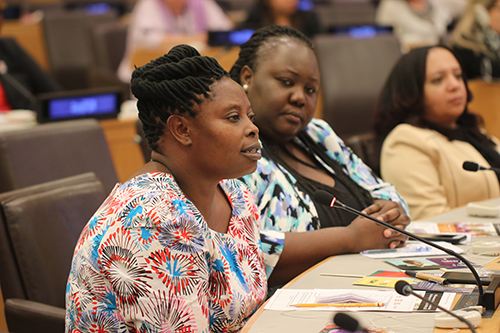 Rhobi Samwelly (left) nearly died when she was cut at age 15. Afterwards, she made her parents promise not to cut her younger sisters – and then dedicated her life to protecting other girls from FGM. © UNFPA/Usenabasi Esiet

“This is a battle we can win”

Girls themselves are far ahead of everyone else.

In countries where FGM is prevalent, girls like 14-year-old Latifatou Compaoré, whose song ‘Excision’ reached hundreds of thousands in Burkina Faso and beyond, are already raising their voices against FGM.

They have found strong support at the grass roots, through the tireless work of activists like Rhobi Samwelly, a survivor who herself spoke at the panel. Ms. Samwelly now runs a safe house for girls at risk of FGM in Tanzania, and works with police and social workers to convince parents to respect their daughters’ wishes not to be cut.

“We’ve seen what a difference champions of change make at the community level,” said UNFPA Executive Director Dr. Natalia Kanem. “It is time to take this form of advocacy to next level in the political sphere.” 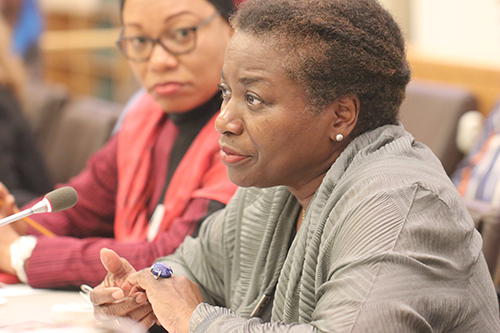 “The social norm that supports the practice of FGM in some 30 countries around the world rests on the flimsiest of foundations: faulty beliefs, lack of evidence, inferred obligations, perceived expectations,” said UNFPA Executive Director Dr. Natalia Kanem. “They all have been woven together in a surprisingly durable knot – that can be untied.” © UNFPA/Usenabasi Esiet

Ms. Camara is doing exactly that. She called on Governments to live up to the commitments made in Sustainable Development Goal Target 5.3, calling for an end to all harmful practices.

With sufficient political support, she emphasized, it’s a winnable fight. “Because the girls affected by the issue are already saying ‘no’,” she said. “They are ready to fight. They are ready to reclaim their bodies, but they need you. They need all of us.”

“I don’t want to come here in 2030 to talk about how we have missed our targets,” she said.