Getting More Health for the Money: Burkina Faso Tries Outsourcing

The predominantly rural country of Burkina Faso has initiated an innovative approach to community-based distribution of condoms and contraceptives, as well as health information, in a project spearheaded by UNFPA and involving a wide range of partners, from volunteer health workers and community-based organizations to government ministries. And it’s showing results: Contraceptive prevalence in the country has increased by 5.2 per cent in just the past two years.

SABLOGO, Burkina Faso — Although Solange Lamoussa Sawadogo has no medical training, the 28-year-old mother of two is fondly called 'loctoré' – doctor in English – in her village 200 kilometres east of Ouagadougou, the capital.

With the nearest health centre in Moaga, eight kilometres away, Solange, a volunteer Community Health Worker, promotes reproductive health, encourages couples to get family planning counselling – something rather new in this traditional community – and dispenses condoms and some contraceptives. Well respected by both the men and women of Sablogo, she seizes every opportunity to talk to people wherever she finds them – by the well, on the farm, in the market place, at places of worship, and attending village events.

After going to the Health and Social Promotion Centre in Moaga, women can buy contraceptive supplies from Solange, upon presentation of the booklet given them by a health worker, to whom they must return on a quarterly basis for a check-up. 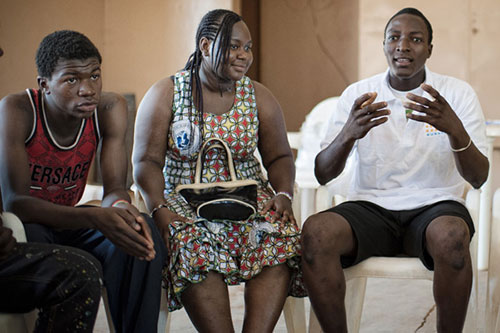 Although Solange is not paid a salary, she is able to earn a stipend based on how much she sells. In a period of six months, she sold 47 packs of pills at 20 cents each and 91 packets of condoms (containing three condoms each) at 10 cents per packet. She restocks her supply of contraceptives at the health centre depot, which is, in turn, supplied by the Health District Distribution Depot. Her need for contraceptives is assessed and included into the health centre's requirements.

"Here, women are willing to use contraceptive pills," says Solange. Some are also starting to use longer-acting injectables, such as Norplant, but an increasing number prefer pills, she says.

With her efforts on all fronts related to the health of mothers and children, Solange has plenty to keep her busy. She also makes it a point to encourage men to take an active role in their wives' pregnancies, including by going with them to the clinic for antenatal consultations. And she is getting results: In this village, about 20 men have already accompanied their pregnant wives at least once to the Moaga health clinic, something virtually unheard of in the past.

Getting fathers on board for birth spacing

Jean-Baptiste Sawadogo reflects the changing attitudes in the community. Sitting in the middle of his compound, which is made up of three thatched huts, this 36-year-old farmer spoke about the importance of birth space, while Mariam, his 26-year-old wife sat beside him, appearing somewhat embarrassed.

But Jean-Baptiste is proud to tell the visitor that he buys contraceptive pills for his wife, who is nursing a child of one and a half years old. He related that two months after the birth of their second daughter, he took his wife to clinic so they could prescribe a contraceptive method.

After trying a three-month injectable, they settled on contraceptive pills, which Solange supplies. “I personally make sure she does not forget to take the pill on a daily basis," said Jean-Baptiste. “Our second daughter will not have a younger brother until the time when she is able to say to me, 'Daddy, get me a toy from the market'. I now have two daughters and if I get a boy next, I'll perhaps stop there."

Solange's activities are just one part of a delivery system called Community-Based Services, which is implemented by several organizations. For instance, in the Tenkodogo Health District, the Association for Functional Rehabilitation works with 10 facilitators and 33 volunteer community health workers like Solange.

Creating a 'social map' of the village 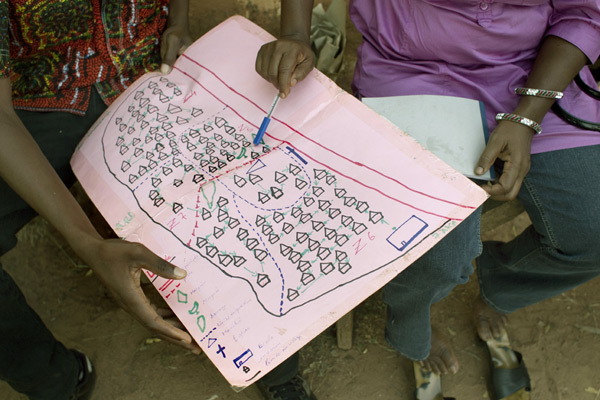 The group collaborates on a map on to clearly identify the social needs of the community. Photo: Jérôme Sessini / Magnum Photos

Solange collaborates with members of the community to create a 'social map' of the village, using an identification number for each household (each compound comprises one, two or three huts). On the back of the map the name of the household head is written against each identification number. Once this is done, the map is validated at a general meeting attended by all community members. Any mistakes (forgotten features, inaccurate information, etc.) are corrected. With this tool, the facilitator collects data from compound to compound with the assistance of the community health worker and compiles the data in a register.

Identifying specific needs in the village

Ultimately, the social map will identify a list of women of childbearing age, pregnant women and nursing mothers, children (age five and younger), and the specific needs of each target group in each compound. It is a tool for planning, implementation, monitoring and evaluation, based on the social structure of the village. Once the needs assessment is complete the health centre and the community plan their activities.

The facilitator holds a public awareness raising meeting at least once a month with women, men and children. Because some women are reluctant to talk about their reproductive health issues in such a gathering, the facilitator holds individual interviews on a more regular basis.

In these private conversations, women can speak freely about their concerns relating to family planning. Generally speaking, the facilitator provides specific advice to the community health workers and follows up to ensure that the ideas are implemented within the community. 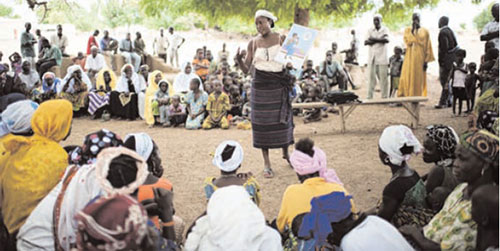 Although the facilitators are considered to be volunteers, they do receive a token allowance for facilitating the community meetings. Solange is grateful for the allowance, but would appreciate other kinds of support: "I do this work because I love it," she said. “But I think they can further support us by providing us with a mobile phone and a bicycle, for example, because the compounds are far from each other."

In the Moaga health centre, which serves six villages and a population of over 7,000 people, implementing community-based delivery of services was not an easy undertaking. The Health Post Chief, Mr. Eloi Tindewendé Kaboré, admits he was skeptical at first. He thought the approach would fail, as most of the community health workers are illiterate and the Pill was a new concept, but welcomes its achievements.

"In some villages, community-based delivery is a real success story," he said. “It enabled us to raise awareness and bring the Pill and condoms closer to the users. Health personnel were greatly relieved." 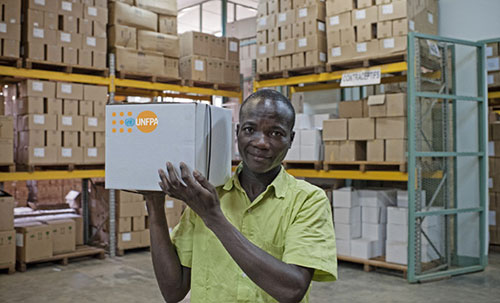 Moreover, clients are doing a better job of keeping their antenatal care appoints, according to Adissa Bancé, the auxiliary midwife of Moaga health centre.

"Before, women did not keep appointments for antenatal consultations. They would come just two months before delivery. Now, all appointments are kept and after delivery, the women come again for consultations with their newborn babies. We now see 400 to 500 children per month," she said.

And over a period of two months, 53 men accompanied their spouses to the health centre for consultations. "They do not come and stay under the trees, but instead take part in the consultation, and the diagnosis is made in their presence," says the Assistant District Medical Officer of Tenkodogo Health District, Dr. Adama Diallo.

Outsourcing is good for health

The success of community-based distribution in Burkina Faso is largely due to outsourcing, a strategy for 'getting things done' that started in 2008. The Government, through the Ministry of Health, works with a number of actors to support health promotion, preventative care and treatment activities in the health sector.

Community-based distribution has contributed significantly to improving contraceptive prevalence by increasing access to and the use of reproductive health services, including for those living in remote areas and for marginalized groups. Nationwide, contraceptive prevalence is increasing sharply – up 10.8 per cent between 1993 and 2011. The latest study commissioned by UNFPA shows an increase of 5.2 per cent between 2010 and 2012 alone.

This approach shows that the health of the population is no longer the concern of the government alone. Synergy has been built between the various actors. "Contracting is a tool to improve health systems by involving communities. It helps maintain lasting relationships with stakeholders," says the Ministry's Director of Maternal and Child Health, Dr. Djeneba Sanou. The implementation of community-based distribution was initiated in the context of broad-based collaboration between the Government, civil society and communities, with technical and financial support from UNFPA.

The objective of this strategy is to reduce the unmet need by making available the contraceptive methods that are not subject to prescription living in remote areas. In 2012, 38 per cent of the 3,213 villages covered by community workers were located more than 10 kilometres away from a health centre.

In 2012, UNFPA commissioned a survey in collaboration with the Burkina Faso Ministry of Health and the Afrisanté Research Institute. It reveals that much has been accomplished.

Impact on Contraceptive Prevalence
5.2% increase in contraceptive prevalence between 2010 and 2012

UNFPA has been closely involved in the outsourcing strategy and plays a leading role in its implementation. The Fund also provides financial and technical support and plays a key role in securing contraceptive commodities. "We are supporting the Government's efforts to improve maternal health and universal access to reproductive health. On average, we pay $5 million per year to facilitate access to family planning services. Burkina is one of the main beneficiaries of the Global Reproductive Health Product Security Program," said Dr. Mamadou Kante, UNFPA Representative in Burkina Faso.

The Ministry's Director of Maternal and Child believes that the new emphasis on family planning has helped to reduce maternal mortality ratio in the country by 30 per cent, bringing it down to 341 per 100,000 live births (Demographic and Health Survey, 2010).

All stakeholders recognize the results so far but agree that there are still many challenges to address, including mobilization of financial resources to support the extension of community-based distribution to all villages and all areas of the country, providing financial incentives to implementing partners, and the management of contraceptives and their availability in the villages.

Getting More Health for the Money: Burkina Faso Tries Outsourcing