“Every hour of every day in DRC, four women die from complications of pregnancy and labour, and for every woman who dies, between 20 and 30 have serious complications, such as obstetric fistula, which is very common in DRC,” said Richard Dackam Ngacthou, country representative of UNFPA, the United Nations Population Fund. For every 100,000 live births 1,100 women die, he said.

But to meet a national target of reducing the number of women who die in childbirth by 75 per cent and to provide all Congolese with access to contraception – in line with the Millennium Development Goals – new funding targets must be achieved. 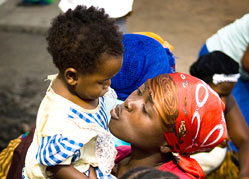 Nearly half of Congolese women have a child by age 19. Photo: Aubrey Graham/IRIN

The funding gap is severe: in 2008 some $5 million went towards the fight against maternal mortality, whereas in 2009 less than $2 million was allocated. Congo’s 2010 budgetary situation is no less dire, with only around $6 million planned to finance the entire health sector, where some $60 million would be warranted, according to a member of parliament.

“The Congolese government and its partners have developed a battle-plan, which clearly maps out the steps needed to be taken to reduce maternal mortality and is backed by a national strategy to obtain reproduction and family planning materials,” said Kossi Ayigan, health sector coordinator for the World Health Organization (WHO). “All we need is the funding to put this process in place.”

Beyond the funding shortfalls, however, DRC has to overcome ignorance about family planning, contraception and reproductive health. Few Congolese men have been co-opted into the global campaign to increase the use of condoms, and child marriage remains common, particularly in the eastern part of the country.

Nearly half of Congolese women have a child by age 19, Marie-Claure Mbuyi Kabulepa, reproductive health coordinator for WHO in DRC, told IRIN – the first of an average 6.2 children born to each of the country’s nearly 35 million women, according to population figures from the CIA Factbook.

Women become pregnant too soon and continue having children for too long; they deliver prematurely or beyond gestational age; and they have too many children spaced too close together, said Mbuyi Kabulepa. Worse still, just 6 per cent use contraception – compared with 15 percent in 1985.

For all these challenges, health advocates suggest the number-one solution is a stronger, better-resourced national healthcare system that responds proactively to women before complications occur. Ante-natal healthcare begins with family planning, said UNFPA’s Joséphine Bora, and continues with regular obstetric care. Reproductive health must be a component of health education, standardized across the national school system, targeting adolescents.

This can also help to reduce unwanted pregnancies; of the more than three million births recorded in 2009, it is estimated that nearly half were unwanted. In addition, there are tens or even hundreds of thousands of clandestine abortions, which also lead to death or complications that can include sterility.

The impetus would appear to be there, even if it has yet to be financially supported. At the end of the December 2009 national conference on the repositioning of family planning, First Lady Marie-Olive Lembe Kabila termed it “inadmissible [that] women continue to die as they are giving life”.