KURDISTAN, Iraq – Intisar* was only 15 years old when her parents forced her into a marriage. She described it as an act of commerce: They sold her to another family to pay off a debt. “It is the worst feeling in the world to be traded off like that by the people who are supposed to protect you,” said the now-37-year-old Intisar, during a recent interview.

Her husband was 25 years her senior, and immediately abusive. He never missed an opportunity to remind her that she was "just a bargaining chip," she said.

"He mistreated me for 22 years, and I never dared say a word. He would physically hurt me, beat me for any reason, insult me using the most disrespectful words. I remember one night, he kept hitting me with a cane, screaming at me ‘You are a nobody – I own you. You are worthless.’ I cried every night for 16 years,” she recalled.

Punished for having girls

To make matters worse, Intisar became pregnant three times, and each time she delivered a girl.

Preference for sons is widespread in her community, with daughters often considered a burden while sons are considered a sign of their father’s virility and potential wage earners for the household.

“Giving birth to girls was apparently my ultimate sin. He kept accusing me of being a failure of a woman and would even starve me for a week after I give birth,” she said.

But in the end, it was her daughters who gave her the strength to leave. After years of watching their mother suffer, they intervened.

“My daughters came to me one day and begged me to leave their father. They said they appreciate the sacrifice I did for them but they can’t bear see me in these conditions.”

She thought a lot about what becoming a divorced woman would entail – from the difficult legal process of securing her independence to facing the stigma and possible harassment that can come with being divorced. Starting all over again scared her but she knew that staying was no longer an option.

Her daughters also showed her the path forward.

“It was my daughters who told me about the women’s centre,” she explained, referring to a support facility for women and girls, supported by UNFPA with funding from Norway. “They told me that I should not be embarking this new journey without the proper support and that the only way to move forward with my life is to seek professional advice and be surrounded by women who have similar stories,” Intisar said.

The centre provides a safe space for women and girls to share their fears, hopes and experiences. It also offers counselling, referrals to health and social services, and case management for survivors of violence, as well as referrals to legal services provided by nearby non-governmental organizations.

It serves roughly 20 to 25 survivors of gender-based violence each month.

Today, Intisar lives with her daughters and is in the middle of the process of obtaining a divorce.

She has been attending activities at the women’s centre for three months, and is receiving psychosocial support there. “I’ve met with the social worker eight times, and she gave me great advice. She made me feel that I deserve a second chance in life,” Intisar said.

She also has a new support network.

“At the centre, I made friends: women who, just like me, are fighting their battles every day. They, too, are survivors of domestic violence. I feel they understand my pain. The centre has become my home and these women have become my family.”

Overall, Intisar is on the road to recovery.

“I am proud of the scars I have on my body. I am proud of having taken a decision to start over again, to forget a heart-breaking past and the pain I carried for years,” she said. “I now know how worthy I am of a decent and happy life.” 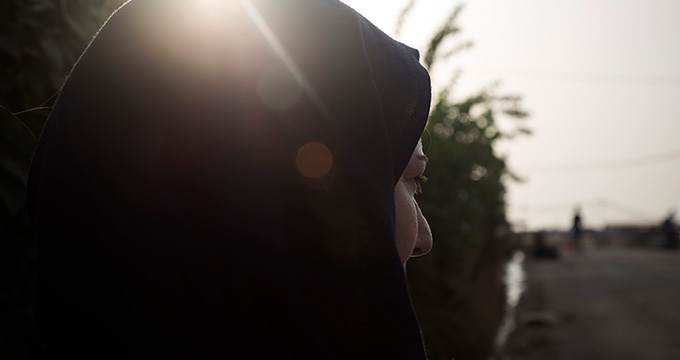