A First Birthday Far Away from Home

CYBER CITY, Jordan — Giggling, playing and uttering his first words "mama" and "papa", Abdullah just turned one. Born as a Syrian refugee in Jordan last year, his parents had hoped to return to their homeland a few months after his birth, but they just spent Abdullah’s first birthday in the Cyber City Complex refugee camp.

Abdullah, along with many other Syrian children, was born in Cyber City after his parents were forced to flee their homes in Syria, looking for refuge and security in Jordan.

When she fled her home more than a year ago, Rawdah Shalabi was seven month pregnant. It was not easy walking for hours amidst the shelling, while also carrying her three-year old son, she recalls.

When she first arrived in the Cyber City, Rawdah's first question was about the availability of a women’s clinic at the shelter. And thanks to the UNFPA-supported programme in the camp, there was one.

On 4 September 2012, Rawdah gave birth to a baby boy and named him Abdullah, after the King of Jordan, as a token of appreciation for the Kingdom’s hospitality.

At that time, she did not expect that the unrest in Syria would last more than a few months.

” I wanted my Abdullah to be brought up in our country,” she said. “But when things became more complicated in my hometown, I had to cope with life here.”

“My Abdullah is one year old. Thank God, although we are in a shelter, his health is very good and I bring him from time to time to the clinic,” she said, referring to the Jordan Health Aid Society UNFPA-supported clinic in Cyber City.

“I used to come to this clinic for medical checkups when I was pregnant, and after delivery they took good care of me and the baby,” Rawdah explained. “Whenever I need counseling, checkup and support, I come here.”

Nisreen, also a Syrian refugee and mother of three, is accompanying Rawdah on this visit. The 30-year old mother is holding her own baby, Mohammad, who is almost the same age as Abdullah.

Nisreen also gave birth to Mohammad in Jordan on 1 October, 2012. He just turned one. 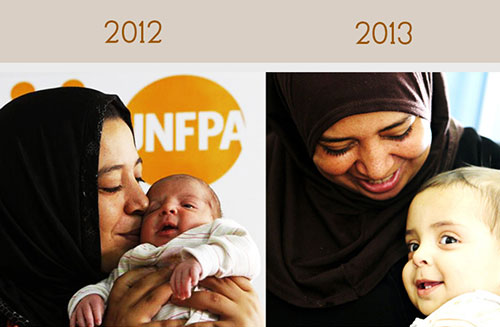 His birth breathed life back to me and his father, although we were afraid that our first baby boy was going to be brought up as a refugee,” said Nisreen, pictured above with baby Mohammad. Photos: ©UNFPA and ©Ra’d Adayleh

The availability of good healthcare in the camp encouraged the parents to come to the clinic regularly.

“The midwives here explained the importance of family planning and advised me on using the appropriate method,” said Nisreen.

Since she gave birth to Mohammad, she visits the UNFPA-supported clinic every month for a medical checkup.

“Mohammad also got all the required vaccinations here,” she noted, adding that medics at the clinic also advise her on what to feed her baby since he started taking food other than milk.

“I am not worried after having a good experience here. I will lead a normal life here, without fear. The current situation in Syria might continue for a long time.”

The clinic in the Cyber City complex is funded by The European Commission's Humanitarian Aid and Civil Protection department (ECHO).

Find out more about the "Safe birth. Even Here" campaign: