“Women’s bodies have become a battleground over which opposing forces struggle,” says a new report about women in conflict. “Women are kidnapped and used as sexual slaves to service troops, as well as to cook for them and carry their loads from camp to camp. They are purposefully infected with HIV/AIDS, a slow, painful murder.” 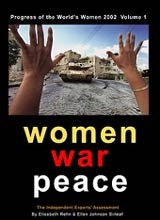 “Women, War and Peace: The Independent Experts’ Assessment on the Impact of Armed Conflict on Women and Women’s Role in Peace-building - By Elisabeth Rehn & Ellen Johnson Sirleaf”

Commissioned by the United Nations Development Fund for Women (UNIFEM), the Progress of the World's Women 2002, Volume 1 report, entitled ’’Women, War, Peace: The Independent Experts Assessment on the Impact of Armed Conflict on Women and Womens Role in Peace-building, examines the progress made in implementing the United Nations Security Council Resolution 1325 dealing with women, peace and security. Adopted unanimously in October 2000, the resolution calls for the special needs of women and girls to be incorporated in all decisions related to repatriation and resettlement, rehabilitation, reintegration and post-conflict reconstruction.

The report-prepared by two independent experts with support from UNFPA, the United Nations Population Fund-highlights the prevalence of violence against women, before, during and after armed conflicts. The experts, Elisabeth Rehn of Finland and Ellen Johnson Sirleaf of Liberia, based their findings on firsthand data and testimonies of women who were victims and survivors of wars in 14 areas around the world. The experts collected the data during visits by to many of the world’s conflicts, starting with East Timor and Cambodia; then moving to the Balkans; Israel and the Occupied Palestinian Territories; Colombia; Africa’s Great Lakes region; Somalia; and Sierra Leone, Liberia and Guinea.

Women are particularly vulnerable to the threat of HIV/AIDS in conflict situations, warns the report. "Women are more susceptible to infection than men, yet often have little control over their sexuality," it notes. "At the same time, they are forced by conflict conditions to trade sex for money, food shelter and any other number of necessities." Fuelling the spread of HIV/AIDS are sexual violence and exploitation, all too common in conflict and post-conflict settings. "Rape by an infected man directly exposes women to the virus," says the report, "while often leaving lasting psychosocial consequences, including depression, stigma and discrimination, which can leave women into further cycles of exploitation."

Despite increased awareness of its importance in emergencies, reproductive health care is not yet an intrinsic part of humanitarian response plans. The reason, says the report, is “partly because the humanitarian community has had difficulty internalizing gender and partly because funds have fallen short.”

“Women do not receive what they need in emergencies,” according to the report. They need sufficient food, safe drinking water, protection from violence, basic primary and reproductive health care, and psychological support. Even though war-affected women have greater needs, they often end up with few, if any, services.

The report recommends that UNFPA should take the lead in providing reproductive health and psychological services to women affected by conflict, with special attention to those who have experienced physical trauma, torture and sexual violence. Such services, it says, should be an integral part of all emergency assistance and post-conflict reconstruction.

Means already exist to protect women’s health in complex situations, notes the report. That includes the Minimum Initial Service Package of supplies and interventions, developed by a consortium of non-governmental organizations and United Nations agencies to help women in emergencies. Another example is a United Nations inter-agency field manual with detailed guidelines for basic care during emergencies, and an accompanying set of pre-packaged reproductive health supplies. However, says the report, “it is tragic that basic health care for women affected by war must compete with food, shelter and landmine clearing.”

Thoraya Obaid of Saudi Arabia Named as Next Executive Director of UNFPA; Dr.…