HARARE, Zimbabwe – Fourteen-year-old Shamiso Nyamutamba has endured more than her share of tragedy. When she was three, her mother died. Two years later, her father also passed away. She went to live with an abusive uncle, and was nearly forced to marry an older man. She has only recently found peace – and the promise of a better future – with the help of a unique programme designed to empower adolescent girls, in the rural Mbire District of Zimbabwe.

This Saturday, 11 October, is the International Day of the Girl Child, and this year’s theme is “Empowering adolescent girls: Ending the cycle of violence.” Too many girls like Shami face entrenched discrimination and violence, abuses often abetted by deep poverty. But with knowledge of her human rights, and the support of other girls and women, this extraordinary girl was able to break free.

When Shami’s parents died, her grandparents could not afford to care for her. An uncle from Harare, Zimbabwe’s capital, offered to bring her to the city and enrol her in school. 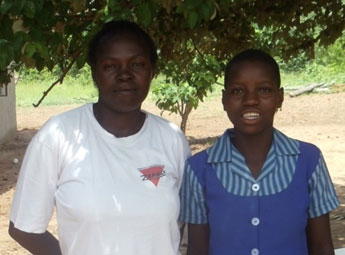 But when she arrived, he sent her to work instead. She performed menial jobs, even physical labour, and her uncle was often violent.

As she grew older, the abuse worsened. She recalls that one day, he told her, “l intend to go to bed with you.”

Shami reported him to an aunt, who took her away from Harare. This time, Shami went to live with her sister on a farm.

But her sister could not afford to send her to school. An attempt to obtain an education grant for orphans was unsuccessful. Finally, her sister sent her back to their home village in Mbire District to live with their grandparents.

They also could not afford to send Shami to school. She did menial jobs in exchange for food. Her grandparents hoped marriage might change her situation.

In the traditional practice of ‘kuzvarira’, poor girls are married off to men in more affluent families, often in exchange for food and other materials. Following this tradition, a marriage was hastily arranged between Shami and an older neighbour.

Around the same time, Shami learned about the Sista2Sista club, a girls’ empowerment programme run by the Zimbabwe AIDS Prevention and Support Organisation (ZAPSO), with support from UNFPA and other partners.

Launched in September 2013, the Sista2Sista club offers a safe place where vulnerable adolescent girls can speak with mentors and each other about their problems. Girls in the club learn about sexual and reproductive health and rights, financial literacy, and how to navigate difficult social situations, including coercive relationships. The programme also aims to give girls the confidence and self-esteem to stand up for themselves.

Girls in the village encouraged Shami to attend a session at the Kodzero Sista2Sista club. (‘Kodzero’ is a Shona word meaning ‘our rights.’)

“At first Shamiso was very quiet and isolated. She kept to herself a lot and took a long time to open up to me and the group,” said Memory Makanjera, the club’s mentor and facilitator. “I told her it is okay to tell me any problems you are facing. Feel free to talk to me anytime.”

After a few sessions, Shami told Memory about the impending marriage. Memory immediately alerted the police.

The marriage plans were quickly cancelled.

The club also encourages girls to get an education. With the intervention of the Sista2Sista programme, Shami was able to enrol in school. She has proven to be academically gifted.

She is now the chairperson of the Kodzero Sista2Sista Club, where she encourages other girls to join so they can learn the same lessons she did.

“Sista2Sista taught me that early marriage is wrong... and to report cases of abuse straight away,” Shami said.

The programme has so far had an enormous impact: Between September 2013 and September 2014, 10,388 Zimbabwean girls have enrolled and actively participated in Sista2Sista clubs. And many of these girls have committed to improve not only their own circumstances but those of other girls as well.

Shami, for example, says she dreams of becoming a police officer. “I want to join the police so I can protect other young girls from being abused,” she says.

With reporting from UNFPA’s partner ZAPSO.